You are here: Home / Entertainment / Star Wars Tech Toys in Time for The Force Awakens 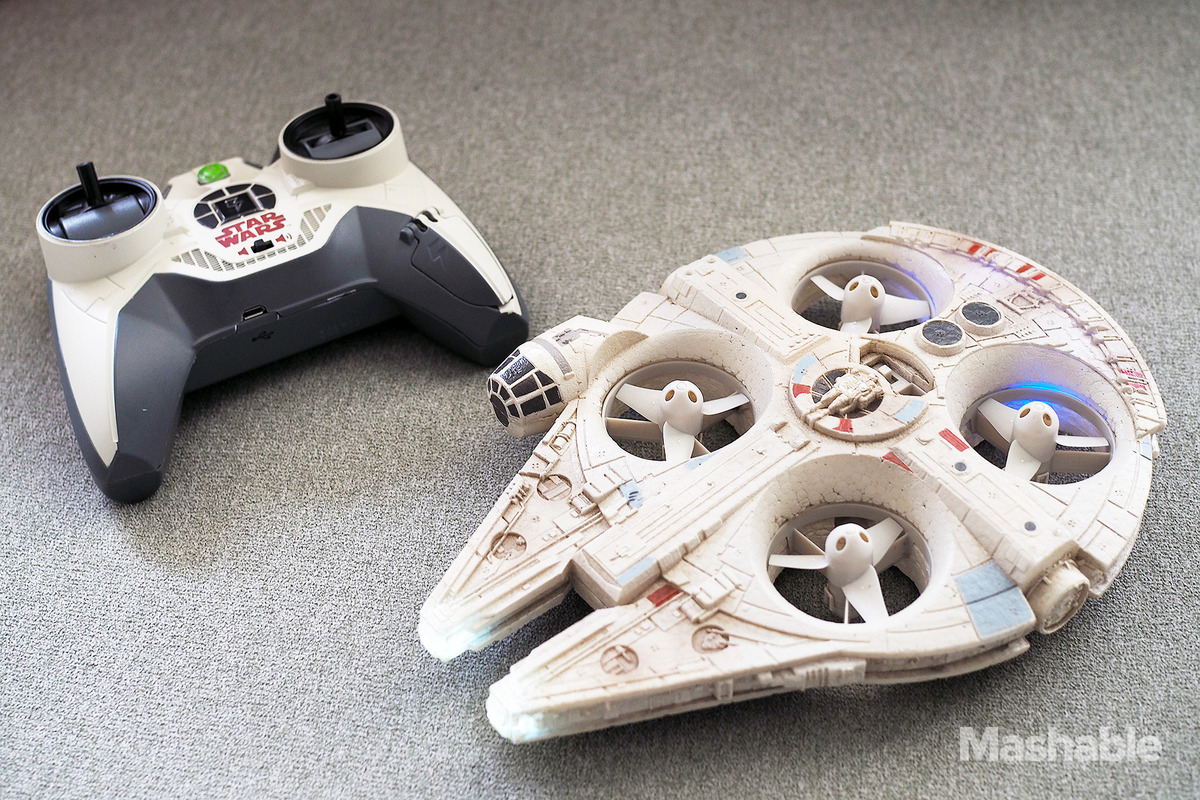 This is it. We’re down to the final stretch before Star Wars: The Force Awakens premieres — and Star Wars mania goes into hyper drive. (That is, if it hasn’t already for you the way it has for us.)

iPads, smartphones and whatever gadgets you’ve begged Santa for are great all year round, but how often does a new Star Wars movie with this much anticipation grip the entire world? To get you in the spirit, we’ve rounded up the best Star Wars tech toys for your geeky pleasure.

Every year, there’s a hot new tech toy, and this year, it’s drones. Combine a drone and a Millennium Falcon, and madness will ensue. Air Hogs’ foam Millennium Falcon drone is arguably the coolest Star Wars toy of the year. It’s remote-controlled, ultra durable, lights up, makes hyperspace sounds and flies up to 200 feet. The controls take a little getting used to, but once you get the hang of it, you’ll be having enough fun to forget the Internet even exists. $118 on Amazon.

“Cute” doesn’t even begin to describe BB-8, the new ball ‘bot that rolls around with Rey and Finn in The Force Awakens. Powered by Sphero’s robotic ball technology, this little BB-8 droid fits in the palm of your hand and is controlled with a smartphone. The app also features a few nifty augmented reality/pseudo hologram features that would make R2-D2 proud. $179.99 on Amazon.

Remember Furbies, those annoying toy pets from the ’90s that you wanted to throw at the wall because they’d just never shut up? In what feels like a natural mating, Furby and Chewbacca have come together to create Furbacca. You can feed it, bathe it, play games with it — all the domesticated stuff you’d never dare do with a Wookiee. Our favorite feature is how its eyes can light up with X-wing fighters and Imperial Star Destroyers, depending on its mood. $79.99 on Amazon.

Lightsabers never go out of style, and Hasbro’s FX lightsabers are the best mix of prop and toy. Kylo Ren’s crossguard Ultimate FX Lightsaber lights up in Sith red and roars to life with authentic lightsaber sounds when you strike objects with it. Best of all: When the movie hype is over, you can still whip it out on Halloween or at at comic con. $64.99 at Toys R Us.

Sphero’s BB-8 is faster and more sophisticated, but it’s also not cheap. Hasbro sells a remote-controlled version that’s less advanced, but still rolls around and makes indecipherable droid sounds. Like we said in our review, even when it fails, it’s charming. It’s also way bigger than the puny Sphero BB-8, so there’s that. $79.99 at Target.

Looking the part of the Galactic Empire’s most feared villain in is only half the battle: You’ve gotta sound like him, too, so that the Rebel scum will tremble in their boots right before you Force choke ’em. Hasbro’s Darth Vader Voice Changer Helmet is great for kids (and adults). It makes even the squeakiest of voices sound like James Earl Jones, the Sith Lord. $45.99 on Amazon.

When it comes to ransomware, you don't always get … END_OF_DOCUMENT_TOKEN_TO_BE_REPLACED

Peyton Carr is a financial advisor to founders, … END_OF_DOCUMENT_TOKEN_TO_BE_REPLACED