You are here: Home / Featured / Trump’s Shocking Answer On Respecting Election Results Is The Only Debate Moment That Matters 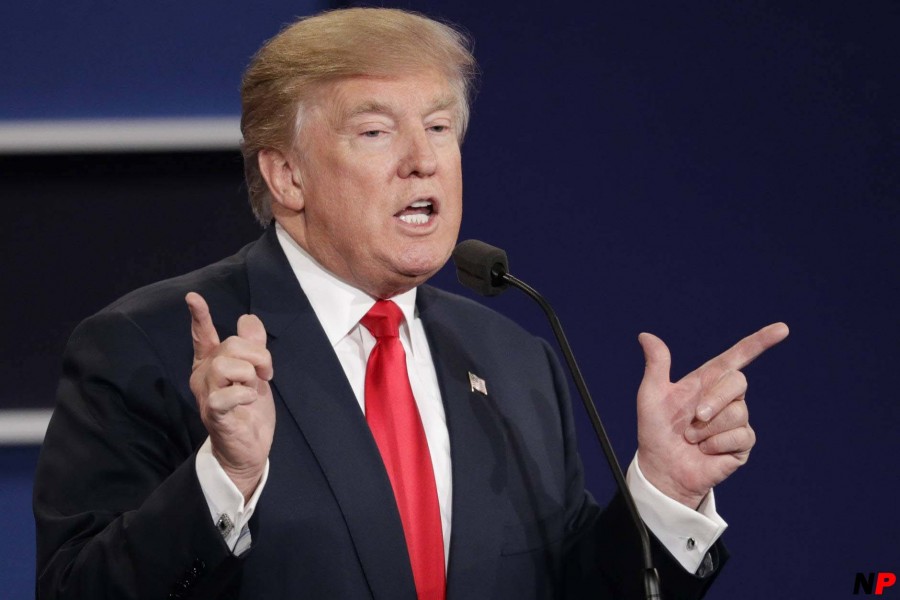 Donald Trump was on his way to his best performance in a presidential debate Wednesday night ― right up to the moment when he refused, twice, to say he would respect the results of November’s presidential election.

It overshadowed everything else that happened on the stage in Las Vegas and arguably told voters everything they need to know about the Republican nominee for president.

Trump’s answer shouldn’t have surprised anybody. For the last two weeks or so, Trump has been going on and on about “rigged” elections, riling up his supporters by warning that Hillary Clinton and her allies were trying to steal the election.

The argument has drawn widespread condemnation, even from fellow Republicans ― partly because his warnings of ballot stuffing in heavily minority cities have such obvious racial overtones, and partly because his pre-emptive questioning of the election results is way outside of the norms of American politics.

Election officials, many of them Republicans, have said Trump’s claims lack factual basis ― that, notwithstanding isolated cases of wrongdoing, there’s no evidence of widespread fraud. And Trump’s own advisers have tried repeatedly to downplay the statements by arguing that Trump was really just talking about media bias.

But Trump hasn’t backed off. Just two days ago, for example, Trump tweeted out that he was worried about media bias and election fraud.

And that’s more or less how the conversation played out Wednesday night.

Moderator Chris Wallace, who asked tough and substantive questions of both candidates, gave Trump a chance to clarify his remarks about the fairness of the election. Wallace noted that even Trump’s own daughter, Ivanka, had said that Trump would accept the results of the election, and then he put the question directly to real estate mogul: “Do you make the same commitment, sir, that you will absolutely accept the result of this election?”

Trump’s answer: “I will look at it at the time.”

Off stage, according to media reports, the audience reacted with an audible gasp. On stage, Trump went on to talk about “millions of people that are registered to vote that should not be registered to vote” ― and then, once again, attacked the media.

At that point Wallace interrupted Trump to point out the gravity of what Trump was saying ― and, basically, give him one more chance to walk it back, or at least qualify it somehow.

“Sir,” Wallace said, “there is a tradition in this country … that no matter how hard fought a campaign is, that at the end of the campaign, that the loser concedes to the winner. … that the loser concedes to the winner, and that the country comes together in part for the good of the country. Are you saying you’re not prepared now to commit to that principle?”

All Trump had to say was “of course I will.” Even a tentative, highly qualified assurance that he’d respect the democratic process would have probably done the trick. But Trump couldn’t bring himself to do that. Instead, he stood his ground, saying, “What I’m saying is, I’ll tell you at the time. I’ll keep you in suspense, OK?”

Clinton pounced immediately, calling the answer “horrifying.” But she didn’t need to say a word.

Trump’s comments about election fairness aren’t just unprecedented in modern American politics. They are also dangerous. In a recent Politico/Morning Consult poll, nearly half of Trump supporters said they were not confident that votes would be counted accurately. Trump is basically reinforcing those doubts, giving his supporters reason to question the legitimacy of the outcome on Nov. 8 ― and, potentially, convincing the most fanatical among them to act out.

And if Trump had already said similar things on the campaign trail, it was unsettling ― shocking, even ― to hear him say it on a debate stage, speaking to a national audience.

After the debate, Trump’s supporters did their best to clean up the mess. Campaign manager Kellyanne Conway and former New York Mayor Rudy Giuliani tried to suggest that Trump’s statements weren’t really so awful because Al Gore, in 2000, had also questioned the election results. But Gore had done so after the vote, when the close outcome in Florida had forced a recount and ballot problems left uncertainty about the winner (and in which, by the way, there was actual evidence of Republicans using their control over state government to tilt the result).

Other Republican leaders, like GOP communications director Sean Spicer, offered stronger reassurances. “We expect to win this race, so it’s not going to be an issue, but regardless, we will accept the will of the people,” Spicer said.

For Spicer and other Trump supporters, it must have been incredibly frustrating ― because, until that point, the real estate mogul was having a decent night, at least by his standards.

To be clear, Trump had seemed unsteady at times and already told some big lies, like saying Clinton would double everybody’s taxes. He began a discussion about the Supreme Court by noting that Justice Ruth Bader Ginsburg had insulted him, as if his feelings were more important than, say, the meaning of due process.

But Trump wasn’t interrupting Clinton as frequently as he did in previous debates. He even made some cogent, forceful arguments about immigration and trade ― issues that potentially play well in the industrial Midwest and probably represent his best opportunity to pick up normally Democratic votes.

And Clinton, for her part, had some conspicuous lapses. When Wallace asked her about potential conflicts of interest while she was at the State Department and her husband was busy raising money for the Clinton Foundation, she basically dodged the question and started talking about the foundation’s good works abroad.

Trump could have pounced on Clinton’s evasiveness. He didn’t. And with his answer on the legitimacy of the election, Trump shifted the conversation away from policy or Clinton’s ethics and onto a much more fundamental issue ― support for basic principles of democratic government.

It says something about this election, and the Republican nominee, that such support is even in doubt.

When it comes to ransomware, you don't always get … END_OF_DOCUMENT_TOKEN_TO_BE_REPLACED

Peyton Carr is a financial advisor to founders, … END_OF_DOCUMENT_TOKEN_TO_BE_REPLACED