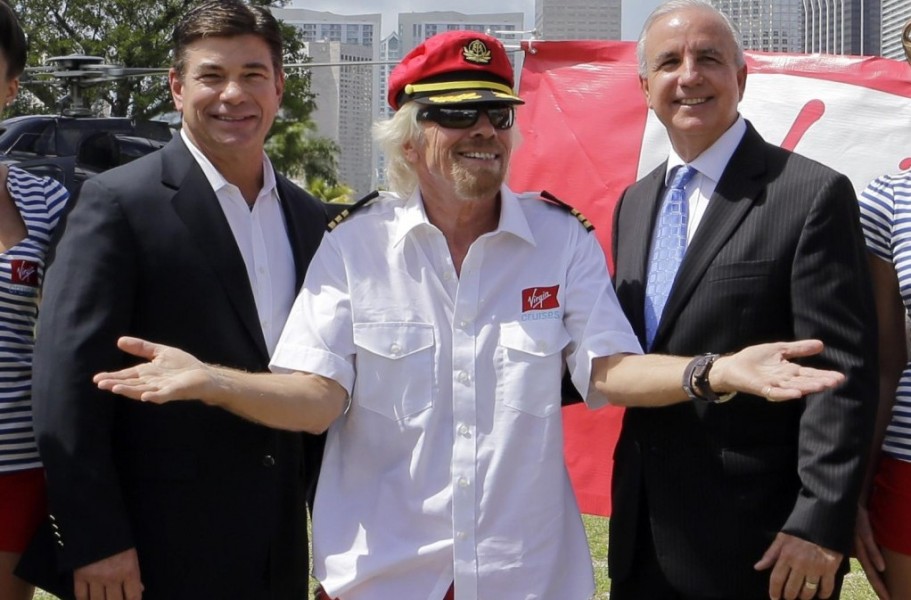 During a presentation at the Faena Hotel Miami Beach, Branson made a surprise cameo as a cabana boy in a theatrical presentation, bearing towels and a bottle of bubbly, as two female performers clad in red swimwear danced on deck chairs in front of the audience of media and special guests.

It wasn’t as nearly as grandiose an entrance as in summer 2015 when he arrived by helicopter on the grounds near the Perez Art Museum Miami flanked by models in sailor suits, to first announce major details about the project, then called Virgin Cruises.

Still, it had a flair for the dramatic set against the backdrop of the velvet-red designed interior of the Faena’s Saxony Theater.

In addition to revealing the name change, Virgin Voyages CEO Tom McAlpin also announced the company has officially signed a contract with Italian shipbuilder Fincantieri for three mid-sized ships that will accommodate more than 2,700 passengers.

However, travelers will have to wait a bit longer to hear more about the design and amenities to be offered aboard its cruise ships as little new details were released Tuesday.

In a promotional video, Virgin Voyages, to be based in Miami, touted its new cruise experience as “the only way to travel for the free spirits, for you pirates, you explorers, you mermaids … This is a holiday you can’t predict and a place where irresistible style has finally found its sea legs.”

Branson described the ship designs as “incredibly exciting,” but said they were “under lock and key” as the new venture is still a few years from launching and he doesn’t want to show their hand to other cruise lines just yet.

Branson also offered some insight into its recent name change.

“I’ve been giving it a lot of thought,” said Branson, founder of London-based Virgin Group, which also includes Virgin Mobile, Virgin Trains, Virgin Vodka, Virgin Records and other entities. “The name ‘cruise’ is pretty awful, so I don’t like that … it’s pretty dull and boring. I’ve never been on a cruise ship. I’ve never fancied going on a cruise ship, but I do fancy going on a voyage.”

The new cruise venture — a partnership between Virgin Group and Bain Capital Private Equity — is close to finalizing financing for the three ships, McAlpin said. Those ships are expected to be delivered in early 2020, 2021 and 2022, with the first based at PortMiami.

“This is a multibillion-dollar financing contract, so clearly this is a significant transaction,” McAlpin noted.

Additionally, as part of its environmentally-friendly initiatives, Virgin Voyages is partnering with Swedish clean energy company Climeon. On each of its ships Virgin plans to install six Climeon Ocean systems to transform low-grade energy into clean electricity, McAlpin said.

“This means that up to 5,400 tons of carbon dioxide will be saved on an annual basis [per ship],” he said. “It would take 180,000 trees 30 years to absorb this much carbon dioxide, so this will provide a tremendous positive environmental impact.”

When it comes to ransomware, you don't always get … END_OF_DOCUMENT_TOKEN_TO_BE_REPLACED

Peyton Carr is a financial advisor to founders, … END_OF_DOCUMENT_TOKEN_TO_BE_REPLACED