You are here: Home / Lifestyle / 10 Best Sandwiches from 10 States 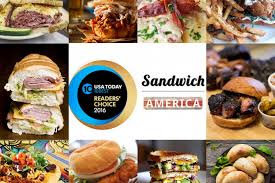 10Best and Sandwich America are back with 10 more sandwiches from 10 states, and we need your vote! The sandwich is one of the most ubiquitous American foods, and just about every state enjoys a distinctive variation of meat and cheese between some form of bread. USA TODAY 10Best and Sandwich America are teaming up once again to find 10 more of the nation’s best sandwiches.

Local experts and chefs have nominated 20 stellar sandwich spots in each state, and now we need you to help choose the winners. Vote for your favorite sandwich in each category once per day until polls close on Monday, June 6 at noon ET. Winning sandwiches will be announced on Friday, June 10.

Click on each category below to vote, and remember, you can vote once per day!

The Hass avocado is native to California, and the state has some 4,000 growers, so it’s easy to see why this creamy, healthy-fat-filled vegetable comes in all sorts of sandwiches throughout the state. B.L.A.T., California Club, Powerhouse … this ingredient has so permeated the California sandwich world that there are more variations of an avocado sandwich in California than perhaps any other sandwich category.

The term “barbecue” in North Carolina is nearly synonymous with pork, and it’s a big part of the state’s history. There are two distinct types of barbecue that have developed over hundreds of years in North Carolina: chopped and pulled. Both are typically served with slaw on a soft bun.

Created in 1908 at Nick’s Kitchen in Huntington, Indiana, the breaded pork tenderloin sandwich is hard to find outside the region. Hoosiers are proud of their state sandwich and believe everyone traveling through owe it to themselves to try a good breaded Indiana tenderloin.

Burnt ends are what you call the pieces of meat cut from the part of a smoked brisket often referred to as the flat. Parts of the brisket, like the point, take longer to fully cook and the “ends” can become crispy or burnt by the time the point is fully cooked. This part of the brisket is considered a delicacy in the barbecue world – particularly in and around Kansas City – and is often made into delicious sandwiches.

How serious are Sooners about their chicken fry? In 1988 the Oklahoma state legislature included chicken fried steak in the official Oklahoma State Meal.  It starts with a piece of beef or chicken straight off an Oklahoma ranch that is tenderized, breaded in a special blend of seasonings and fried. Many Sooners will judge an establishment on their chicken fry and if that doesn’t pass muster, they won’t try other dishes.

Although the name says “taco” the fry bread taco is not made with a tortilla and is not actually a taco.  In fact, it’ss made of a quick bread credited to the Navajo tribe, and is fried and wrapped around taco like toppings such as meat, beans and cheese or served as an open faced sandwich. It is consistently listed as the sandwich of Arizona and combines the Mexican and Indian heritage that is so rich in the state.

Unlike many iconic American sandwiches, there is absolutely no doubt as to the origin of the Hot Brown. In fact its name includes its origin. It was originally created at the Brown Hotel in Louisville and is an open faced sandwich with turkey and bacon covered in a Mornay sauce (cheese sauce) then broiled until bubbly and brown and topped with bacon and tomato.

Depending on where you are in New Jersey, this Italian sandwich could be called a hoagie or a sub. No matter what it’s called, it’s a delicious combination of meats, cheeses and spices that made its way to New Jersey by way of southern Italian immigrants.

A pasty embraces everything we love about sandwiches: a meal in portable form. Although you could argue it’s not technically a sandwich, it’s got meat and cheese surrounded by bread, and that’s good enough for us! Many ethnic groups in Michigan adopted the pasty as a quick meal while working the mines of the Upper Peninsula.

The story goes that Reuben Kulakofsy, a Lithuanian-born grocer, invented the Reuben sandwich for his weekly poker game held at the Blackstone Hotel in Omaha around 1925. The sandwich soon appeared on the hotel menu and on other menus around the state.

Remember you can vote once per day in each category, so vote now and vote often, and may the best sandwich win!

When it comes to ransomware, you don't always get … END_OF_DOCUMENT_TOKEN_TO_BE_REPLACED

Peyton Carr is a financial advisor to founders, … END_OF_DOCUMENT_TOKEN_TO_BE_REPLACED