You are here: Home / Business / 1000’s of Christmas Trees exhibited at St. Mary’s Church in Leicester 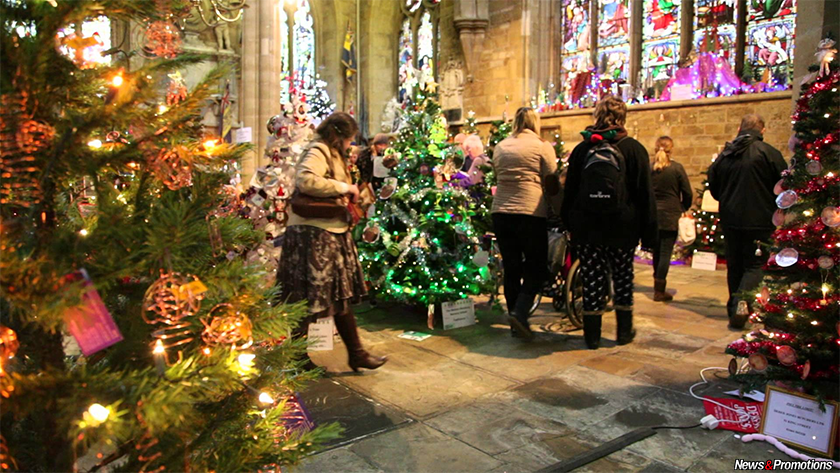 The spirit of the winter holidays can be felt in a church from the Great Britain where are exposed no less than 1378 Christmas trees, during a festival with tradition. The Saint Mary’s Church of Melton Mowbray from Leicester, exceeded by this performance the own record established last year by adding to the collection 124 Christmas Trees, informs Xinhua. Thousands of people visited the church to admire this exhibition. The representatives of the church described the event as one of the greatest Christmas Festivals in the Great Britain. The biggest part of the objects in the exhibition are the Christmas trees, but there are also some unusual exhibits, like an embroidered stair.

The exhibited trees are made by companies, schools, organizations, local communities, and the collection includes an exhibit from the United States, according to the BBC. One of the trees, decorated after a Victorian theme, is accompanied by two locals disguised as the Queen Victoria and Prince Albert. The ‘saddest’ sculpture from the collection is the one dedicated to the inhabitants of the Syrian city Alep, a simple Christmas tree, with no decorations. According to Ian Neal, the organizer of the event, the first edition of the festival was held 14 years ago, with only 100 Christmas trees.

‘The event is organised by a committee and a group of dedicated volunteers who take their time to work hard for hours to ensure that the festival is a great success’, he said. At the last year’s edition of the festival were gathered 20,000 pounds for charity, is also specified by the BBC. The St. Mary’s church dates from 1170, being extended in the 13th century and 14th century. Today, the building is considered one of the most beautiful churches in Leicester-shire and from January 2017 it will enter in renovation.

When it comes to ransomware, you don't always get … END_OF_DOCUMENT_TOKEN_TO_BE_REPLACED

Peyton Carr is a financial advisor to founders, … END_OF_DOCUMENT_TOKEN_TO_BE_REPLACED