You are here: Home / Entertainment / 13 Streaming Scary Movies For Your Next ‘Netflix And Thrill’ 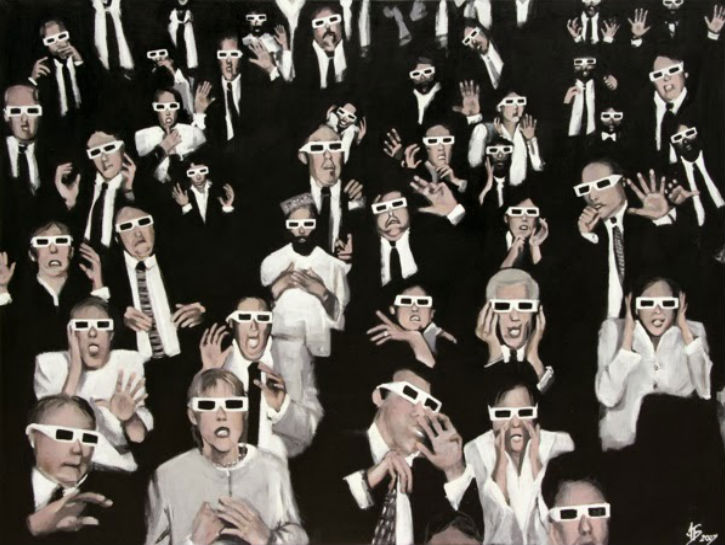 What’s so fun about being scared? Perhaps it’s easier to work through real-life fears when you can experience imagined ones in a spooky book or an on-screen monster. Maybe it’s because the calendar reads October and it simply feels like the right time to shrink into your turtleneck or bite your nails in fright. It could be the rush of chemicals activated by your innate “fight-or-flight” response when you run into that creepy clown in a haunted house.

Whatever the reason, you don’t have to travel further than your couch to experience some thrills and chills this fall. Whether you use Netflix, Amazon Prime, Hulu or — let’s be real — all three, you’ll find something for your specific scary style.

This isn’t your typical horror film. From the minute you realize Lysa Arryn from “Game of Thrones” is in it, you’re terrified. Shivers will be sent down your spine throughout this eerie tale, which takes place in 1630 New England. A Puritan couple (Kate Dickie, Ralph Ineson) and their five children move to a secluded area of the forest after being cast out of their settlement. After their infant son disappears on their teenage daughter Thomasin’s (Anya Taylor-Joy) watch, utter creepiness, and witchiness, ensues. While her parents think she’s to blame, Thomasin uncovers who the real villains of this story are. “The Witch,” a hit at the 2015 Sundance Film Festival, is streaming now on Amazon Prime. — Leigh Blickley

The premise of most horror movies involves a looming, fatal threat, one the heroes narrowly evade again and again before defeating it for good. But what if that threat couldn’t be evaded? What if it was — dun dun dun — destined to follow you, taking on creative new forms, until you finally met your end? If you’re a control freak (like me!) or rely on illusions of control for comfort, this movie is your literal worst nightmare. In the first installment of the unnecessarily prolific franchise (really, “Final Destination 5”? Aren’t we getting a little paradoxical at this point?), high school kid Alex has a premonition of a plane crash. When he and his classmates never board the plane, they start dropping like flies, in increasingly gruesome ways (one unfortunate young woman is stabbed before dying in an explosion.) On the bright side, the slasher-y movie is so absurd that it’s not exactly immersive. You won’t feel like the story is happening to you, and can witness the gruesome campiness from a safe remove. — Maddie Crum

I saw “Rosemary’s Baby” for the first time at an independent movie theater in Manhattan’s West Village in 2002, 34 years after its original release. The psychological horror film, directed by Roman Polanski, follows Rosemary and Guy Woodhouse (Mia Farrow and John Cassavetes), a young couple who move into a New York City apartment and face a string of peculiar occurrences. If you’re like me and somehow managed to reach your 20s without seeing this classic, then do yourself a favor and stream it on Amazon Prime this month. Perhaps film critic Roger Ebert summed it up best in 1968, “It is a creepy film and a crawly film, and a film filled with things that go bump in the night.” —Lauren Moraski

“The Woman in Black”

“The Woman in Black” is oddly a lot like “Harry Potter and the Chamber of Secrets.” An evil specter is stealing kids away, there’s writing on the walls in blood, and it’s all up to Harry Potter, aka Daniel Radcliffe, to stop it. Fun, right? Only this time, instead of the Dark Lord doing his fun little anagrams — I Am Lord Voldemort, real cute, Tom — it’s a murderous ghost calling kids to die by suicide, there’s a scary house full of creepy-as-hell dolls, and there’s no Fawkes the Phoenix to save him. Even Voldemort would be like, ”This is Fawked up.” — Bill Bradley

Plastic surgery bandages have never been quite so unsettling as in Veronika Franz and Severin Fiala’s “Goodnight Mommy,” a quietly terrifying German-language film that came out in 2015. Former HuffPost writer Erin Whitney called it “the year’s most terrifying movie.” Twin brothers, both 9, are living in a stark, tucked-away home in the Austrian countryside, when their mother (or, a woman who purports to be her) returns from surgery with a face wrapped in bandages. As Whitney writes, the film “builds tension with unnerving imagery that, while familiar, becomes increasingly uncomfortable to watch.” And, hey, it makes for a fairly quick Halloween costume. ― Jillian Capewell

“Silence of the Lambs”

If you don’t flinch at the sight of Anthony Hopkins reciting the line, “I ate his liver with some fava beans and a nice chianti,” before he hauntingly mimes aerating said Chianti with his lips and teeth, you have no soul. The reason “Silence of the Lambs” is so scary, my grade-school self would explain confidently, is because the thought of a seemingly intellectual man moonlighting as a merciless cannibal seems HORRIFYINGLY plausible. (I’m pretty sure this movie is the reason I hesitate seeing a psychiatrist when I probably should.) But beyond the terror, I’d watch this over and over again just to hear Jodie Foster’s sweet Southern accent. “Lambs,” my childhood best friend imitating Clarice would sputter at me. “The lambs were screaming.” Guys, she won an Oscar for that. Not my friend. Jodie. ― Katherine Brooks

I remember going to see “BWP” in high school with my family. The buzz around it was that it was a new template for filmmaking, the “found home movie footage” genre, and it was made for almost no money. The film chronicles three friends and their documentary film about the local legend of the murderous Blair Witch. I don’t think my parents were ready for the shaky camera effect, but I loved it. This new “found footage” format had that tinge of realness that, if used right, could be genuinely terrifying. Little did I know that this movie would spawn so many terrible big-studio films trying to capitalize on the same idea. But because this was such a stripped-down production, because it was so low-fi, it benefited from grainy footage and the “less is more” approach. And the intensely creepy ending makes the whole film worth it. — Andy McDonald

Is there anything more frightening than a rich, fragile narcissist who views women as sexual objects and the world as his plaything? There’s something especially sinister about “American Psycho” — based on the novel by Bret Easton Ellis— given the current political climate. It tells the story of Patrick Bateman, played by Christian Bale, a hot, rich, playboy who has everything he could ever want … except for actual human emotions. This fact becomes painfully clear when he develops a soft spot for murdering women with chainsaws. Boys will be boys, amiright? — Priscilla Frank

This teenage horror flick is better for a few quick thrills than deep, psychological disquiet. The 2001 film stars two gothy sisters whose macabre hobbies turn into a Big Deal once one sustains a bite from a werewolf. Ginger’s transformation into a blood-thirsty creature aligns neatly with her ascent into womanhood, turning what could’ve been a run-of-the-mill scream fest into a sharp commentary on growing up in suburbia as a girl — just make sure you’re not too squeamish about movie blood. (FYI, for another classic, bloody film about womanhood, “Carrie” is also available on the streaming service.) — JC

Amelia, a single mother, can barely hold it together. Her young son Sam is obsessed with monsters and constantly building weapons to protect his mother from the creatures that roam his imagination. Exhausted and frustrated by his behavioral issues and constant nightmares, Amelia has little time for herself, especially to emotionally cope with the death of her husband years before. Things get way worse, however, when a monster from one of Sam’s pop-up books begins haunting the family. Yes, the Babadook, a terrifying mixture of Freddy Krueger and The Cat in the Hat, who has grotesquely long fingernails and just will not quit terrorizing this poor family. The film, directed by Jessica Kent, is scary in the most heart-stopping of ways, capitalizing off both those childhood fears that never go away and the most frightening aspects of being an adult — or more specifically, a parent. The film is also a stunning and surprising meditation on grief and its ability to make a monster out of anyone. — PF

Crisis! “The Invitation” flew under the radar when it hit theaters earlier this year, and it’s worth so much more than that. Its intimate premise balloons to haunting proportions when a couple is invited to a dinner party, only to discover their hosts are a bit more, um, cultish than expected. That sounds like the makings of a torture-porn buffet, but “The Invitation” is far cleverer than that. It’s best experienced without much knowledge about the plot. The twisty thriller ends with one of the most surprising finales I’ve seen in a horror movie, raising questions about the magnitude of the macabre events that could be happening right outside your window this very second. ― Matt Jacobs

I’ve never seen the “Amityville Horror,” but seeing the commercials for the 2005 version alone stole nights of sleep from me while I was growing up. I don’t remember how old I was, although it was probably too old to acceptably be so scared of a movie trailer repeatedly playing during Sunday football games. The concept that a house itself could be haunted and that it “happened” in “real life” destroyed me. Every night, I would see ghosts out of the corners of my eyes, hear demons in the walls and know for sure that a reanimated body was hiding under my bed. If you can’t feel safe in your own home, are you truly ever home at all? Have fun and don’t tell me what happens, unless the twist at the end is that the house in Amityville wasn’t even haunted and it was just local teens playing a prank/up to no good. That sounds more fun. ― Todd Van Luling

Looking for a movie that has both comedy and suspenseful horror? “The Host” is it. This Korean monster film centers around a father whose young daughter is taken by a Godzilla-like deformed fish. As he attempts to find her with the help of his father and siblings, terror and confusion surround him. Note to self: never dump 200 bottles of formaldehyde down the drain. — LB

When it comes to ransomware, you don't always get … END_OF_DOCUMENT_TOKEN_TO_BE_REPLACED

Peyton Carr is a financial advisor to founders, … END_OF_DOCUMENT_TOKEN_TO_BE_REPLACED