You are here: Home / Sports / 2015 Belmont: American Pharoah and the Other Contenders 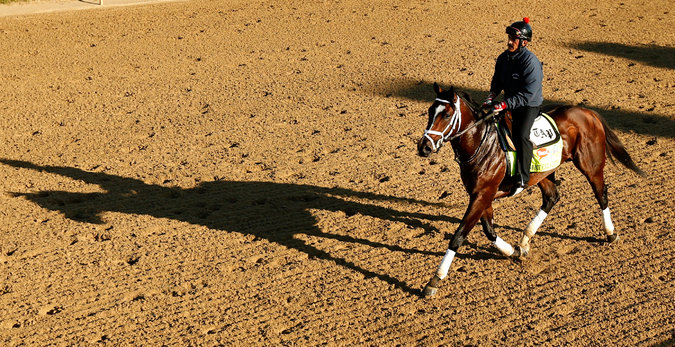 After winning the Kentucky Derby and the Preakness, American Pharoah is the favorite to also take the Belmont and become the first Triple Crown winner since 1978. But he will face a fairly large field, including some talented horses who are well rested after skipping the Preakness.

The Belmont field will not be set until Wednesday, but here is an early look at some of the possible entrants, ranked in approximate order from contender to pretender.

American Pharoah has a six-race winning streak, has beaten all of the major contenders and is a worthy favorite. But the question marks are there.

It is hard to fault his impressive Kentucky Derby. But his seven-length victory in the Preakness is difficult to judge because of the monsoon that led to a ridiculously sloppy track, the kind that usually benefits front-runners like him. Probably because of the conditions, his main rivals, Dortmund and Firing Line, ran poorly; the second-place finisher wound up being the mediocre Tale of Verve.

Moreover, at a mile and a half on a deep sandy track, the Belmont is a strange and challenging race that has been the Waterloo for numerous stars. The roster of winners in recent years includes more shocks than favorites. Since 2000, eight winners were at least 10-1, and three were 30-1 or more. Only two were favorites.

Many will be rooting for American Pharoah to make history. If he wins the Belmont, he will have earned it.

Materiality could be your play if you do not like the prospect of betting American Pharoah at a short price. Going into the Derby, he was three for three and had the highest Beyer Speed Figure in the field. In a race in which most of the contenders got pretty good trips, he did not. He broke poorly, was way back and wide early, then showed good energy to rally to be sixth. Like several others in the Belmont field, he skipped the Preakness, which has been a good pattern for Belmont winners in recent years, including Palace Malice in 2013 and Union Rags in 2012.

Frosted, the Wood winner, also closed late in the Kentucky Derby, finishing fourth, only three and a quarter lengths back. His trip was perhaps not quite as bad as Materialityâs, and his pre-Derby races on balance were not quite as good. But he, too, is rested and ready to spoil a Triple Crown.

Madefromlucky was beaten twice by American Pharoah in Arkansas and skipped the first two legs of the Triple Crown. Instead, he raced and won the Peter Pan at Belmont. Last yearâs Peter Pan winner, Tonalist, went on to win the Belmont.

Carpe Diem was the third favorite in the Kentucky Derby because many bettors were impressed by his win in the Blue Grass. But that race was run slowly, and sure enough, he was exposed badly in the Derby, running 10th and never contending.

Mubtaahij had some backers in the Derby after winning a $2 million race in Dubai by eight lengths. But the field that day was suspect, and he ran a sluggish eighth in Kentucky.

Tale of Verve was the surprise Preakness runner-up after having won only a maiden race. It is possible the colt is improving rapidly. It is more probable that the sloppy track and teeming rain made the race a fluke.

Keen Ice and Frammento were seventh and 11th as long shots in the Derby. Though they too will benefit from rest, they cannot rate higher than the others who skipped the Preakness.

The Truth or Else was stomped by American Pharaoh in Arkansas, is 2 for 12 lifetime and has lost all five of the Grade 1 and 2 races he has contested by 10 lengths or more.

When it comes to ransomware, you don't always get … END_OF_DOCUMENT_TOKEN_TO_BE_REPLACED

Peyton Carr is a financial advisor to founders, … END_OF_DOCUMENT_TOKEN_TO_BE_REPLACED