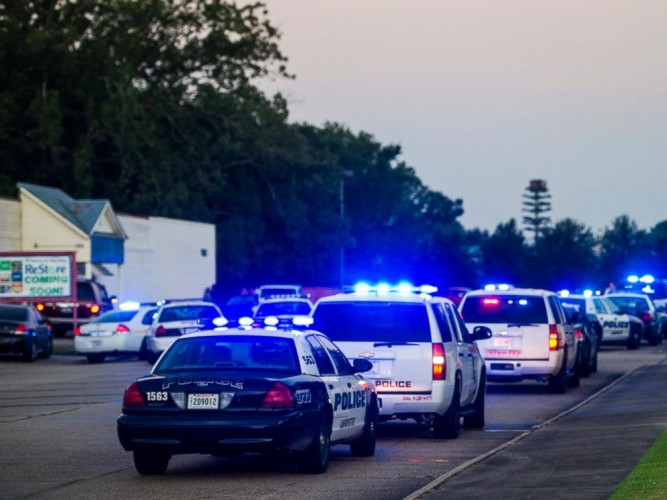 A gunman opened fire inside a packed movie theater in Lafayette, Louisiana Thursday night, and the shooter is among three people who died, police said.

Nine others were injured. The gunman died from a self-inflicted wound, officials said.

The shooting occurred at the Grand 16 Theater on Johnston Street where a screening of Amy Schumer’s “Trainwreck” was reportedly playing. Conditions of those injured range from non-life-threatening to critical and their ages ranged from the late teens to their 60s, Lafayette Police Chief Jim Craft said at a news conference.

The shooting comes one week after James Holmes was convicted of killing 12 people and wounding 70 others in a movie theater in Aurora, Colorado.

Police said they believed one person had been released from the hospital as of early Friday morning. They also said that one person was in surgery and not doing well.

Gunfire broke out around 7:30 p.m. in one of the movie theater’s auditoriums, Lafayette Police told ABC News. According to the Associated Press, the movie “Trainwreck” was playing at the time.

More than 100 people were in the theater, according to Louisiana State Police.

The shooting was contained to one theater, according to Craft.

The identity of the shooter is known but is not being released, Craft said. The shooter was described as a 58-year-old man who appeared to be by himself in the theater. Police believe the shooter lives in a state outside of Louisiana.

Police said that he had a criminal history but it appeared to be old.

The motive for the shooting remained unclear.

Authorities checked suspicious packages inside the shooter’s car and the movie theater, but no explosive devices were found, Craft said.

Shaan Duke was watching a movie in an adjacent theater when he heard a gunshot, followed by an alarm.

After Duke left the building, the disabled veteran encountered a female victim who had been shot in the leg. Duke said he and another man aided the woman, and Duke carried her to a waiting ambulance.

“She needed help. She was in panic mode, and I tried to keep her relaxed by being calm myself,” he said. “During the moment of it all, I wasn’t thinking anything other than helping her. She was in a bad way.”

Jordan Broussard initially thought the situation was a false alarm.

“We had heard sirens coming and I was actually looking for smoke when we came out of the theater, and when we saw men with assault rifles we kind of realized, OK this is pretty serious, a pretty serious situation,” Broussard said.

Gov. Bobby Jindal, who arrived in Lafayette late Thursday, called the shooting a seemingly random act of violence at a news conference.

“Whenever we see these or hear about these senseless acts of violence, it makes us both furious and sad at the same time,” Jindal said.

Please join Laura and I in praying for those in Lafayette right now.

The FBI said in a statement: “The FBI New Orleans Division is aware of a shooting incident that occurred at a Lafayette area movie theater in which FBI Agents, along with state and local law enforcement have responded. Presently a joint law enforcement coordination is under way and further details will be shared once the information becomes available.”

The theater and its parent company, the Southern Theatres, did not immediately respond to a request for comment.

When it comes to ransomware, you don't always get … END_OF_DOCUMENT_TOKEN_TO_BE_REPLACED

Peyton Carr is a financial advisor to founders, … END_OF_DOCUMENT_TOKEN_TO_BE_REPLACED