You are here: Home / Weather / A Storm’s Brewing in the North Pacific 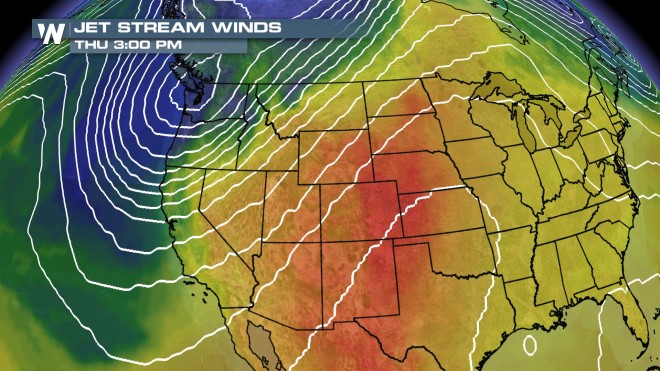 A storm system is brewing in the North Pacific, which will help to usher in an “Autumn-like” air mass to the Northwest later this week, and the High Plains for Labor Day weekend.

The Northwest has dealt with a lot of dry and hot air for much of this Summer. But just like we saw this past weekend, the next storm will bring about windy and rainy weather (especially for the coastal areas) which is a welcomed break from how this Summer has mostly been. Again, Portland, OR will be the focal point for the next storm this week.

On Friday, the forecast high will be in the upper 60s – temperatures which are typical of early October. This air mass is very typical for the Northern Pacific, and is full of moisture, which is good news for the firefighters battling wildfires in the interior sections of the Northwest. Cooler temperatures, coupled with more moisture in the atmosphere, could be the break firefighters need to knock down the active fires.

Some of the cooler air will make it to the High Plains for Labor Day weekend. After setting a record high over the weekend, Rapid City, SD, will see their temperatures fall into the 70s this holiday weekend. FYI, the average high for mid September is temps in the mid 70s. So Rapid City, SD will be getting to where they should be for this time of the year.

When it comes to ransomware, you don't always get … END_OF_DOCUMENT_TOKEN_TO_BE_REPLACED

Peyton Carr is a financial advisor to founders, … END_OF_DOCUMENT_TOKEN_TO_BE_REPLACED