You are here: Home / Sports / After Crash in Volvo Ocean Race, a Team Shifts Its Focus and an Event Changes Its Rules 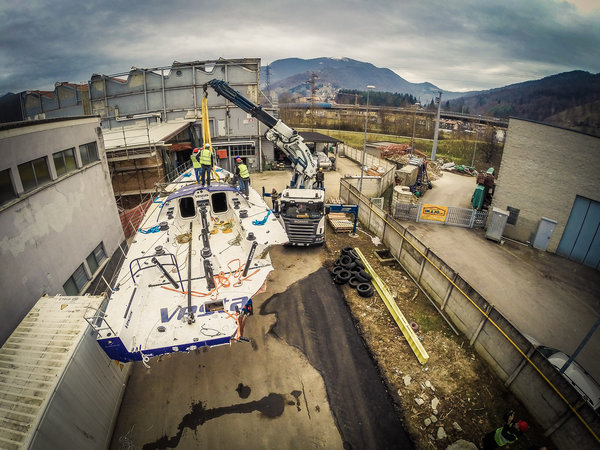 Even though Chris Nicholson entered the Volvo Ocean Race only two months before the start last October, his four races’ worth of experience made him a favorite in the around-the-world event. He believed he could win.

Nicholson, a champion sailor from Australia, had to recalibrate his aspirations after his Team Vestas Wind VOR 65 race boat crashed into a wave-swept reef in the Indian Ocean on the second leg of the race. The crash tore off the back of the boat.

The team rebuilt the boat in four months and rejoined the fleet last weekend in Lisbon for the final two legs of the 39,000-nautical-mile race. Nicholson’s second-place finish in Lorient, France, this week behind the all-women crew of Team SCA confirmed his high hopes for the team’s return, although he said last week that two podium finishes would be bittersweet.

“Everyone on our team has a lot of pride,” Nicholson said the day before the start of this week’s race from Lisbon to Lorient. “If we do show our potential, it will probably hurt even more, knowing we could have done well and had a chance to win the event.”

Team Abu Dhabi finished third in Lorient behind Team Vestas Wind, extending its overall lead in the race. Lessons learned from the Vestas teamâs accident have been implemented in the race, and navigational improvements will probably make their way to the average boater in the future.

On Nov. 29, the boat was reaching at speeds of nearly 20 miles per hour when it drove into the Cargados Carajos Shoals, an atoll 200 miles from Mauritius. The crew of nine was unhurt and left stranded on the reef. The stranded members were assisted by Team Alvimedica and were rescued after a harrowing night in breaking waves and razor sharp coral.

It took a month for Vestas, the sponsor, to commit to rejoining the race. The decision was made to painstakingly remove the mangled boat from the reef and rebuild it in half the original build time at Persico Marine in Genoa, Italy.

“We knew that our story could not end on that reef,” said Morten Kemp Jorgensen, the team’s communications director, in an interview this week. “We reshuffled our budgets and organization. This was a race to ensure that Vestas will be remembered as a team that overcame challenges.”

An inquiry into the accident revealed that the navigator, Wouter Verbraak, had not zoomed in enough on the boatâs navigation system to see the exposed reef. The inquiry stated that “at different times the navigator zoomed in on the electronic chart and came to the same incorrect conclusion.”

Since the inquiry, small changes have been made to the race’s rules. Officials have said there would be more.

“We became more aware of the zoom levels, for sure,” the race director Jack Lloyd said in a phone interview from Lorient this week. “We have recommended strongly that teams install different charting systems with more information. Each chart has what the manufacturer wants, but there are differences.”

Lloyd said that each navigator chooses his or her own navigation software, but that all the boats were provided with C-Map digital charts. According to the inquiry, the Cargados Carajos Shoals were not seen at the most zoomed-out display level. The race recommends that digital maps show reefs and islands at all levels of display, and Lloyd said the race was working with C-Map on such changes, which may eventually affect the average sailor.

“We are also reassessing the level of competency on each boat,” said Lloyd, who has been race director since 2008.

The accident highlighted the heavy reliance on electronic navigation, he said, although the race provides paper charts for all the seas the boats will be racing.

“But they’re stopping printing of paper charts, and some are quite old,” Lloyd said. “Some say they are not accurate, but digital charts have problems, too.”

Paper charts and the race-provided sextant are age-old navigation tools that Lloyd said are good backups - if the sailors know how to use them.

“It’s funny, it’s a new way forward,” he said. “We have to make sure the skills are there. There’s something useful about being able to spread out a whole chart of the Pacific and see every island.”

Nicholson is no stranger to high-seas calamity. In the 2005-6 race, he attempted to connect power to underwater bilge pumps before abandoning the sinking Spanish entry Movistar in the North Atlantic.

Nicholson said there were obvious technological changes to be made to help prevent the human error that led to the grounding of Team Vestas Wind.

“There has to also be an impact on the boating community purely from the story of the accident,” he said. “The sheer example of it will help prevent these accidents.”

Nicholson said he still felt pressure in the race, even though a top-three finish was out of reach.

“But that goes with the territory,” he said. “I don’t think we can have more pressure during the race than we had getting the boat here.”

Source: Free News Headlines Sports After Crash in Volvo Ocean Race, a Team Shifts Its Focus and an Event Changes Its Rules

When it comes to ransomware, you don't always get … END_OF_DOCUMENT_TOKEN_TO_BE_REPLACED

Peyton Carr is a financial advisor to founders, … END_OF_DOCUMENT_TOKEN_TO_BE_REPLACED