You are here: Home / Sports / After Punter Steve Weatherford Is in Wreck, He Practices With the Giants 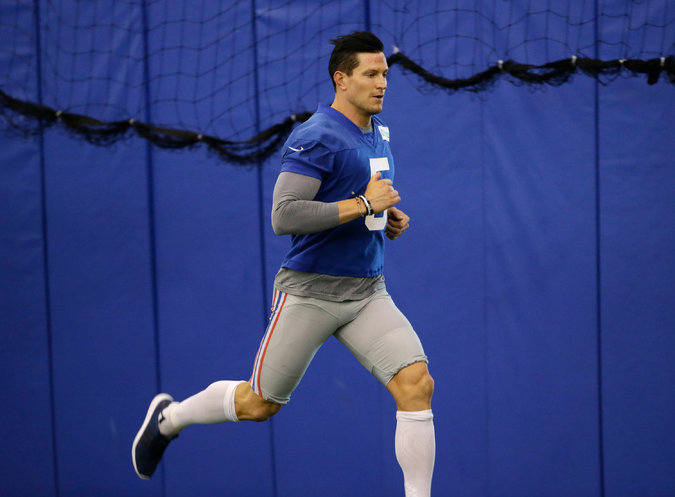 EAST RUTHERFORD, N.J. - A majority of the Giants’ off-season workouts are voluntary, although in the N.F.L., where contracts are not guaranteed, attendance is expected and most players comply.Last week, punter Steve Weatherford was home in San Diego for a few days while his wife, Laura, gave birth to the couple’s fourth child.

While Weatherford was rushing to get back to the Giants’ complex for Monday’s practice, his flight to Newark on Sunday night was diverted to Washington because of thunderstorms. He rented a car around midnight and was cruising on the New Jersey Turnpike about 45 minutes south of his Hoboken home when his car struck a large pool of water and began to hydroplane.

“I don’t know how many times the car spun around, and then it became clear I was going to hit the median,” Weatherford, who was not seriously injured, said Monday.

“I was blessed that the airbags worked, and while I had a busted lip and some cuts and burns, I was O.K. I walked out of the car and was just getting ready to call 9-1-1.”

But instead, Weatherford saw another car splash into the same pool of water and lose control. That car crashed into Weatherford’s vehicle. Weatherford said that he helped the other driver out of his car and that the two waited on the median for about 10 minutes until state troopers arrived.

Weatherford was driven home by the authorities.

“If this had happened at 4 in the afternoon with busy traffic all around instead of almost 4 in the morning, I’m not sure I’m here right now,” Weatherford said in the locker room.

He arrived at the training complex around 7 a.m., was checked out by team medical personnel and then participated in practice just after 11 a.m.

“’I’m feeling O.K., although some general, overall soreness is starting to set in,” Weatherford said. “But it actually felt good to be out there on the field. There was some normalcy to being at practice after an unforgettable day that was like no other day in my life.”

It was the second potentially life-threatening episode involving a Giants player this year.

Tight end Larry Donnell was on a jet that skidded off a snowy runway at La Guardia Airport in March. Donnell, who was uninjured, was returning to the Giantsâ headquarters to sign his contract.

“Thank God he’s all right,” Coach Tom Coughlin said of Weatherford. “That’s a scary, scary thing. It’s difficult to talk about. He wanted to get back to the field with his teammates.”

Weatherford mentioned that he had missed three workouts last week and that he had not previously missed an off-season training activity in his pro career.

“I was home doing the right thing by my family,” he said. “But I had to get back to my other family, too.”

The Weatherfords had a daughter, Josie Jaclyn.

“I was blessed, and then I was really blessed,” Weatherford said. “Not just the birth of my daughter, but just being here - being alive. It makes you realize how fragile life can be.”

Source: Free News Headlines Sports After Punter Steve Weatherford Is in Wreck, He Practices With the Giants

When it comes to ransomware, you don't always get … END_OF_DOCUMENT_TOKEN_TO_BE_REPLACED

Peyton Carr is a financial advisor to founders, … END_OF_DOCUMENT_TOKEN_TO_BE_REPLACED