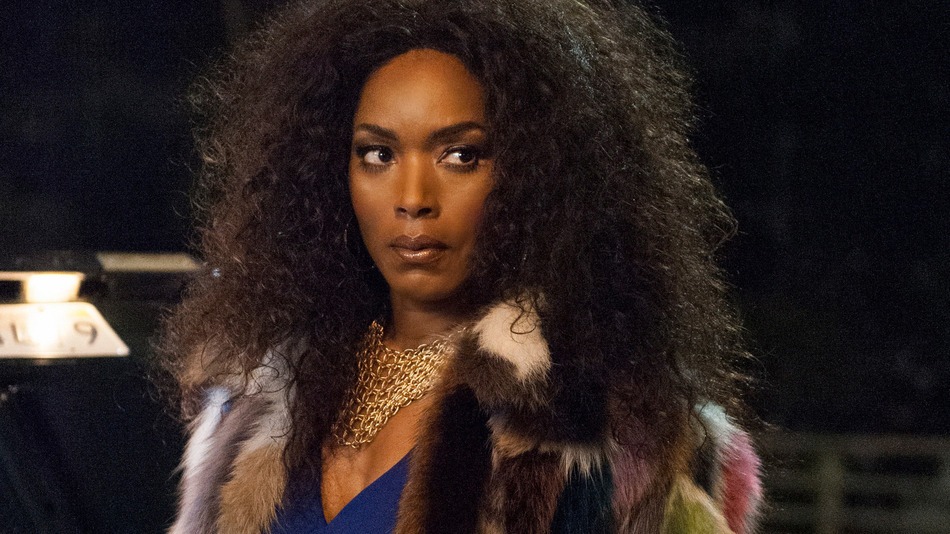 How many blood-covered lovers does Lady Gaga’s Countess have under her spell? The answer is not quite infinite, but probably close — and the same goes for her number of enemies, it seems. At long last, American Horror Story veteran Angela Bassett made her Hotel debut on the latest episode of the FX horror anthology. And what an entrance it was.

There were deep-tongued kisses exchanged with the Countess, blood poured from Gaga’s chest into Bassett’s mouth, and, in the end, heartbreak.

The episode, titled “Mommy”, pulls back the curtain on Bassett’s Ramona Royale, the star of such 1970s B-movies as Slaughter Sister, Silky Fine and Bride of Blackenstein.

We learn that she’s one of the Countess’ former flames, lasting from 1977-91, when Ramona fell in love with an up-and-coming hip-hop artist. Her affair with him was short lived, however, thanks to Countess Elizabeth, who helped the rapper put a bullet in his own head.

Turnabout’s fair play, they say, so Ramona has a blood feud of her own against her ex. She wants to kill what’s closest to the Countess: the little platinum blonde blood-sucking kids playing Tetris and other assorted arcades in the Hotel Cortez’s elaborate video game room. And she wants to use the Countess’ exiled boy toy, the jilted vampire Donovan (Matt Bomer), to accomplish that mission.

For now, Donovan has other worries on the table — like his mom, Iris (Kathy Bates).

Anyone who thought Iris was one of the many ghosts kicking around the Cortez was in for a rude awakening in “Mommy”, when she imbibed a lethal dose of heroin — enough to kill an entire marching band, according to Hypodermic Sally (Sarah Paulson).

Iris willingly walked into the drug overdose as a means of heeding her son’s advice to kill herself; Donovan blames her for everything wrong in his life, not the least of which is the immortal vampire curse he’s been saddled with. But after his encounter with Ramona, Donovan has a change of heart about his mom, and goes to such great lengths to save her life that he even converts her to his kind with his own blood.

Yep, that’s right: Vampire Kathy Bates is coming, just in time for next week’s Halloween episode. She joins the likes of Vampire Bassett and Vampire Gaga — and some form of Vampire Jessica Lange feels more and more inevitable, or at least desirable, with each passing week.

For her part, Countess Elizabeth is blissfully unaware of her outcast boyfriends and girlfriends, at least as far as we know. Instead, she’s much more transfixed on problems of the future. The episode teaches us a history lesson on the Countess’s finances — specifically, that she put all her money in the hands of Bernie Madoff. We all know how that turned out.

In order to dig herself out of her very deep hole, Elizabeth plans on marrying Will Drake (Cheyenne Jackson), the handsome man with an eye on owning the Hotel Cortez. She then plans to kill him and snatch up all his money.

It’s not a bad scheme, except for the not-so-small problem that he’s gay — by his own admission, and as evidenced by his steamy make-out sesh with murderous male model (and newly minted vampire) Tristan Duffy (Finn Wittrock).

Then again, considering Drake’s amorous tryst with Elizabeth during a late-night rendezvous at the hotel, maybe it’s not such an insurmountable issue after all. Really, given the three episodes of Hotel thus far, it’s almost impossible to imagine anyone resisting the Mother Monster’s seductive arts.

When it comes to ransomware, you don't always get … END_OF_DOCUMENT_TOKEN_TO_BE_REPLACED

Peyton Carr is a financial advisor to founders, … END_OF_DOCUMENT_TOKEN_TO_BE_REPLACED