You are here: Home / World / Arctic Drilling Ship Forced to Turn Around by Hanging Activists 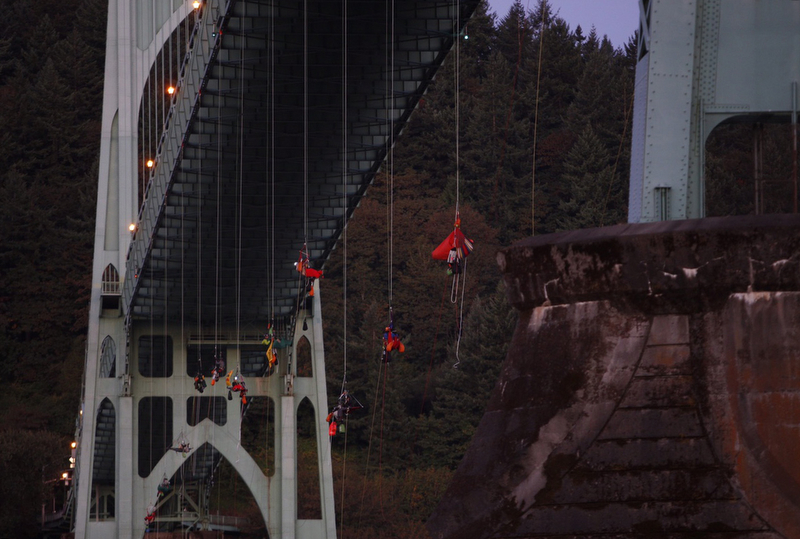 “Not today, Shell!” an anchor support yelled from a Portland bridge as 13 climbers hung below for the 29th consecutive hour. Cheers and chants were heard from land and water around 7:30 a.m. Pacific Time Thursday, as a Royal Dutch Shell ship slowly turned around in the water and retreated from the bridge.

The Arctic-bound ship stopped in its tracks Thursday during its second attempt to reach a Shell drilling site. The oil company aborted its first attempt early Wednesday morning, when Greenpeace activists rappelled off of St. John’s Bridge in Portland, Oregon with the support of assistants and “kayaktivists” on the water, two hours before the icebreaking vessel was scheduled to leave. The ship’s second attempt also failed.

The vessel, MVS Fennica, is meant to keep ice at bay during Arctic drilling and carries a crucial part of Shell’s spill response system, according to Kristina Flores, one of 13 anchor supports at the bridge, who documented the protest using Periscope.

“What we have on the water today is an eyesore,” she said. Activists considered the Fennica’s retreat a victory, but remained in position. Many climbers participating in the blockade, who risked arrest on felony charges, have access to social media. One live-tweeting climber posted when the ship retreated.

The fennica is headed back to its dock where it belongs – not the arctic! #ShellNo pic.twitter.com/wCwByWhgHD

The Dutch company’s Arctic drilling plans have been the subject of controversy for many years. Most recently, hundreds of Seattle protesters on kayaks and small boats arrived in Elliott Bay to keep the company’s drilling rigs at the port. They held signs and banners similar to those held by Portland protesters, which read “Shell No” and “Save the Arctic.”

Now, protesters are calling on President Obama to halt plans for drilling in the Arctic — something the administration just gave Shell final approval for last week.

“This is President Obama’s last chance to wake up and realize the disaster that could happen on his watch,” Annie Leonard, executive director of Greenpeace USA, said in a statement. “There is still time for our President to cancel Shell’s lease to drill in the Arctic, living up to the climate leader we know he can be.”

The climbers say they’re ready to stay put until they’re certain the Fennica won’t go to the Arctic.

“We’ve been here for 29 hours, and we’re ready to be here for another 29,” Flores said. Every day that the ship’s departure is delayed is another step towards ending Shell’s Arctic drilling plan.

“The window for drilling is closing, because there’s only a certain number of weeks that there’s no ice there, so Shell is really under time pressure to get that boat up there and we’re doing everything we can to delay that,” Leonard said.

Activists think the Fennica, which arrived in Portland for repairs on a meter-long gash in the side of the ship, is not prepared for the harsh conditions of the Arctic. And despite a section on its website addressing its Arctic drilling plan, Shell hasn’t done much to diminish the opposition to drilling in the Arctic. In late 2012, its oil spill response system failed “under very calm, tranquil conditions,” according to environmentalist Todd Guiton. “If it can’t handle the best we have here [the Pacific Northwest], I really have my doubts it can handle even a little adversity in the Arctic,” he said.

Later that year, Shell ships experienced engine failures and discharged “oily waste” into the Alaskan Arctic. Miyoko Sakashita, oceans director at the Center for Biological Diversity, wrote that sudden swells, storms, and heavy fog common in the Arctic create an environment unsafe for drilling. That the Fennica didn’t make it to the Arctic safely initially creates concerns about its ability to safely support drilling.

Meanwhile, protesters continue to hang from the bridge in hammocks, equipped with plenty of food, water, and diapers, and are prepared to stay for several days. Portlanders even brought breakfast and coffee to them Thursday morning in support.

“This planet is why we’re here,” Flores said. “If we destroy it, we don’t have a place to inhabit. This is personal.”

When it comes to ransomware, you don't always get … END_OF_DOCUMENT_TOKEN_TO_BE_REPLACED

Peyton Carr is a financial advisor to founders, … END_OF_DOCUMENT_TOKEN_TO_BE_REPLACED