You are here: Home / World / Atlantic Drilling Would Offer $0 to States, Not $19 Billion 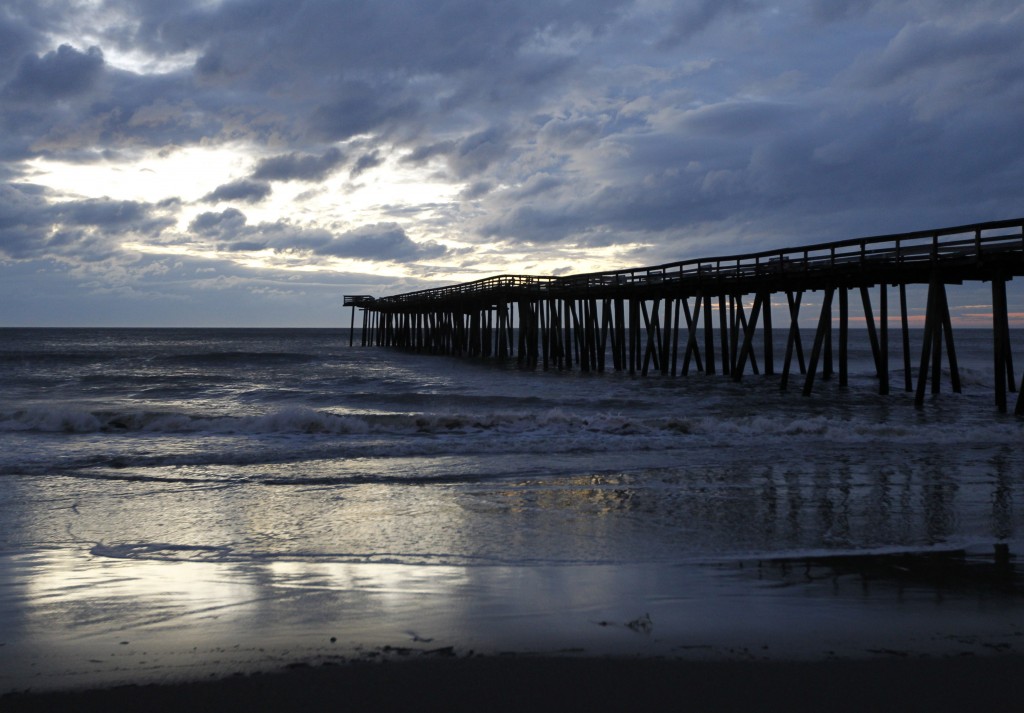 The sun rises over the Virginia Beach fishing pier. Fish — and fishing — would be at risk during seismic testing for oil, as well as during drilling.

The global community agreed last week that carbon emissions are destroying our environment. A massive oil spill five years devastated the Gulf of Mexico’s ecosystem. And yet, the Obama administration and several southern governors are talking about drilling for oil off the Atlantic coast.

But a new report from the Center for a Blue Economy suggests that the southern Atlantic states — Virgina, North Carolina, South Carolina, and Georgia — would see little to no benefit from offshore drilling, while putting a critical piece of their economies and lifestyles at risk.

The report, commissioned by the Southern Environmental Law Center (SELC), looked at a 2013 industry report commonly used to justify offshore drilling and found that it is based on outdated assumptions — including a price of oil roughly triple what it currently is.

The 2013 Quest Offshore report, prepared for the American Petroleum Institute and the National Ocean Industries Association, evaluated the economic benefit of opening the entire Atlantic coastline to offshore drilling (the administration’s five-year plan includes only the four states mentioned above and is restricted to 50 miles off the coast), assumed lease sales in 2018 (currently projected for 2021), set the price of oil at $120/barrel (oil is currently near an 11-year low of less than $40/barrel), and did not look at potential economic damage from oil activities.

What we have already is so crucial and so valuable to our southeastern states. It’s not worth the risk

“All these faulty assumptions result in over-estimations,” Chris Desherer, a managing attorney and head of the coast and wetlands program for SELC, told ThinkProgress. He points out that the analysis was done before the Bureau of Ocean Energy Management (BOEM) had released its five-year plan.

Sean Shafer, an author of the Quest report, told ThinkProgress the SELC was evaluating the report as though it was specifically looking at the administration’s plan, which it was not. “The way they are characterizing the report is the issue,” Shafer said. “We clearly stated our assumptions.”

But putting aside the area targeted and the timeline, the bigger issue with the Quest report, Desherer said, is that these states depend on ocean-based activities such as fishing and tourism.

“One thing Quest doesn’t do is that it doesn’t talk about what’s at stake,” Desherer said.

According to the Blue Economy report, in 2012 there were nearly a quarter million jobs related to the ocean in Virginia, North Carolina, South Carolina, and Georgia — and the “ocean economy” accounted for $14.6 billion in the region, including $7.5 billion worth of wages.

“What we have already is so crucial and so valuable to our southeastern states,” Desherer said. “It’s not worth the risk.”

Analyzing the economic benefits of the ocean was not in the Quest report’s purview, Shafer said.

But it appears that residents in these states agree the coast is too important to risk oil and gas operations. A grassroots campaign spearheaded by Oceana has seen more than 80 towns, cities, and counties pass resolutions against offshore drilling or seismic testing since January 2014.

In some ways, seismic testing is the more immediate concern for the anti-drilling (and pro-ocean economy) crowd. The administration is expected to begin permitting for seismic testing early next year.

During testing, boats bounce loud sounds off the ocean floor to identify potential underground deposits. The noises — approximately as loud as a jet engine, going on for days or weeks at a time, Desherer said — can be disruptive to marine mammals. BOEM estimated that nearly 40,000 marine animals could be injured, with another 13.6 million facing disruptions to migration and feeding patterns.

Those estimates might be low, and BOEM did not address issues surrounding fisheries, which some say could be hugely impacted.

That may be why a bipartisan group of 33 representatives recently asked BOEM to redo its environmental impact statement on the Atlantic Outer Continental Shelf, “based on the many studies that show harm to fisheries and marine mammals due to human-produced noice, including seismic airgun testing.” South Carolina Rep. Mark Sanford (R) and Virginia Rep. Bobby Scott (D) led the coalition.

But while local communities and congressional leaders may be on one side of this fight, the southern Atlantic governors are coming down squarely on the other. All four have offered support for offshore drilling — including South Carolina Gov. Nikki Haley, whose coastline now has 100 percent opposition to the process. Governors Pat McCrory (R-NC) and Terry McAuliffe (D-VA) even sent a letter last month to the Secretary of Commerce, who overseas BOEM, encouraging her to speed up the process of permitting seismic testing.

All four of the governors are members of the Outer Continental Shelf Governors Coalition, a group that works to expand offshore drilling. The group, which is housed in McCrory’s office, has been tied to oil industry lobbyists.

The governors aren’t listening to the people that elected them. It is a real problem

While that may not be surprising coming from McCrory, who has longstanding ties to fossil fuel industries, it is less in keeping with McAuliffe’s overall position. Upon election, McAuliffe reconvened his state’s climate change commission and has made Virginia’s coast a key element of his environmental platform.

“Opening up the Atlantic [Outer Continental Shelf] for energy development and expanding revenue sharing to all participating coastal states support our shared goal of providing our citizens with affordable and reliable energy resources,” the governors wrote in their letter to BOEM.

If they are looking at Quest’s analysis to support that position, the governors may want to think again. It’s incredibly unlikely that the federal government, including a Republican-led, fiscally conservative Congress, is going to implement revenue sharing with states. In fact, the Gulf states, which do have a revenue sharing policy, only got it in 2006, after seeing the damage from offshore drilling.

Under the Gulf of Mexico Energy Security Act, Alabama, Louisiana, Mississippi, and Texas will receive 37.5 percent of the federal government’s royalties and lease proceeds — starting in 2017. The policy is currently under attack in Congress.

No revenue sharing means that the economic analysis the governors are relying on might be misleading.

“What [the Atlantic governors] are going to end up doing is shooting their states’ economies in the foot,” Claire Douglass, Oceana’s campaign director for climate and energy, told ThinkProgress. “We have oil spill amnesia.”

The BP oil spill in 2010 took place just shy of 50 miles of the coast of Louisiana and cost the nearby states billions of dollars in economic and environmental damage.

Moreover, the huge outpouring of opposition to these projects should be a wake-up call to the governors in Virginia, the Carolinas, and Georgia. “The governors aren’t listening to the people that elected them. It is a real problem,” Douglass said.

Neither McAuliffe’s office nor the Virginia Department of Commerce responded Tuesday to ThinkProgress’ request for comment.

When it comes to ransomware, you don't always get … END_OF_DOCUMENT_TOKEN_TO_BE_REPLACED

Peyton Carr is a financial advisor to founders, … END_OF_DOCUMENT_TOKEN_TO_BE_REPLACED