You are here: Home / Sports / Because of 3 Interceptions, Raiders Lost Playoff Chances 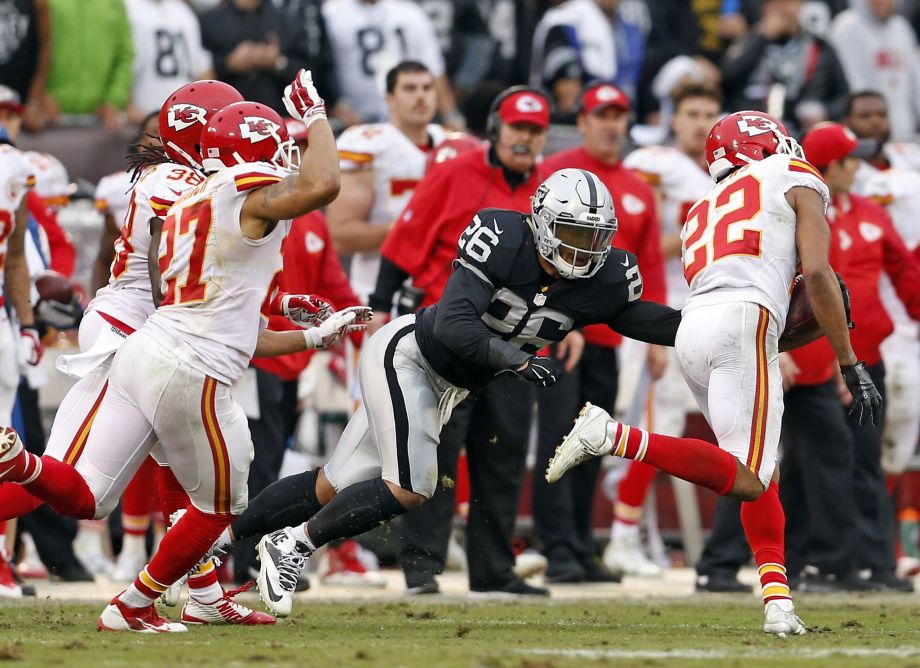 And then Derek Carr threw it away. Threw it right to the Kansas City Chiefs.

“You’re exactly right — this doesn’t help us,” Carr said. “We’ve got to win late in the season.”

Instead, the Raiders lost in a way that turns the narrative of a once-promising season on its head. Carr, one of the top young quarterbacks in the league, self-destructed in the fourth quarter Sunday. He threw three interceptions in the final 11:58 of the game. All three led to Kansas City touchdowns.

Raiders’ current chances at the postseason: slim and none.

It was a pretty soul-crushing loss.

“I’ve played a lot of football in my life — won a lot of games, lost a lot of games — but today was probably one of the hardest losses that I’ve been a part of in my career,” Charles Woodson said.

The Raiders fell to 5-7. They have slipped to the 10th seed in the AFC. They have four games remaining, three against playoff-caliber teams: the Broncos in Denver, the Packers at home and the Chiefs on the road.

It’s hard to argue with him. The Raiders were in good position against a surging Chiefs team (that has now won six in a row). Three times the Raiders took the lead, including on the opening drive, and they led 20-14 entering the final quarter.

And then Carr imploded.

“He had a rough fourth,” head coach Jack Del Rio said. “That was a tough way to finish.”

Carr is only 24. He’s still a youngster, but he’s been good enough for most of the season that we didn’t really expect him to be at the root of the Raiders’ downfall. But he had a terrible fourth quarter, just when the Raiders needed him to be at his best.

On the first interception, Carr was under pressure and a pass intended for Roy Helu was picked off by Chiefs linebacker Josh Mauga.

“I was in great position and the ball just fell into my hands,” Mauga said.

Mauga ran 66 yards to the Raiders’ 2-yard line before he was brought down, with the Chiefs coaches screaming, “Go! Go! Go!” from their seats in the press box. Two plays later, Alex Smith found Jeremy Maclin for a touchdown.

On the Raiders’ next possession, Carr was looking for Amari Cooper. But Cooper’s feet got tangled up and he fell, and Oakland native and first-round draft pick Marcus Peters intercepted the ball and returned it 58 yards to the Oakland 13. Two plays later, Smith again found Maclin for a touchdown.

On the Raiders’ next possession, Sebastian Janikowski missed a 49-yard field-goal attempt when the ball hit the left upright.

On the Raiders’ fourth possession of the quarter, Carr again was looking for Cooper, but his pass was intercepted by former Raider Tyvon Branch and returned 38 yards for a touchdown.

That’s what you call a bad day at the office.

When asked how his performance was, Carr said, “Not how I wanted. You can grade me. I don’t know.”

OK. He flunked the test. Harsh but true.

It happens. Even Tom Brady has a lousy game every now and then. Actually he had one Sunday, losing to the Eagles.

Carr’s error-prone game came against Mr. Never Intercepted. Smith has gone nine games and 305 passes without an interception and is now 53 shy of Tom Brady’s record of 358 passes without a pick, set in 2010 and 2011.

The ex-49er — who is playing well while his former team is in shambles — still gets denigrated for his style of play. But the efficient, controlled quarterback has the Chiefs rolling. Kansas City has recovered after a 1-5 start and is now firmly in the wild-card picture.

Instead, the Raiders’ first game in December was a disaster. And now the final month of the season for Del Rio’s team will be all too familiar. As meaningless as Dennis Allen’s and Art Shell’s and all the other recent Decembers in Raiders history.

“I didn’t do a good enough job for my team,” Carr said.

It’s hard to argue with him.

When it comes to ransomware, you don't always get … END_OF_DOCUMENT_TOKEN_TO_BE_REPLACED

Peyton Carr is a financial advisor to founders, … END_OF_DOCUMENT_TOKEN_TO_BE_REPLACED