You are here: Home / World / Boat Crash Causes 120,000 Gallons of Oil to Spill Into the Mississippi River 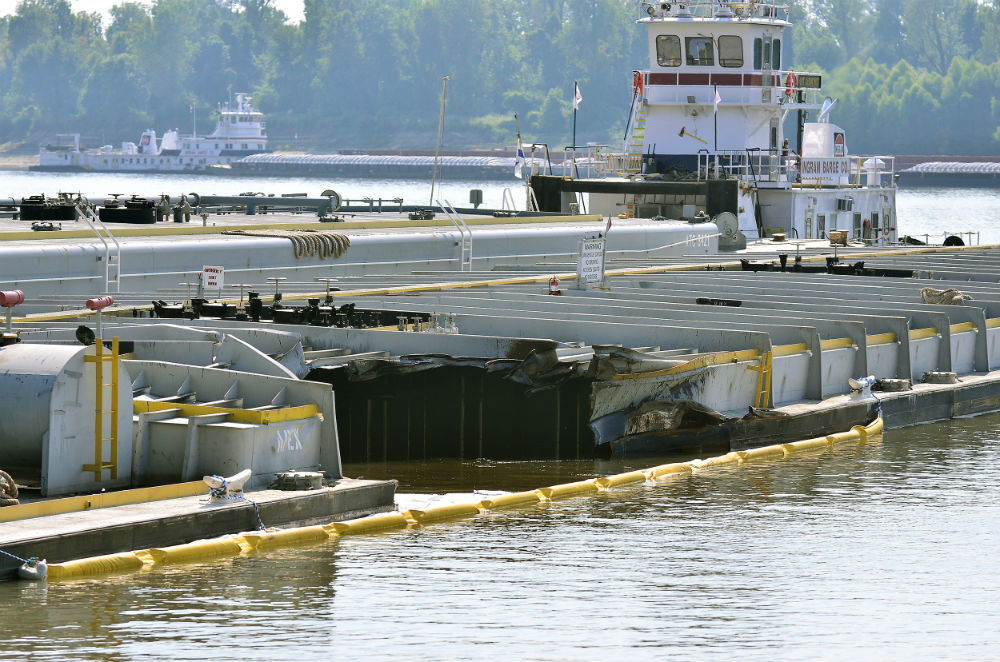 Damage on a barge is seen as it is moored along the Kentucky shore of the Mississippi River at Columbus-Belmont State Park in Columbus, Ky., Thursday, Sept. 3, 2015. A tow, seen in the background, traveling north on the river struck the barge as it was traveling south across the river. The Mississippi River has been closed to barge traffic because the damaged barge leaked clarified slurry oil.

More than 120,000 gallons of oil spilled into the Mississippi River Wednesday evening after two tow boats collided, causing damage to a barge.

The spill, which occurred near Columbus, Kentucky, prompted the Coast Guard to shut down the section of the Mississippi River from mile marker 938 to 922.

“We are working diligently to try to restore our marine transportation system,” Coast Guard spokesperson Lt. Takila Powell said. “We understand that it is vital.”

The substance that spilled into the river was “clarified slurry oil,” which is heavier than typical crude oil. To move the oil, Powell told the AP, it needs to be heated.

“How this type of product typically would react is that when it reaches the water that is of a lower temperature, it would solidify and sink,” she said Thursday. “But one of the things that we will be doing tomorrow is trying to determine where that oil has migrated to, to try to determine whether or not it has moved down the river or if it’s still in the vicinity of where the collision occurred.”

Some of the oil has been cleaned up from the site, and clean-up crews have put a boom around the barge to make sure no additional oil leaks into the river. Officials say that the spill won’t have an effect on water supplies, because wells provide the water in the region. So far, there haven’t been any reports of fish kills.

Oil spills have shut down portions of the Mississippi River before. Last February, about 31,500 gallons of oil spilled into the river after a barge carrying oil crashed into a tugboat. In 2013, a barge hit a railroad bridge in Mississippi and spilled light crude oil into the river, closing a 16-mile stretch of the waterway. And in 2008, a collision that broke a barge in half spilled 282,000 gallons of heavy oil into the river. That spill caused oil to coat the riverbanks, and was one of the worst New Orleans-area spills in recent history.

And, unfortunately, the Mississippi River is far from the only iconic U.S. waterway to be hit by spills. The Missouri, Ohio, and Yellowstone Rivers have all seen their share of oil and other contaminants, and just last month, millions of gallons of toxic mine water spilled into the Animas River in Colorado.

When it comes to ransomware, you don't always get … END_OF_DOCUMENT_TOKEN_TO_BE_REPLACED

Peyton Carr is a financial advisor to founders, … END_OF_DOCUMENT_TOKEN_TO_BE_REPLACED