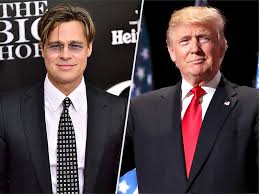 The American actor Brad Pitt talked to the writer Marlon James, for the Fashion section of the T Magazine, but their discussions weren’t focused on the male fashion, but on politics and on the republican candidate for the presidency of the USA, Donald Trump. According to the vanityfair.com, the most of the discussion of the two personalities was based on politics. About Brexit, Brad Pitt said that he had never thought that this will ever happen. He said that he also can’t think about Trump becomes a president of the USA. ‘In the simplest terms, what unites us is good and what divides us is bad’, says Pitt. A line from ‘The Big Short’ movie, which won the Oscar for the best adapted screenplay and which approaches the 2008 global financial crisis, helps us to understand what Pitt means: ‘When things go in a wrong direction, but you can find the cause, you only begin to make enemies’.

Pitt admitted he approached the supporters of Trump in the way in which he tries to understand a role that he would play, analyzing the reasons of the character, deeply searching inside it. Brad Pitt said that, coming from Oklahoma, the southern Missouri, which inclines more through Trump’s voice, he tries to understand. ‘It seems that people who suffer the most get to bet on the party that would hurt them again. So I try to understand where they come from’, said Pitt to James. Pitt also added that is a part of the DNA. The most of the Americans don’t have time to watch CNN or Fox because they are busy with paying their rent, feeding their children, they are tired when they get home and when the Trump’s voice suddenly appears saying that he got enough of it, this is the part that clings on the DNA.

When it comes to ransomware, you don't always get … END_OF_DOCUMENT_TOKEN_TO_BE_REPLACED

Peyton Carr is a financial advisor to founders, … END_OF_DOCUMENT_TOKEN_TO_BE_REPLACED