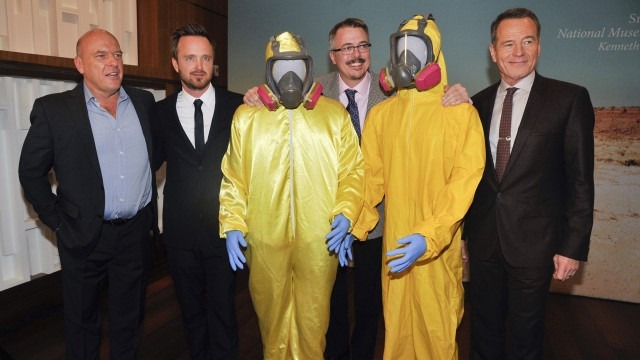 Now you can see crystal meth displayed at a major museum, courtesy of Breaking Bad. The TV series may be over, but Jesse Pinkman and Walter White will live on behind the walls of the Smithsonian’s National Museum of American History, now that the museum is adding ten artifacts from the show into its collection.

“If you had told me there’d be crystal meth in the same museum as The Star-Spangled Banner, Thomas Edison’s light bulb, Abraham Lincoln’s pocket watch and Dorothy’s ruby slippers, I’d have told you you were using too much of Walter White’s product,” USA Today reports Gilligan as saying.

“It gives me great pause to think I’m the man who brought crystal meth to the museum,” joked Dwight Bowers, the museum’s curator.

Amongst the other artifacts donated were hazmat suits and gas masks worn by Walt and Jesse, as well as Hank Schrader’s DEA ID card, a “Better Call Saul” matchbook and a purple corkscrew used by Marie Schrader, and the famous black “Heisenberg” hat — which Cranston put on during the ceremony.

“I wanted to see if it still fits. Thank you, everybody. Boy, it feels strange putting that back on.”

“I think the thing that really resonated was that Breaking Bad was a story of an average man who made decisions both good and bad, mostly bad,” Cranston told the Guardian.

“People related to the sense of going from paycheck to paycheck and having desperate needs at home and the plight of teachers, the burnout sensation facing apathetic students every day. A man lost and depressed –- it’s a very relatable thing -– and how he makes a decision that turns out to be the worst in his life.”

The Smithsonian’s growing TV collection includes props from Mad Men, The Wonder Years, Seinfeld and All in the Family. Just don’t expect to see its new additions just yet: The Breaking Bad props aren’t expected to be on display until 2018, when a new culture gallery will open

When it comes to ransomware, you don't always get … END_OF_DOCUMENT_TOKEN_TO_BE_REPLACED

Peyton Carr is a financial advisor to founders, … END_OF_DOCUMENT_TOKEN_TO_BE_REPLACED