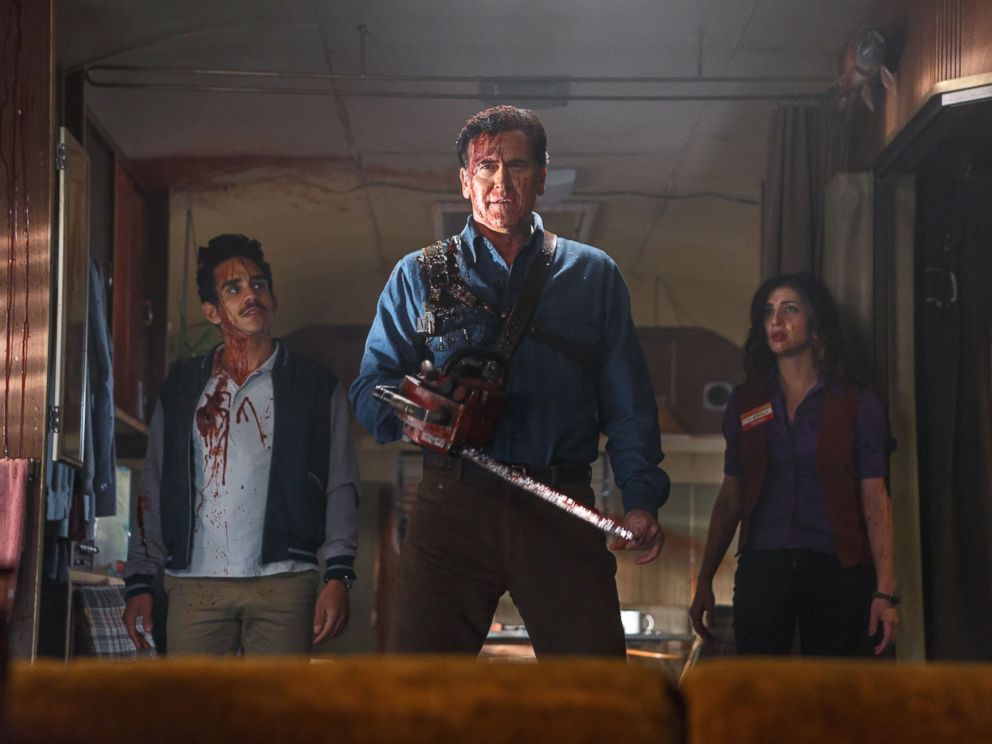 In 1981, a little-known actor named Bruce Campbell took the lead role in a small horror film called Evil Dead. Campbell teamed up with young director Sam Raimi to piece together a timeless classic that took home more than $2.4 million at the box office from a budget of almost nothing.

“We didn’t even know what a budget was,” Campbell told ABC News about that time more than 30 years ago.

Indeed, Campbell said he would help out the crew in between shooting, fixing lights, doing whatever they needed him to do at the time. How times have changed.

Fast-forward past Evil Dead 2 (1987) and Army of Darkness (1992), and Campbell has built a cult following most actors only dream of. But it has been 23 years since we last saw Campbell’s Ash headline a project.

Campbell, now 57, is back in Ash vs. Evil Dead and he says this show is a completely different animal.

Campbell joked about how playing Ash is a little more “difficult” now, especially holding weapons like shotguns and chainsaws. Campbell is no gym rat.

“I spend a lot of time in the pool,” he said, adding that stretching is extremely important to get back to fighting the Evil Dead. “I do geriatric stuff.”

All jokes aside, Campbell said the new show, which fans have been wanting for decades now, is his character and his franchise coming full circle.

“Evil Dead was the first of anything for us. Our first movie, our first getting into the business,” he said. “There’s always going to be an affection for the movies and the characters from all of us; me, Sam Raimi and [producer] Rob Tapert … getting back to it now, besides the physical limits we all have now, is very exciting.”

How has Ash changed? In the very first scene, you see a much more confident hero than before. Campbell says fans shouldn’t be surprised.

“Ash has always sort of been amping up over the movies,” he added. “If you’ve met someone who’s extremely confident … they are [one click away] from being completely unconfident.”

Campbell isn’t the only cult icon in the show. Lucy Lawless of Xena: Warrior Princess fame joins her producer-husband, Tapert, to bring a strong female character into the mix.

Ash vs. Evil Dead has a slew of women who can kick butt just like the men.

“I don’t think there’s ever been anything quite like this before,” she told ABC News. “It’s kind of the family business.”

As for the budget and a network like Starz backing the show, Campbell simply says things are different 34 years later because “we’re getting paid now.”

“We’re just glad that people want to see it,” Campbell added. “They’ve been tormenting us for years.”

When it comes to ransomware, you don't always get … END_OF_DOCUMENT_TOKEN_TO_BE_REPLACED

Peyton Carr is a financial advisor to founders, … END_OF_DOCUMENT_TOKEN_TO_BE_REPLACED