You are here: Home / Business / Bruce Springsteen saved by a group of bikers after having problems with his motorcycle 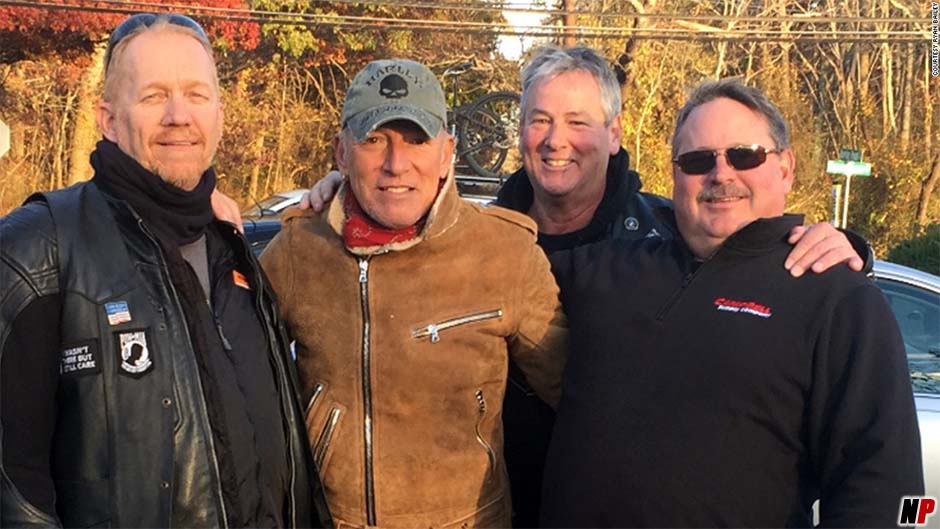 The American singer Bruce Springsteen was saved, Friday, by a club of bikers after his motorcycle broke down on a road in the vicinity of Freehold, New Jersey. Dan Barkalow didn’t hesitate when he saw a motorcyclist with problems, on the side of the road. He pulled over and noticed that the motorcyclist seemed familiar to him and he realized that this was no other than Bruce Springsteen. ‘It is a day that I will probably not forget too soon’, said Barkalow.

‘I just pulled over and got off the bike and said, ‘Hey, I think I know you,’ said the 54 years man. He was impressed that Springsteen is ‘real down to earth’. The bikers group, Freehold American Legion Riders, led by Barkalow, was returning from the Veterans Day ceremony, in Holmdel, New Jersey. The rocker, originating in Freehold and who lives in the vicinity of the place where he had the problem, was sitting in that place for 45 minutes after the battery of his motorcycle was no longer charging.

The bikers immediately helped Springsteen and transported him to a restaurant in the vicinity. The star, who recently published the volume of memoirs ‘Born to run’, stood treat to his new friends and he talked to them about motorcycles and about ‘the good and old Freehold’, according to Barkalow. The biker Ryan Bailey added that Springsteen noted the name of the group and the phone numbers of those who helped him with his motorcycle problem. ‘He said: ‘If I will come around the area, I will offer you tickets to the concert’. It was quite beautiful’, said Bailey, who also mentioned that the politics was not among the discussed subjects, despite the fact that the artist declared his support for the candidate to the presidential election, Hillary Clinton.

When it comes to ransomware, you don't always get … END_OF_DOCUMENT_TOKEN_TO_BE_REPLACED

Peyton Carr is a financial advisor to founders, … END_OF_DOCUMENT_TOKEN_TO_BE_REPLACED