You are here: Home / World / Why Buy an Apartment When You Can Buy a Town for Same Price? 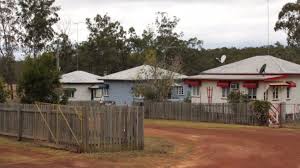 Can’t afford a house or apartment? Why not buy a town? As Australia’s younger generation wonder how on earth they’re supposed to “get a good job that pays good money” to purchase their first home in the country’s capital cities, perhaps the easiest solution is well, to buy an entire town.

Yes, the whole town of Allie’s Creek in Monogorilby is up for sale. It is located in the south-east corner Queensland, around five hours drive from Brisbane.

The town consists of 16 Queenslander-style homes — which have wrap around balconies, stumps for ventilation and weatherboard cladding — but there are also roads, street lights, a water purification plant, power depot, a dam with a pontoon, plus a phone line to each home.

The cost? You can buy the lot for the relatively affordable sum of A$750,000 (US$547,612). That amount would barely get you a two-bedroom apartment in the inner suburbs of Sydney, or a newer home in Melbourne’s inner suburbs.

The town is actually a decommissioned saw mill, complete with sheds and all the machinery to make it happen. A perfect spot to reenact your own version of Twin Peaks, or to start becoming a lumberjack.

Formerly owned by a husband and wife who bought the town in 2008, it was put on the market for $2.1 million in September but has just been slashed to the bargain price due to the death of the husband.

Around half of the homes are currently occupied by tenants, but Sutton said the town is a perfect spot for a music festival, a caravan site or a retreat. “It’s only been used as a place for rental income so far, but it’s a complete small town with all the roads made, including a hall for functions … there’s just so much that’s possible,” she said.

So far, Sutton has received around a dozen serious expressions of interest from individual buyers and consortiums, which isn’t a surprise given the bargain basement cost of an entire town.

So if you want to run in the streets of a town you actually own, you’d better hurry.

UPDATE: Friday May 13, 2:07 p.m. AEST The original story stated Monogorilby was for sale, when it is in fact Allie’s Creek, a part of Monogorilby that is for sale.

When it comes to ransomware, you don't always get … END_OF_DOCUMENT_TOKEN_TO_BE_REPLACED

Peyton Carr is a financial advisor to founders, … END_OF_DOCUMENT_TOKEN_TO_BE_REPLACED