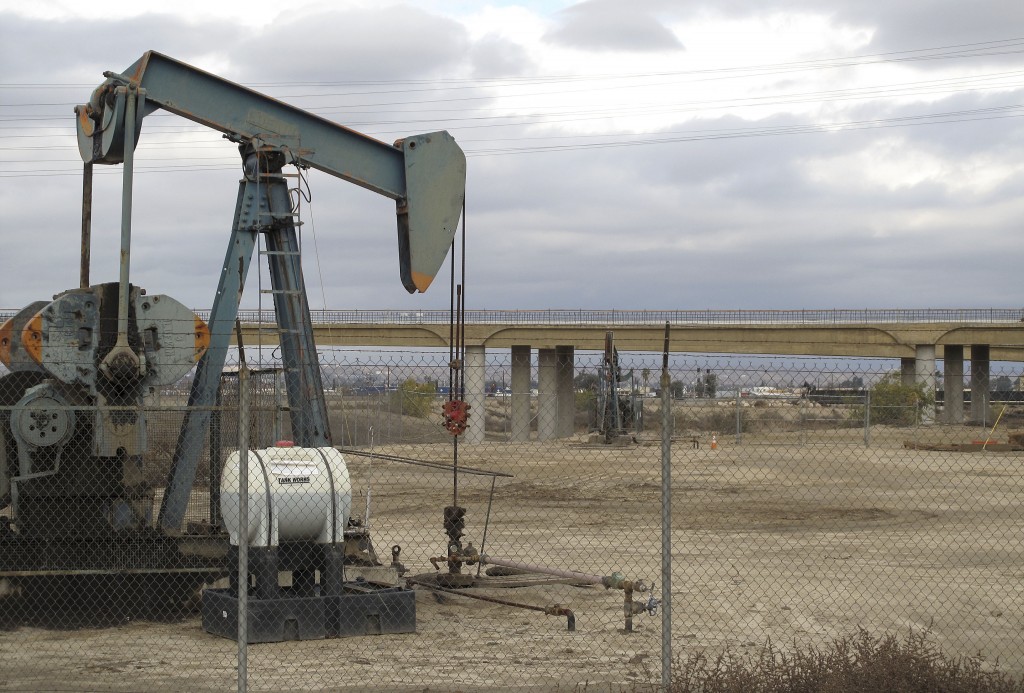 In this Dec. 18, 2012 photo, one of the region’s thousands of oil pumps sits in the foreground of the new Westside Parkway under construction in Bakersfield, Calif. Much of the economic boom Bakersfield is enjoying is because high oil prices and new technology for extraction have revived the $10 billion industry that seemed dried up 25 years ago when Kern County set out to diversify its economy and expand its tax base.

Kern County, California, where 95 percent of the state’s fracking takes place, is getting sued over a recent decision that did away with public notice and environmental review for oil and gas permits for the next 20 years.

A coalition of environmental and social justice groups filed the complaint Thursday, saying that the new zoning ordinance, which went into effect this week, is inconsistent with California’s environmental review laws.

“Proposed and paid for by the oil industry, the [new regulations] purport to authorize the development of up to 3,647 new oil and gas wells and extensive associated construction and operational activities, each year for 20 to 25 or more years, without any further, site-specific assessment of those activities’ health and other environmental impacts,” the complaint says. “The ordinance jeopardizes the health and well-being of hundreds of thousands of people across Kern County.”

Three oil industry groups spent more than $10 million on developing the ordinance. “We’re exceptionally pleased with not only the county staff’s effort that they put into the development of this project, but now, as well, the board’s unanimous approval,” Suzanne Noble, vice president of production regions for the Western States Petroleum Association, told the Bakersfield Californian last month.

Stacey Geis, a managing attorney for Earthjustice, which filed the complaint on behalf of the Sierra Club and the Natural Resources Defense Council (NRDC), said the ordinance will bring huge benefits to the industry.

“Think of all it will save them! No environmental review for at least 20 years,” she told ThinkProgress. Impacts that will no longer be reviewed include traffic, infrastructure, water use, and air quality, Geis said.

“It’s truly amazing, especially when we have laws — and we have good laws in California — that say you don’t get to put up a project that has potentially significant impacts without properly studying it,” she said.

Kern County is disproportionately low-income and non-white compared to other parts of the state. According to a report from NRDC last year, some 5.4 million Californians live within a mile of an oil or gas well, and the large majority of them are people of color. In Kern County, nearly half the people living within a mile of a well are in a high-pollution community. Nearly 75 percent of that high-impact group are people of color.

“With this ordinance, Kern County is actively helping oil companies pollute our air and water and put vulnerable communities at risk for decades,” said Hollin Kretzmann, a staff attorney for the Center for Biological Diversity. “County officials have reached a new low in claiming they can eliminate environmental review for all future oil and gas activity.”

When it comes to ransomware, you don't always get … END_OF_DOCUMENT_TOKEN_TO_BE_REPLACED

Peyton Carr is a financial advisor to founders, … END_OF_DOCUMENT_TOKEN_TO_BE_REPLACED