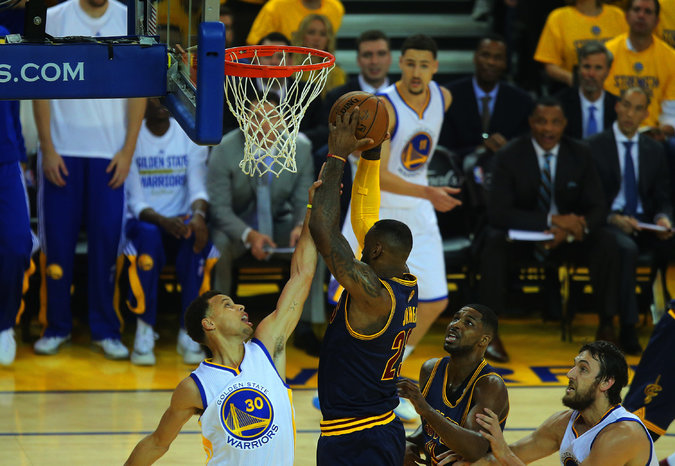 OAKLAND, Calif. - For better or worse, Matthew Dellavedova has a knack for making himself the story. Stepping into Clevelandâs starting lineup for the injured All-Star Kyrie Irving on Sunday night, Dellavedova hit two free throws with 10.1 seconds left in overtime.

He then harassed Stephen Curry into an air-ball jumper as the Cavaliers survived a furious rally by the Golden State Warriors for a 95-93 victory that evened the N.B.A. finals at one game apiece heading back to Cleveland on Tuesday night.

After eight full quarters and two overtimes, neither team has been able to achieve any meaningful separation, and LeBron James said the Cavaliers’ effort was a demonstration that they would not soon disappear.

Led by James’s triple-double of 39 points (albeit on 11-for-34 shooting from the field), 16 rebounds and 11 assists, the Cavaliers built an 11-point lead with 3 minutes 14 seconds left in the fourth quarter. But the Warriors - who had misfired on 3-point attempts all night, with Curry the worst culprit (2 for 15) - stormed back to send a second straight game to overtime on Curry’s driving scoop.

In overtime, the Warriors rallied from an early 5-point deficit and took a 93-92 lead when Curry hit two free throws with 29 seconds left. Then James found an open James Jones for a 3-point attempt from the right corner that missed.

Dellavedova, at 6 feet 4 inches, wedged into the lane among much bigger players, got his hands on the ball and was fouled trying to tap it in.

He made both free throws and then, as he had done all night, aggressively defended Curry, who missed a left-side jumper from about 19 feet. James got the rebound, was fouled and missed one of two free throws.

But with the Warriors out of timeouts, Curry’s rushed pass upcourt went awry, James let out a triumphant howl, and a series that had been supposed to tilt toward a Golden State blowout after Irving fractured his left kneecap in overtime of Game 1 looked more like a tossup.

Klay Thompson led Golden State with 34 points, but the usually high-scoring Warriors made only 8 of 35 3-point shots - many of them rushed from deep against a gritty Cleveland defense that was personified by Dellavedova.

Curry, the league’s most valuable player this season, said his shot “didn’t feel right” from the beginning and offered limited praise for Dellavedova, his unheralded opponent.

“He played hard and stuck to their game plan,” Curry said, adding: “I’m not going to let one game alter my confidence. I doubt this will happen again.”

“It had everything to do with Delly,” James said. “He just kept a body on Steph. He made Steph work. He was spectacular, man, defensively.”

Forcing the Warriors into a tough, inelegant game more suited to the Eastern Conference, the Cavaliers did an excellent job trapping Curry and Thompson off the high screen. And Dellavedova bothered Curry by doggedly chasing him, not allowing Curry to free himself off the ball.

“He’s a courageous kid that plays right,” Cavaliers Coach David Blatt said of Dellavedova. “There was a lot of nonsense swirling around about his style of play. I think anyone that looks at him objectively and fairly recognizes someone that just plays hard, heartfelt and tough basketball.”

Dellavedova, a second-year pro from Australia who played college basketball at nearby St. Mary’s, had already had a memorable and turbulent postseason.

With his playing time increased while Irving was struggling with knee tendinitis and a foot sprain, Dellavedova gave Cleveland a lift with long-range shooting and all-around hustle. But what was inspiring for the Cavaliers was infuriating for opponents.

After entanglements with Dellavedova led to the ejections of Chicago’s Taj Gibson in the second round and Atlanta’s Al Horford in the Eastern Conference finals, Dellavedova had all of Cleveland, James included, insisting he was merely scrappy, not dirty.

But Irving - who was also born in Australia, while his father, Drederick, was playing pro basketball there – acknowledged that he and Dellavedova had had their share of practice tussles over the past two seasons.

Andrew Bogut, the Warriors’ center and another Australian, said before Game 2 that Dellavedova could provide the energy and emotional lift the Cavaliers needed after the deflating news on Irving - and that he might be better at chasing Curry given the condition of Irving, who has never been considered a stout defender.

“He’s a big-game player,” Bogut said of Dellavedova. “Big shots in college, big shots for the national team. He’s always doubted – and that’s what he thrives on.”

The downside for the Cavaliers – and no small concern for them – was how they would compensate for Irving’s ability to create off the dribble and, at the same time, ease some of the pressure on James to manufacture scoring opportunities for himself and his teammates.

But James dominated their offense on Sunday night. Having drawn criticism for launching a long jumper with a victory in his grasp at the end of regulation in Game 1, he attacked the paint. With the Warriors forced to converge around him, James found open shooters on the perimeter and helped center Timofey Mozgov to a 17-point night until Blatt matched the Warriors’ small lineup by sending Mozgov to the bench.

In Europe and Israel, Blatt was known for his defensive schemes, and in Game 2, the Cavaliers never let the Warriors find a rhythm. Maybe it was a coincidence, Curry being due for an off night, or the fact that Dellavedova was annoying him. But the results were clear, and if not for Thompson, Curry’s Splash Brothers partner, Golden State would have been blown out.

For much of the night, James did not get much help except from Mozgov. But J. R. Smith and Dellavedova made big 3-point shots as the Cavaliers built their lead late in regulation, and in overtime, Dellavedova scored the 2 biggest points of all, those two free throws, after his offensive rebound.

“I mean, that’s the classic thing you practice as a kid growing up,” he said. “Down 1, you need to make both free throws.”

Then he needed to stop Curry one more time.

“I think it’s just a team defensive cover,” Dellavedova said, playing down the one-on-one angle. “Everybody has to be alert the whole game because if you lose him for a second, he’s going to get a good look.”

The only things Curry and the Warriors were looking at late Sunday night were a long trip east and a much longer series than many had thought would be necessary.

When it comes to ransomware, you don't always get … END_OF_DOCUMENT_TOKEN_TO_BE_REPLACED

Peyton Carr is a financial advisor to founders, … END_OF_DOCUMENT_TOKEN_TO_BE_REPLACED