You are here: Home / Featured / Charles Richter, the initiator of the Richter magnitude scale, became a seismologist from an ‘error’ 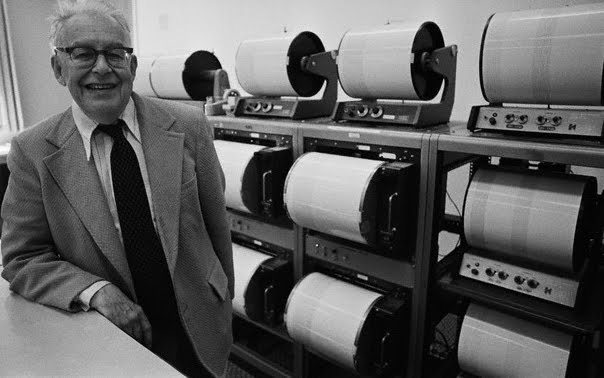 On September 30, 1985, the initiator of the famous magnitude scale Richter, passed away. Charles Francis Richter spent the most of his life in California, in a vulnerable area from the seismic point of view and he made studies in this domain at the Stanford University, being familiarized with the researches of the Pasadena seismology Laboratory. In one of the rare given interviews, Richter confessed that he became interested by seismology from a ‘happy error’. He said that while he was working for this doctorate about the theoretical physics, the doctor Robert Milikan called him in his office and told him that the seismology laboratory is was looking for a physician. Although Richter was not in the domain, he found the offer interesting and he gave up on his activity to join the seismologists team in 1927. The Richter scale was created in 1935, by Charles Richter and Beno Gutenberg, from the California Institute of Technology and indicates the energy released in the center of an earthquake.

It is a logarithmic scale, because the magnitude, after Richter, corresponds to the logarithm of the volume waves amplitude measurement, at 100 kilometers away from the epicenter and is gradated from 1 to 9 and the intensity of the earthquakes are expressed in fractional numbers. In 1956, Richter and Gutenberg, a German seismologist and a geologist from the California Technology Institute, on the base of a precise map of the earthquakes re-partition in the area, improved the method of magnitude measurement, taking into the consideration the volume waves too, whose propagation speed depends on the terrestrial structure, these being observed on a 20 seconds duration. Richter suggested the measurement of the earthquake magnitude based on the maxim amplitude of the seismic waves, recorded on the seismographs. The Richter scale is a logarithmic one, a modify with one grade being correlated with a 10 times modify of the seismic wave amplitude.

When it comes to ransomware, you don't always get … END_OF_DOCUMENT_TOKEN_TO_BE_REPLACED

Peyton Carr is a financial advisor to founders, … END_OF_DOCUMENT_TOKEN_TO_BE_REPLACED