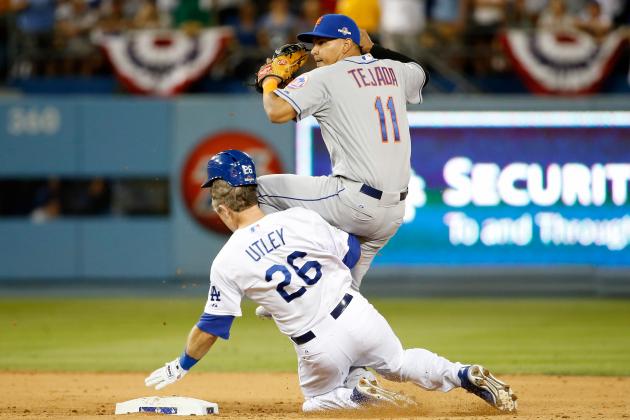 The New York Mets can’t get their Game 2 loss to the Los Angeles Dodgers in the National League Division Series back, but they can at least take solace in the fact that Major League Baseball considers Chase Utley’s slide into second base during Game 2 worthy of a suspension.

MLB Communications announced Sunday that Utley will be suspended for Games 3 and 4 of the series for his slide in the seventh inning of Saturday’s contest. Here is the full statement:

LAD INF Utley has been suspended for Games 3 & 4 of NLDS as a result of his illegal slide in the 7th inning on Sat. pic.twitter.com/ktAjmXWFaR

The Dodgers said they “stand behind Chase Utley and his decision to appeal the suspension. No further comment at this time,” per Anthony DiComo of MLB.com.

However, Ken Rosenthal of Fox Sports noted Utley will appeal the suspension, adding the infielder will “cite a number of similar slides that did not result in discipline.” On Monday morning, CBS Sports’ Jon Heyman reported, “MLB wants Utley hearing today (before Game 3). Union wants time to prepare. CBA mandates appeals be within 14 days.”

New York held a 2-1 lead in the seventh inning, but Los Angeles had runners on the corners with one out. Howie Kendrick hit a ground ball, and Utley slid outside and well past second base to break up a potential double play. He slammed into Tejada in the process and was eventually called safe after a replay review because the Mets shortstop never touched the bag.

Jayson Stark of ESPN.com pointed out how strange it was that Utley was ruled safe:

A stunner from MLB. Chase Utley suspended for next 2 games. Even more bizarre now that he was called safe https://t.co/fgxb7TKyBG

After the ruling, Adrian Gonzalez and Justin Turner drove in runs with doubles, and the Dodgers proceeded to even the series at a game apiece.

Joel Sherman of the New York Post said Los Angeles will play with 24 players if the suspension is upheld. Sherman added, “MLB will do everything to expedite matters and try to have a hearing tomorrow in time for Game 3.”

Utley’s agent Joel Wolfe released the following statement regarding the suspension, via Rosenthal:

A two-game suspension for a legal baseball play is outrageous and completely unacceptable. Chase did what all players are taught to do in this situation—break up the double play. We routinely see plays at second base similar to this one that have not resulted in suspensions. Chase feels terrible about Ruben Tejada’s injury, and everyone who knows him knows that he would never intentionally hurt anybody. We will be appealing this suspension immediately.

ESPN Stats & Info highlighted why the result of the appeal will be critical in the series:

Mets fans were understandably upset in the immediate aftermath of the play that broke Tejada’s leg and cost their team a chance to go up 2-0 in the series. Gary Parrish of CBS Sports echoed that sentiment:

(Now maybe some of you idiots will stop pretending he was just playing the game the right way and hard.)

Utley commented on the play after the game, per the Associated Press (via ESPN.com): “I feel terrible that he was injured. I had no intent to hurt him whatsoever. Any time there’s a double play you should do your best to break it up.”

Utley said he wasn’t trying to hurt anyone, but Mets third baseman David Wright was not pleased with what happened, per the Associated Press (via ESPN.com):

Only Chase knows going in there what the intent was. I have a problem with the play on a number of different levels, one being the slide itself. In my opinion, he wasn‘t anywhere close to the bag. With that being said, he never touched the bag. And I think the ‘neighborhood play’ is there to protect players. … It definitely seemed like after that play we lost the momentum and they came up with some big hits.

The Associated Press piece noted there is a history between the two players. In 2010, when Utley was a member of the Philadelphia Phillies, the Mets were upset when Utley went in with a hard takeout slide on Tejada.

It may be a minor consolation for the Mets, given how costly Saturday’s slide proved to be, but at least they won’t have to worry about Utley again if the suspension is upheld, unless the series goes the full five games.

When it comes to ransomware, you don't always get … END_OF_DOCUMENT_TOKEN_TO_BE_REPLACED

Peyton Carr is a financial advisor to founders, … END_OF_DOCUMENT_TOKEN_TO_BE_REPLACED