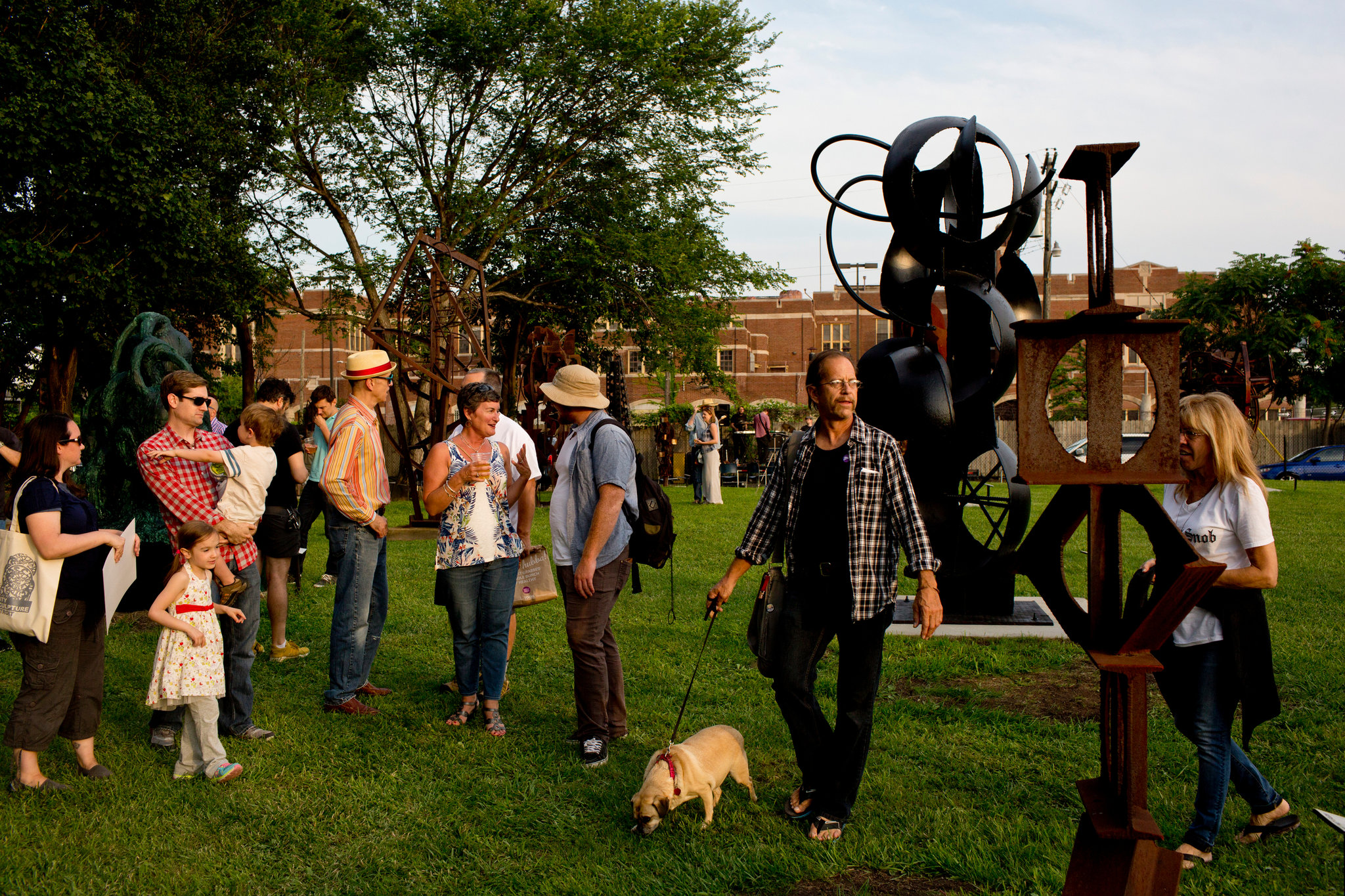 Detroit does not compute, at least at first. Long-known associations (auto industry, Motown, cherished sports franchises) give way to first impressions: vast stretches of empty lots, surreal semi-ruins, traffic so shockingly light that streets of the Motor City might as well be one big bike lane.

But upon exploration, signs of the recent Detroit revival emerge — artists snapping up foreclosed homes, a thriving culinary scene, major housing developments, the oft-praised RiverWalk with views across to Windsor, Ontario (to the south, just to throw the brain an added twist). And more than anything, energetic mini-neighborhoods vibrant with commercial, creative and civic activity. It’s not just the houses that are inexpensive but, with some exceptions, the city as a whole. I was impressed, and sometimes shocked ($3 local IPAs!) by the low cost of a visit — if you avoid the fancier new spots serving $4.50 coffees, that is.

That revival, and its budget-friendly status, have made Detroit an attraction for more than just domestic tourists.

“Everyone in Berlin wants to visit Detroit,” said Leen, an Englishwoman who lives in Berlin whom I met on the RiverWalk, during one of several free tours given by Detroit Experience Factory. (They are a good introduction to the city.) She noted that Detroit was the birthplace of techno, and Berlin was where it grew up. There’s another parallel, of course: A few decades ago parts of Berlin, too, emptied out, and the vacuum was filled with a brand of young people not entirely unlike those coming into Detroit today.

Leen was visiting for a week; I was there for just a Sunday and Monday in mid-September. They were poorly chosen days, at that — if I had come a day earlier, I could have experienced Dally in the Alley, a decades-old, music-filled street festival in the Cass Corridor area; I also missed the huge Saturday produce market in the Eastern Market district that attracts tens of thousands.

Arriving via rental car (your choices are rental car or rental bike, since the bus system isn’t quite up to the task) straight off a cheap Spirit Airlines flight, I set myself up at Hostel Detroit — a funky place in a semi-abandoned, semi-cool grassy-urban part of the Corktown neighborhood, where a private room with shared common space and bathroom was $58 a night — and then headed down to Michigan Avenue, looking for a bar to watch the Lions game.
For a main drag in a football town on a Sunday, the bars were listless. But signs along the road pointed to a “Maltese Festa,” at what turned out to be the open-to-the-public bar at the Maltese-American Benevolent Society. (Apparently, the automobile industry was a magnet for immigrants from the tiny Mediterranean island nation after World War I.) The “festa” was to celebrate independence “from the Turks or something” according to a table of older women I befriended before staying for a $3 beer.

The most memorable parts of my trip were these sorts of personal interactions. (I had already had a fun exchange at the Sunday Street Market at Eastern Market with a woman trying — and failing — to sell me a notably gaudy toilet brush.) On Monday, after some 80-cent doughnuts at Donut Villa in Mexicantown, I stopped by the Heidelberg Project, a celebrated outdoor art installation. Along several blocks of a partly abandoned stretch of the East Side, the artist Tyree Guyton’s playful and startling junk art has attracted visitors since 1986 (though it has been controversial — it was twice partially demolished by the city government and has at times stirred some resentment in the community — and was recently damaged by suspicious fires). I smiled at the house covered in colorful polka dots, peered into the cross-covered Checker Cab to see a decrepit, life-size plastic Santa Claus figure inside, circled the wooden skeleton of a house with vinyl records hanging from just about every vertical beam. But the dominant motif: clocks, clocks, clocks.

On my way out, I passed an older African-American man placing fliers on the information booth, and asked if he worked for the Heidelberg Project.

“I am Heidelberg,” he said somberly. It was Mr. Guyton himself.

“I read that your clocks represent the passage of time,” I said.

“Let me ask you, are you happy with your life?” he said. No weaseling out of this one.

“I guess there are some things I would change,” I replied.

“Look for patterns in the past that I can break in the future?”

He gestured to the project around him and said: “That’s why I did this.”

Mind … O.K., not quite blown, but at least tingling.

Unlike Corktown, originally settled by Irish from County Cork, Mexicantown is still true to its name. And so that afternoon, after the RiverWalk tour, I invited Leen to tag along for tacos. A friend of a friend had recommended Tacos El Rodeo, a truck that operates in a lot at 25th Street and Vernor Highway. Leen is vegetarian, so she ordered a tasty looking $2.50 vegetable tostada, and loaded it with onion, pineapple and habanero pico de gallo-style salsa. I could tell from her reaction that those habaneros stung.

But that turned out to be nothing compared with my experience with a taco de birria, or stewed beef ($1.75). It was not the habaneros that did it — rather, the live bee that had wandered inside as I was distracted downing my other order, a taco al pastor. When the winged freeloader found itself trapped amid my gnashing teeth, it did as I would have done if I were it, and stung me on the lip and tongue. (Yes, bees can sting twice. I looked it up.) The friendly workers in the truck provided some ice, with which I numbed the pain and then finished the rest of the taco.

Leen and I went to explore another one of the reinvented neighborhoods we had heard about, Cass Corridor. We chatted with gardening locals, visited a sculpture garden put up by Robert Sestok, an artist who has lived in the neighborhood since 1967, and admired El Moore, a gorgeous 1898 building recently reopened as sustainable, community-oriented apartment building; it will soon house a hostel.

We also met Devin Gregory, a Detroit native (unlike most of the people we met in the neighborhood, who were mostly out-of-towners). The 24-year-old, currently working as a dishwasher, was generally positive about the emerging Detroit — but with a caveat. “We had an old, beat-up city and its being fixed, that’s great,” he said. “But there’s a bad side: Who likes having newcomers come into your special clubhouse?”

We kept walking, and stopped short at a firehouse, where a shiny 1937 vehicle gleamed in the driveway. The two men standing by it explained that it was a hearse for fallen firefighters; they were waiting for traffic to abate so they could drive to Lansing, where it would be used in the funeral of Dennis Rodeman, the firefighter who was run down on the street while collecting for charity.

We headed into Slows to Go, an outpost of the new-Detroit mainstay Slow’s Barbecue. I offered to split the most appealing vegetarian items: the Kung Fu, a humongous $8.95 sandwich of blackened tofu, black bean purée and jalapeños; and a $2.95 “small” side of creamy macaroni and cheese (which turned out to not be small at all), draped in a layer of sharp Cheddar. Leen had never tried macaroni and cheese (uncouth foreigner!) and got a great first version.

While there, we broke out a laptop and looked for evening activities; we found several cool-sounding organizations she had heard of — Detroit SOUP, which funds neighborhood projects through monthly soup and salad fund-raisers; Trinosophes, a music and art space with cafe; Trumbullplex, a self-described “Anarchist housing collective” with frequent music events and a ‘zine library — but nothing for that night.

So instead, we settled for happy hour downtown at the Grand Trunk Pub, which long ago served as the railroad ticket office. Alas, we were too late for discount beers, but had one $5.50 pint each. Both were local, of course, including a deliciously crisp and hoppy Two Hearted IPA brewed in Kalamazoo. From there, we wandered into the Guardian Building, an Art Deco marvel from the late ’20s where the night security guards seemed happy to have some company, and gawked at the wildly colorful vaulted ceiling covered in Native American-inspired tile mosaic.

As the night wound down, I found out that Leen had frugally one-upped me; she was Couchsurfing, so I dropped her off at her free digs and headed for my hostel. She also had another few days in town, and an agenda packed with events I would miss.

“It’s actually a little bit mean,” she said. “There are way too many things to do.”

When it comes to ransomware, you don't always get … END_OF_DOCUMENT_TOKEN_TO_BE_REPLACED

Peyton Carr is a financial advisor to founders, … END_OF_DOCUMENT_TOKEN_TO_BE_REPLACED