You are here: Home / World / China Ends Recovery Efforts on Ship That Capsized on Yangtze 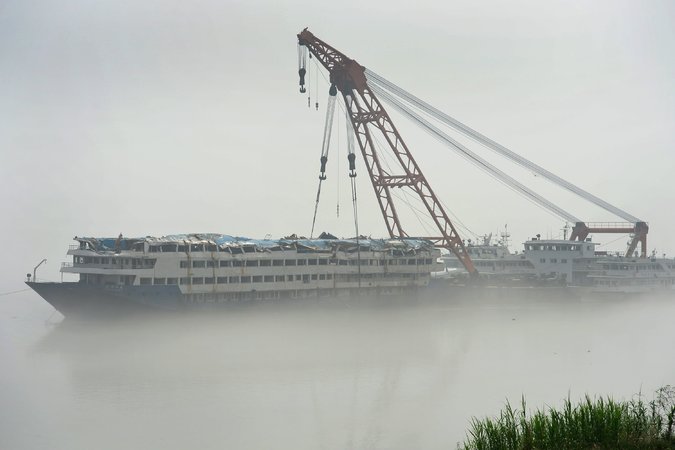 BEIJING - China has concluded rescue and recovery efforts surrounding a cruise ship that capsized this month on the Yangtze River and has revised its count of the number of people who were on board and the number of survivors, according to official news media.

The government proclaimed an end to the operation over the weekend, almost two weeks after the ship overturned amid rain and high winds. Officials said on Saturday, the last day of the efforts, that the ship, known as the Oriental Star or Eastern Star, had 454 people on board at the time of the accident on June 1, not 456 or 458, as officials had said soon afterward.

The death count remains the same: The police have identified 442 bodies by using DNA samples and have turned the bodies over to relatives, according to Xinhua, the state-run news agency.

At a news conference on Saturday in Jianli, the town in Hubei Province in central China near where the ship capsized, an official, Tang Guanjun, said the number of survivors was actually 12, not 14, as officials had said earlier. He said there had been a miscount of survivors because two people had been recorded separately by different “government organs,” Xinhua reported. He did not give details about the agencies involved in the mistake.

Mr. Tang also explained why the official count of the people on board the ship was 458 on June 2. At the time, that number was broken down as 406 tourists, 47 crew members and five tour guides, he said, based on a list provided by the company that owned the ship.

But further investigation led officials to conclude that one crew member had left at a previous stop and that a tourism agency had, on paper, mistakenly added five tourists to the passenger list; those five were actually on another tour. The agency had also failed to properly record two new tourists who had joined the Oriental Star trip later.

Li Baojun, deputy director of the central office of the Ministry of Civil Affairs, said at the news conference that by 1 p.m. Saturday, 426 bodies had been cremated. In total, 270 items that belonged to passengers were salvaged from the river, he said, and 265 of those had already been claimed by family members.

The company that operated the ship, the Chongqing Oriental Ferry Company, suspended its operations after the accident and asked its other five cruise ships on the Yangtze to dock. Officials are investigating the company.

Yangtze cruises have been popular for many years, but the capsizing of the Oriental Star was the worst boat disaster in China in decades. One major question that remains unanswered is why the captain chose to continue sailing in the storm when some other nearby ships had received a weather warning and had chosen to drop anchor or not continue on.

When it comes to ransomware, you don't always get … END_OF_DOCUMENT_TOKEN_TO_BE_REPLACED

Peyton Carr is a financial advisor to founders, … END_OF_DOCUMENT_TOKEN_TO_BE_REPLACED