You are here: Home / World / Climate Activists Will Mobilize in Paris Without Marches 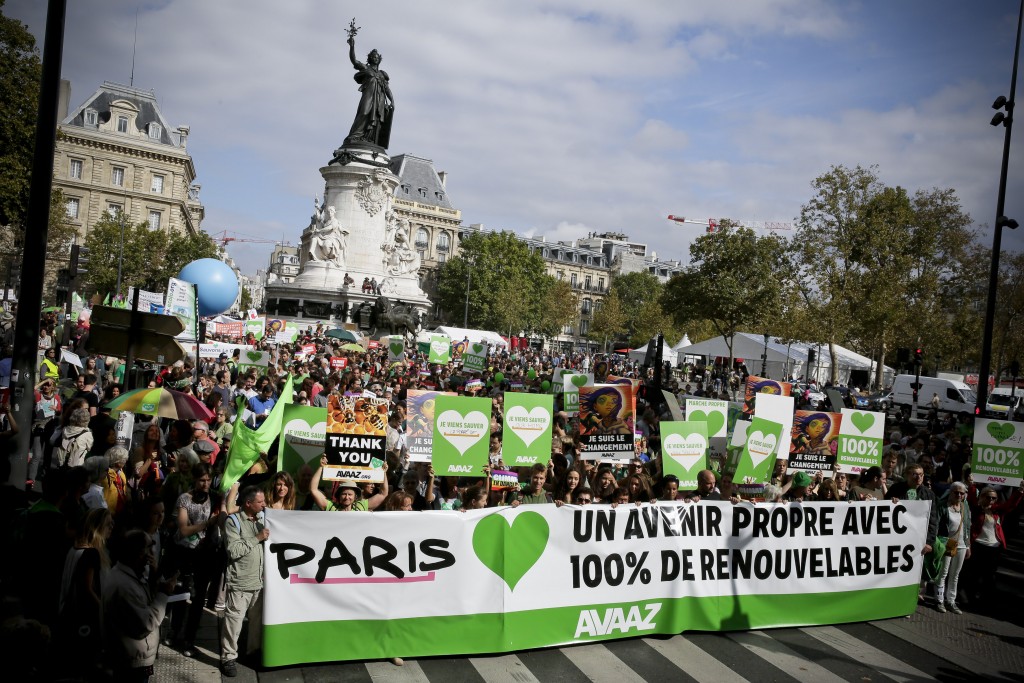 After days of uncertainty, the French government announced Wednesday that several side events previously planned for the U.N. climate talks in Paris — including two mass mobilizations meant to bookend the talks — would be cancelled.

France remains under a state of emergency following a coordinated series of deadly attacks on November 13 that killed 129 and wounded more than 350.

Hundreds of thousands of visitors are expected to be in Paris for the United Nations Framework Convention on Climate Change, which will run from November 30 through December 11. Mass mobilizations were planned for November 29 and December 12 as a way of giving civil society both the first and last word on the climate negotiations, which many hope will produce a strong international agreement on climate action.

French authorities said that while all events set to take place in closed spaces where security can be easily maintained will be allowed to proceed, the government would not allow the climate activists’ marches planned for November 29 or December 12 to proceed.

“This is a difficult decision to make that will probably disappoint some of those who had planned to take part, but in the current context, safety requirements prevail,” a statement, issued by the French Presidency’s COP21 website, said.

Organizers for 350.org, an activist group that has been closely involved in the planning of the mobilizations, expressed disappointment at the government’s decision, calling it “incongruent.”

“We do think it’s the wrong decision,” Eros Sana, France’s senior communications director for 350.org, told ThinkProgress. “The French officials are asking the population to go out in the quartiers, to drink wine, to go to work, because we cannot surrender to terrorists threats, and at the same time, they don’t allow demonstrations and marches in the streets.”

We respect the decision of the state, but we are trying to find ways to keep on mobilizing and taking the streets in one way or another

The final decision came the same day that French authorities arrested eight people and killed two — including the alleged mastermind behind the attacks — during a police raid in Saint Denis, outside of Paris’ city center. Organizers have been engaged in discussions with authorities since the attacks, and there has been much back and forth in recent days as to whether or not the marches would be allowed to continue.

Previously, authorities had suggested that organizers down-size the march to a stationary rally capped at 5,000 participants, a suggestion that organizers said “would not be acceptable,” according to the Guardian.

Instead, climate activists told ThinkProgress that they are currently engaged in “intense” brainstorming sessions meant to find creative ways to ensure their voices are heard during the talks.

“We respect the decision of the state, but we are trying to find ways to keep on mobilizing and taking the streets in one way or another during the COP in Paris, in order to make sure that we have an impact on the negotiations and contributing to our movement,” Nicolas Haeringer, campaigner for 350.org in France, told ThinkProgress.

Climate Activists Will Devise Other Methods

While it’s currently unclear what form those activities might take — Haeringer suggested something as simple as banging pots at a particular time each day during the talks — organizers expect to release concrete details within the day.

The cancelled marches are not the only civil activities that organizers have planned during the talks. Throughout the weekend of December 5 and 6, organizers will hold the People’s Climate Summit in Montreuil, a suburb outside of Paris. The summit will include debates, workshops, and seminars open to the general public. From December 7 to 11, organizers will also hold a Climate Action Zone inside Paris proper, which will include events similar to the People’s Climate Summit. Both of those events, according to Haeringer, are slated to go ahead as planned.

Side-events open to the public have historically played an important role in COP talks, allowing those not directly involved in the negotiations a chance to participate in some aspect of the negotiations. The official U.N. side-event area, known as the Climate Generations Area, is set to be located near the talks in Le Bourget, and appears to be going forward as planned.

Organizers also noted that various mobilizations are set to take place in countries across the globe, stressing that with France’s mobilizations prohibited, these global marches are more important than ever.

“This isn’t just a mobilization in France,” Sana said. “People will be marching in many places in the world, in Africa, in Italy, in other places. It’s not just about French people or Parisian people. It’s something that concerns everyone on the globe.”

When it comes to ransomware, you don't always get … END_OF_DOCUMENT_TOKEN_TO_BE_REPLACED

Peyton Carr is a financial advisor to founders, … END_OF_DOCUMENT_TOKEN_TO_BE_REPLACED