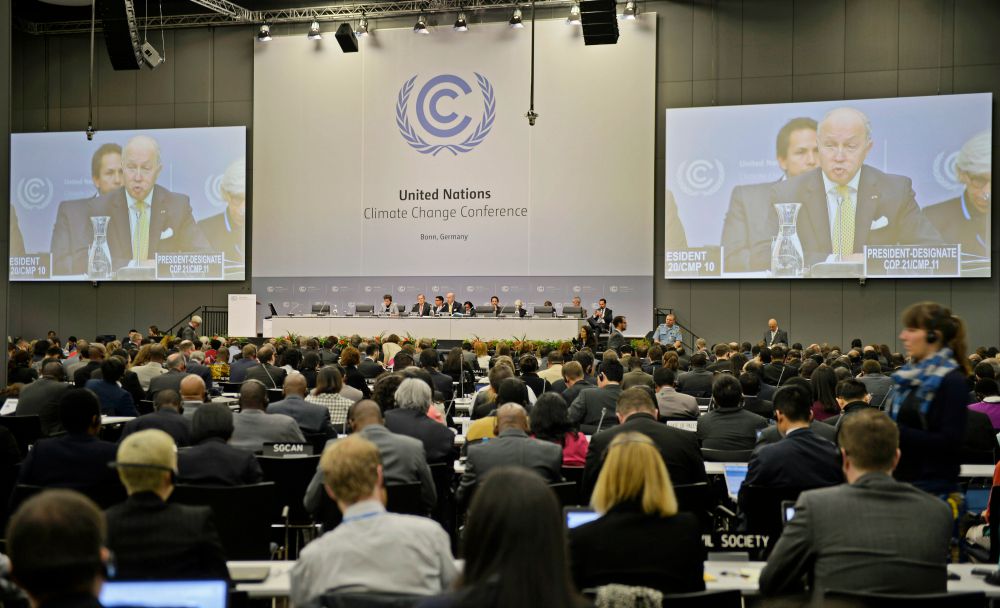 French foreign minister Laurent Fabius talks to delegates during the United Nations Framework Convention on Climate Change in Bonn, Germany, Monday, June 1, 2015. The targets countries have set so far to limit their contribution to climate change over the next several years won’t do enough to keep global warming below the 2°C threshold, according to a new report.

The report, published Wednesday by the Climate Action Tracker, analyzed the 29 “Intended Nationally Determined Contributions” (INDCs) — or countries’ goals for limiting warming post-2020 — submitted to the United Nations so far. The researchers found that, if countries stick to these commitments for 2030 and don’t take additional action against climate change, keeping warming below 2°C — the level that many scientists say is the highest warming the Earth can tolerate without major catastrophic effects (though others say 2 degrees is too high) — would become nearly impossible.

“It is clear that if the Paris meeting locks in present climate commitments for 2030, holding warming below 2°C could essentially become infeasible, and 1.5°C beyond reach. Given the present level of pledged climate action, commitments should only be made until 2025,” Bill Hare, a co-author of the report and founder and CEO of Climate Analytics, said in a statement. “The INDCs therefore need to be considerably strengthened for the period 2020-2025.”

This isn’t a surprise for many following the lead-up to Paris, however. As Climate Progress’ Joe Romm has pointed out, experts have long known that the commitments made in Paris likely won’t keep warming to 2°C — Paris is necessary for getting the country on track to 2°C, but it isn’t the end-all-be-all of climate action.

“Paris is focused on stanching the bleeding with a tourniquet,” Romm wrote in July. “The goal has always been to get firm global commitments from the big emitters to meet serious targets in the 2025-2030 timeframe so we can get off our current emissions pathway — a pathway that would blow past 4°C (7°F) warming, ruin a livable climate for centuries and make feeding 9 billion people post-2050 an unimaginably difficult task.”

Countries would have to make much more drastic cuts if the Paris climate talks are to achieve the goal of keeping warming to 2°C — cuts along the lines of getting to zero emissions in the next 85 or so years. Those types of commitments weren’t ever a consideration for Paris.

“The idea is that the Paris agreement will put us not on an emissions trajectory for 2 degrees, but on an institutional trajectory that allows us to try to meet that goal,” Alex Hanafi, climate strategist at the Environmental Defense Fund, told Climate Central in February.

“It is a fundamental misinterpretation or misunderstanding of the complexity of what we’re dealing with to even imagine that an agreement in Paris would in and of itself, at the turn of a dime, miraculously solve climate change,” she said in February. “What Paris does is to chart the course toward that long-term destination.”

Figueres also said last December that the U.N. knows that “the sum total of efforts (in Paris) will not be able to put us on the path for two degrees,” but said the world “will get there over time.”

The report lays out some general ways that countries could stick to the 2°C pathway. According to the report, countries need to plan to reduce emissions by 12 to 15 gigatons of carbon dioxide equivalent by 2025 and 17 to 21 gigatons by 2030 if they’re serious about staying under 2 degrees. And it does note that limiting warming to 2°C could still be possible, as long as more action is taken after Paris.

“While the projected emission levels for 2025 resulting from INDCs are above the published least-cost pathways, limiting warming below 2˚C is still likely to be feasible,” the report states.

The report also found that some countries, including Canada and Australia, don’t yet have legislation in place that would allow them reach the goals set out in the INDCs.

The report looked specifically at 16 of the INDCs, categorizing them in terms of their effectiveness. It found the commitments of seven countries — Russia, Canada, Australia, Japan, New Zealand, Singapore, and South Korea — to be “inadequate,” meaning that they don’t do their “fair share” to limit warming to 2°C. Six of the commitments were “medium” — the United States, China, EU, Mexico, Norway, and Switzerland’s commitments all “rely on others to have more ambitious targets in order for the world to hold warming to 2˚C.” Only two countries — Ethiopia and Morocco — had “sufficient” goals, and none had “role model” goals. The report notes, however, that 140 countries have yet to submit commitments to the U.N., including heavy-emitters like India, Brazil, and Indonesia.

The report’s authors recommend that the countries that have already submitted commitments review them and, if necessary, make their targets more stringent.

It’s true that some countries have been criticized for not going far enough with their pledges. Canada, for instance, was criticized by some environmental groups after it announced its goal of reducing its emissions by 30 percent compared to 2005 levels by 2030. The Natural Resources Defense Council called the pledge “less-than-meets-the-eye” and “another disappointing sign of [Canada’s] reluctance to fight climate change.” The group also said Canada’s commitment was “significantly weaker” than that of the United States, which aims to reduce emissions 26 to 28 percent below 2005 levels by 2025.

“These targets are vastly inadequate to protect Australians from the impacts of climate change and do not represent a fair contribution to the world effort to bring climate change under control,” Tim Flannery of Australia’s Climate Council said in August.

The ideal thing would be for these countries to submit more aggressive commitments, the report states. But short of that, the report’s authors write that the Paris Agreement should include “ramped up” efforts to “encourage greater policy action.”

When it comes to ransomware, you don't always get … END_OF_DOCUMENT_TOKEN_TO_BE_REPLACED

Peyton Carr is a financial advisor to founders, … END_OF_DOCUMENT_TOKEN_TO_BE_REPLACED