You are here: Home / Sports / Daniel Cormier’s UFC Title Reign in the Shadow of Jon Jones 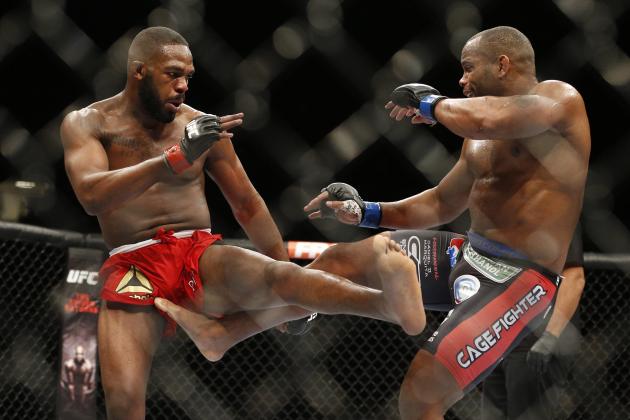 When it was all over—when the fifth round ended and the judges declared Daniel Cormier the winner and he raised his hands in the air, half in triumph, half in relief—it was difficult to look at him with anything other than awe and admiration.

Cormier had just punched and kicked, slammed and gutted his way through 25 savage minutes of the UFC 192 main event. His head was bleeding, he was limping, and his eye was swollen and bruised.

To look at him was to see the fiercest face of competition. Not just the glory, but the adversity and agony that comes along with most meaningful achievements. The visual was a powerful one, making it impossible to suggest that none of it mattered in the shadow of Jon Jones, even if it was all too easy to suggest that Cormier isn’t the rightful UFC light heavyweight champion.

And it has been all too easy. I must admit I have been among the many to downplay the legitimacy of the belt around Cormier’s waist. The rationale went like this:

Because of the lack of due process, Jones—and by extension his supporters—had every right to continue to claim the position he had rightfully earned as the division’s No. 1. Besides, he had already beaten Cormier, and not in the distant past either, soundly routing him in January by unanimous decision.

Given that set of circumstances, Cormier seemed something like a paper champion, even if it was the best kind—a former Olympian with a compelling life history and an affable manner. But a paper championship seemed about all he could claim. After all, how legitimate is any asset stolen and redistributed?

As the UFC machine chugs along, sometimes running over bystanders in its wake, the issue of fighters’ rights seems to pervade more and more stories, and this is yet another one. Jones could have appealed the UFC’s decision, if only there was a way to do so. Instead, he had no choice and no voice in the matter. Regardless of his actions in the April car crash that precipitated the UFC’s decision, he deserved to have due process. He got it in the courts but not with his employer, with whom he has had some notable and public disagreements.

Jones was unfairly stripped of the belt. I believed it then; I will always believe it. And so he is No. 1. I cannot penalize him for a decision he had no say in.

But on Saturday it struck me that if I am going to treat Jones with such fairness, then I must treat Cormier the same way.

It is not Cormier’s fault that Jones got into trouble or that the UFC reacted so strongly against Jones. All Cormier has done is react to a new set of circumstances. Given opportunity, he burst through the door. It is the exact kind of action we should demand from the sport’s champions.

Promotional titles are a strange thing anyway. They are subject to the whims of a small group of opinion-makers, which is how you occasionally end up with things like insta-interim belts and champions fighting unaccomplished challengers. In the quest to find No. 1, we are often sidetracked and distracted.

But sometimes we need to be reminded there’s a humanity to this, too.

In his last two fights, Cormier has had to train and sacrifice, suffer and struggle against Anthony Johnson and Alexander Gustafsson. He’s been wobbled and knocked down and hurt, and he’s persevered to win. And it is unfair to make all of that hollow—to demean and devalue his blood and sweat because of something beyond his control.

If you object to the characterization of Cormier as the champion, you are more objecting to the UFC’s hasty reaction than to Cormier. Jones is certainly the best light heavyweight alive. His nine-month layoff is inconsequential as a measurement mechanism. He has beaten Cormier and Gustafsson, as well as Ryan Bader and Rashad Evans—all of the four light heavyweights featured on Saturday night. By record and skill, Jones is the best. But saying Jones is the best and Cormier is the champion are not mutually exclusive statements.

It is messy, but it is true. Jones is the best, and Cormier is the champion. There. That isn’t so bad to say. After Saturday night, it’s actually starting to make some sense.

When it comes to ransomware, you don't always get … END_OF_DOCUMENT_TOKEN_TO_BE_REPLACED

Peyton Carr is a financial advisor to founders, … END_OF_DOCUMENT_TOKEN_TO_BE_REPLACED