You are here: Home / Sports / Daniel Murphy Powers Mets to a 2-0 Series Lead 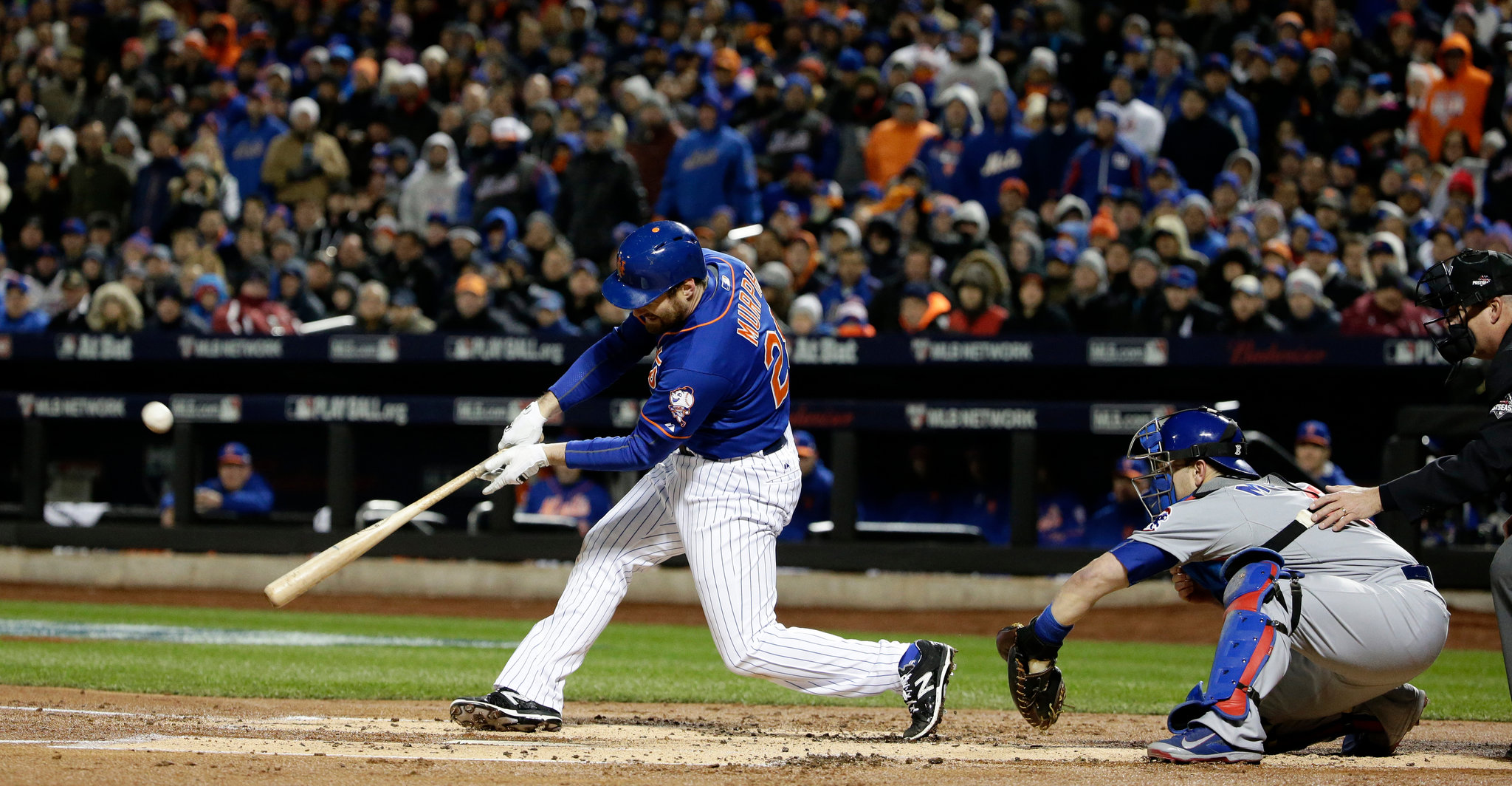 Miguel Montero, the Cubs’ catcher, escorted his pitcher, Jake Arrieta, back to the mound, consoling him as Mets fans rejoiced around them. Arrieta had just tried baiting Daniel Murphy into chasing a curveball down and in. Murphy bent down, his left knee nearly touching the ground, and golfed it with a flick of his wrist into the right-field seats.

Murphy raised a clenched fist as he rounded first base, pointed to the sky as he crossed home plate, and then screamed and pumped his fists. As Arrieta tried regaining his composure, the crowd chanted Murphy’s name, and he came out for a curtain call. This is the kind of reception one receives after homering in four consecutive playoff games, off four of the best pitchers in baseball: Clayton Kershaw, Zack Greinke, Jon Lester and now Arrieta.

The Mets’ young pitching staff has received a lot of credit, and Noah Syndergaard pitched an impressive game Sunday night, but the Mets have beaten each of those four pitchers this postseason thanks in large part to Murphy and his heroics. His legend grew larger on Sunday as he led the Mets to a 4-1 win over Arrieta and the Cubs in Game 2 of the National League Championship Series, taking a two-games-to-none lead as the series shifts to Chicago. 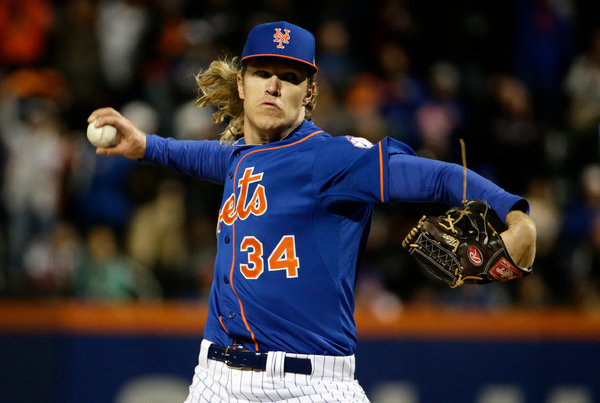 “We’re having a whole bunch of fun right now,” Murphy said during his postgame press conference, making postseason baseball sound as if this were a July series in San Diego.

It is hard to overstate how jarring that sight was, Arrieta needing to be comforted on the mound before he had recorded a single out. He won 22 games during the regular season and posted a 1.77 E.R.A., including an 0.75 E.R.A. in the second half. He seems to the be the front-runner for the National League Cy Young Award, just ahead of Kershaw and Greinke.

The Mets did not seem intimidated, though. In their first three at-bats, Curtis Granderson punched a single through a shift; David Wright broke out of a slump, clubbing a double to center field over Dexter Fowler’s head; and Murphy pulled that two-run homer.

Murphy had never been known as a power hitter, or an elite player. He hit just 14 home runs this season in 130 games — a career high. Over the past four years, during the prime of his career, he averaged about 10 home runs per season. Before this postseason, his career highlight was making the 2014 All-Star Game, as the Mets’ required representative.

Murphy has credited Kevin Long, the Mets’ hitting coach, during this surge, saying that Long had helped him with his approach and played to his strengths. Murphy has always had a natural ability to make contact; he had a smooth, easy line-drive swing that produced a good batting average, a bunch of doubles and the lowest strikeout rate in the major leagues this year. Long simply instructed him to be more aggressive and hunt for the middle-inside pitch, in particular, and Murphy started pulling the ball more and created more force when he made contact.

Two pitches before his home run Sunday, Murphy pulled a slider just foul. Arrieta tried coming back with a 1-2 curveball, and thought, for the most part, it was a good pitch.

“He’s the hottest hitter in the postseason right now,” Arrieta said. “He’s got a good approach. He’s seeing it really well. Later in the ballgame, I still made some good pitches to him, but anytime the ball has some height and he’s able to get the barrel to it, it seems like now he’s doing damage.”

Kershaw, Greinke, and Lester would probably echo those sentiments. Murphy hit the first homer so hard off Kershaw that his bat imprinted his name on the ball. The fifth one, on Sunday off Arrieta, tied Murphy with Mike Piazza for the most career postseason home runs in franchise history. Only seven other players had ever homered in four consecutive playoff games, and the last to do that was Evan Longoria in 2008.

After that home run, the Cubs so respected Murphy that they intentionally walked him in his second at-bat to get to Yoenis Cespedes, perhaps the Mets’ most dangerous hitter in the regular season. Cespedes drove in a run anyway, on an infield single. The Mets scored four runs off Arrieta and chased him after five innings, tying his shortest outing of the season.

“We feel good,” Travis d’Arnaud said. “We feel like we can beat anyone at any given point.”

Syndergaard, the rookie making his second postseason start, was in the video room, preparing, when Murphy homered. Syndergaard raced into the dugout and joined the mob of teammates celebrating, waiting for Murphy. “Kind of blacked out there,” he said.

Syndergaard rode that early lead and outpitched Arrieta, holding the Cubs to one run and three hits in five and two-thirds innings. But he had help. Granderson robbed Chris Coghlan of a home run with a leaping catch, and Jon Niese struck out Anthony Rizzo to strand a runner Syndergaard had put on base.

Syndergaard has readily admitted that he was not capable of pitching like this, in a game of this magnitude, a few months ago, when he relied so heavily on his fastball. But along the way, Dan Warthen, the pitching coach, taught him new grips for his off-speed pitches and reworked his delivery. As they kept working, and Syndergaard saw improvement, his confidence soared, and he developed enough trust to use all of his pitches in big situations.

“I used to think you had to jump off the mound to use your legs,” Syndergaard said in September. “It’s hard to explain. Now it’s almost like I’m gliding. I’m not throwing with my arm anymore. I’m throwing with my body. The example I use is: My arm is like a trebuchet. It’s got to be loose and whiplike, and you have to use the force of your body to deliver the pitch. It’s just, my arm feels good every day. I’m not fighting my body. I’m able to stay fluid.

Just three days before Sunday’s game, Syndergaard had looked dominant pitching out of the bullpen in the clinching game against the Los Angeles Dodgers in the teams’ division series. And he still looked fresh as he struck out nine Cubs, four of them on off-speed pitches.

Now that Matt Harvey had beaten Lester and Syndergaard had beaten Arrieta, the Cubs had thrown their best two starters, and the Mets had still taken a two-game series lead, with Jacob deGrom, perhaps their best starter, ready to pitch Game 3. As the Mets recorded the final out Sunday, the Cubs retreated with their heads hung, perhaps knowing what lay ahead.

When it comes to ransomware, you don't always get … END_OF_DOCUMENT_TOKEN_TO_BE_REPLACED

Peyton Carr is a financial advisor to founders, … END_OF_DOCUMENT_TOKEN_TO_BE_REPLACED