You are here: Home / Lifestyle / Darth Vader Marches in on Funeral for Woman Who Loved Halloween 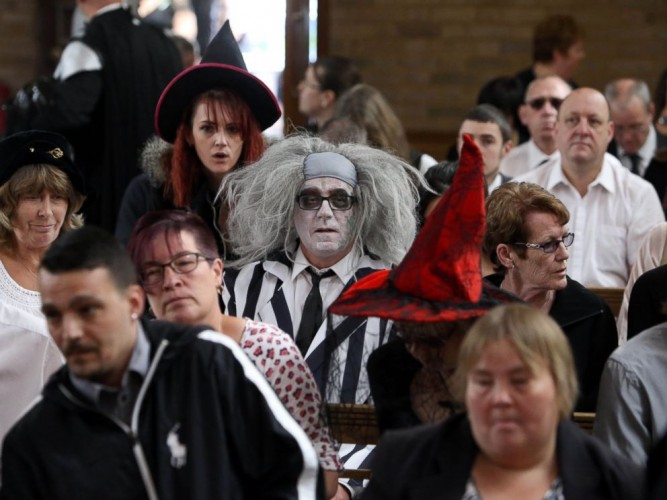 Darth Vader is not usually a welcome guest in the fictional world of “Star Wars,” but when he marched into a funeral service in Luton, England, on Wednesday, he brought joy and levity to a somber occasion.

Donning the iconic black garb and helmet was Brett Houghton, who led a service for a woman known for her love of Halloween.

“The family asked me if I could dress up,” said Houghton, operation coordinator from Co-op Funeralcare told ABC News today. “I decided to wear a ‘Star Wars’ outfit I already had.”

Witches and Beetlejuice were among those remembering Lorna Johnson, 56, who died of cancer in June. Her son, Neil Johnson, 34, told the Press Association that his mother’s funeral reflected “her love of Halloween and fun.”

“We always had parties, dressed up, decorated the house,” Neil Johnson said, adding that his mother often described herself as “a white witch.”

When Houghton was preparing the coffin, he noticed she was wearing a purple cape. “I thought it was different,” Houghton said, “but then I started chatting with the family who told me about her love of Halloween and I can relate to that.”

As he was leading the carriage, Houghton was even humming the “Star Wars” theme song, he said.

Neil Johnson dressed as the Tasmanian Devil while his sisters wore witches’ hats.

The music played at the service reportedly included Dolly Parton’s “I’m Gonna Miss You” and a trance song to end the funeral.

When it comes to ransomware, you don't always get … END_OF_DOCUMENT_TOKEN_TO_BE_REPLACED

Peyton Carr is a financial advisor to founders, … END_OF_DOCUMENT_TOKEN_TO_BE_REPLACED