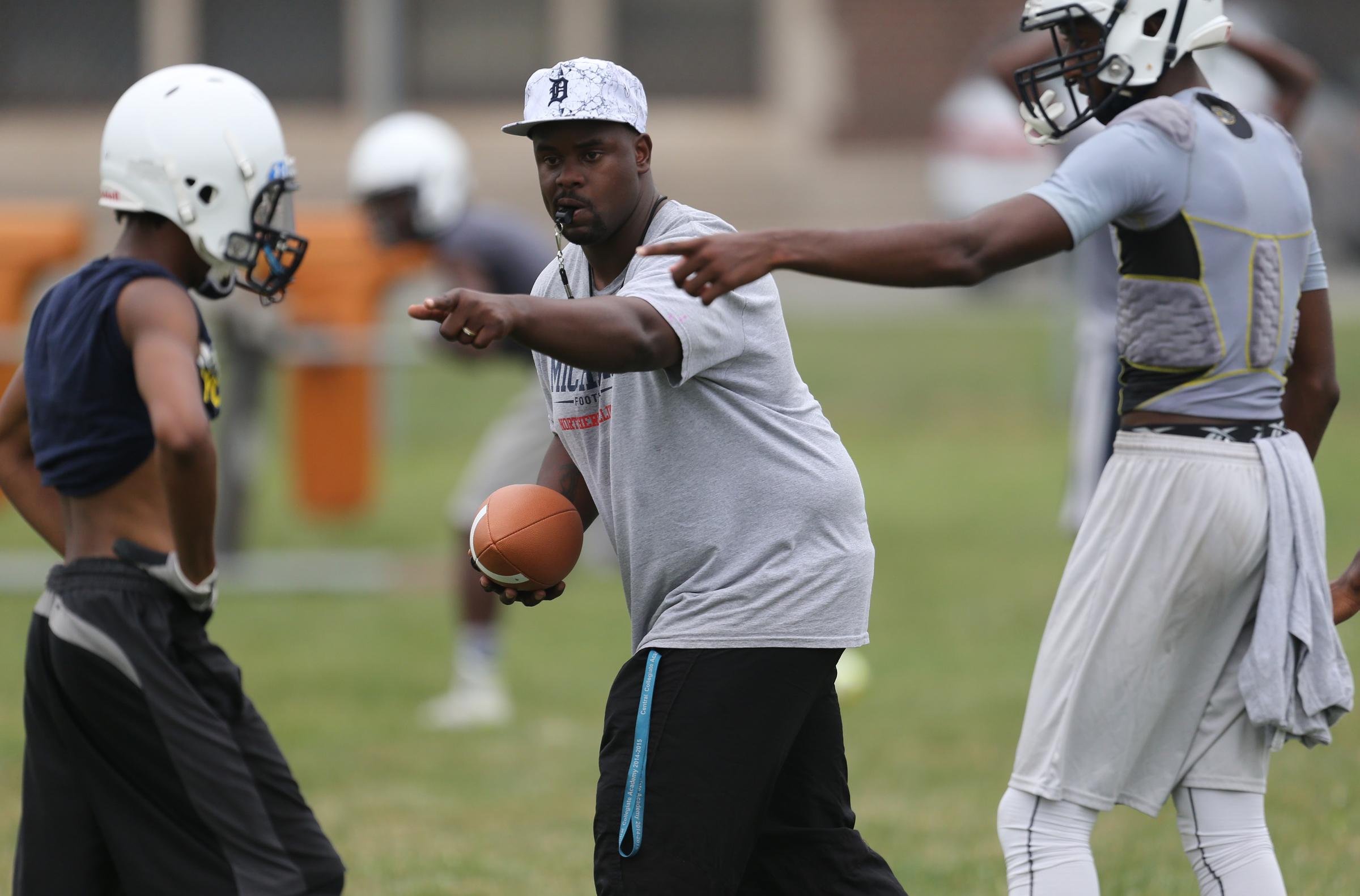 John Thompson was like so many coaches and players who had difficulty falling asleep Sunday night, a few hours before high school football officially began at 617 schools across the state. But Thompson didn’t sleep a wink before he conducted his first practice as the rookie coach at Detroit Central. He couldn’t sleep because he was at work.

Thompson is a supervisor at the Chrysler LLC Sterling Stamping Plant in Sterling Heights, and he worked the midnight shift so he could be at the school at Linwood and Tuxedo early Monday morning doing what has been his passion for most of his 29 years on this planet.

“This is where I’ve been my whole life,” Thompson said as the players warmed up for their first practice. “If I wasn’t playing, I wanted to be a part of it. Coming up coaching, giving kids a chance to get to the next level like I did, that’s motivation to do it.”

Thompson made the 2003 Free Press Dream Team at Detroit Crockett and was a four-year linebacker at Michigan.

As the players began practice running sprints Monday, Thompson laughed at the memory of his playing style and how football can’t be taught that way in this era.

“They don’t play the game like I played it no more,” he said. “Without a doubt I was going to put my helmet on you, and that just doesn’t happen these days. I’ve got to coach it a little more technically sound.”

After spending one year as an assistant at Ecorse, Thompson believes he is ready to take over a program.

Better yet, his players believe it, too.

They haven’t had enough practice sessions to completely understand his X’s and O’s yet, but they have spent enough time with him to know he is genuine and has their best interests at heart.

“He’s so dedicated,” junior wide receiver/safety Desmond Hatcher said. “He loves being with the kids. He’s always playing around with us, taking us out somewhere, having us stay at his house, spending time with him.”

Thompson was hired Nov. 14 by former Central principal Steven McGhee, who happened to be his coach at Crockett.

It didn’t take the players long to realize they hit the lotto with their new coach.

“He was a Michigan linebacker, and he was a blue-chipper,” junior quarterback Darius Lynuam said. “I had a principal, Mr. McGhee, and he told me about him. And, oh yeah, I went on Google, too.”

Once he took the job, Thompson began hanging out at Central on a regular basis, looking for guys to join the team and setting up a legitimate off season program.

“I had to sacrifice some sleep, but I had to get in these hallways and get the kids that didn’t know they could play but can play,” he said. “Strength and conditioning was a big struggle because they never did it really.”

Thompson realizes he is not coaching at Cass Tech or King, rosters filled with Division I talent. But he is happy with the talent level he had out for the opening practice for a Central team that went 6-4 last season.

A major concern for Thompson is the neighborhood surrounding Central works against him. You can find abandoned house after abandoned house on Tuxedo and area street, and many parents don’t want their kids in that environment.

But Thompson is creating a safe haven for the players who choose to be part of his program.

“When you’re with me, you’re under my care, comfort and concern,” he said. “As long as they’re where they’re supposed to be, those things that happen out there won’t happen.”

Thompson and his wife, Chana Vinson Thompson, a former track star at U-M, have no children, but Thompson had about 35 additions to his family at practice and was delighted to be in his element Monday as the football season began.

“This is what I think about most of the time,” he said. “There’s nothing I’d rather do more than this. My wife understands the grind. She dropped me off today.”

She may not be back to pick him up until November.

When it comes to ransomware, you don't always get … END_OF_DOCUMENT_TOKEN_TO_BE_REPLACED

Peyton Carr is a financial advisor to founders, … END_OF_DOCUMENT_TOKEN_TO_BE_REPLACED