You are here: Home / Entertainment / Drake Goes Above And Beyond With His Latest Rihanna PDA 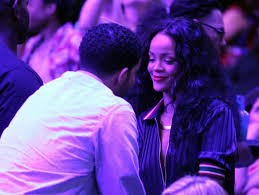 Drake must really want you to know how he feels about Rihanna.

The rapper Drake presented her with the Michael Jackson Video Vanguard Award at Sunday’s VMAs, but a simple Instagram post congratulating his girlfriend wasn’t enough for Drizzy aka “Drake”. He needed to take out an entire billboard to show Rihanna how proud he was of her for earning the coveted award.

The billboard, seen in Los Angeles, reads, “Congratulations to Rihanna from Drake and Everyone at Ovo,” and features his record label Ovo’s signature owl symbol.

Drake also publicly professed his love at the VMAs when presenting the Vanguard award to Rihanna, before the two hugged and possibly kissed (despite the thousands of people recording the moment, no one can really tell), another billboard featuring Drake’s Ovo Sound and Kanye West’s G.O.O.D. Music labels declared “calabasas is the new abu dhabi,” leading many fans to speculate that a long-rumored Drake and Kanye collaboration is on the way.
The rapper is also believed to be responsible for this Los Angeles billboard, which displays a line from his song “Grammys.”

And he also allegedly has one last word for his “Views” critics, written in the now-infamous handwritten font style that has become synonymous with the rapper.
Haters, beware: Drake always gets the last word.

When it comes to ransomware, you don't always get … END_OF_DOCUMENT_TOKEN_TO_BE_REPLACED

Peyton Carr is a financial advisor to founders, … END_OF_DOCUMENT_TOKEN_TO_BE_REPLACED