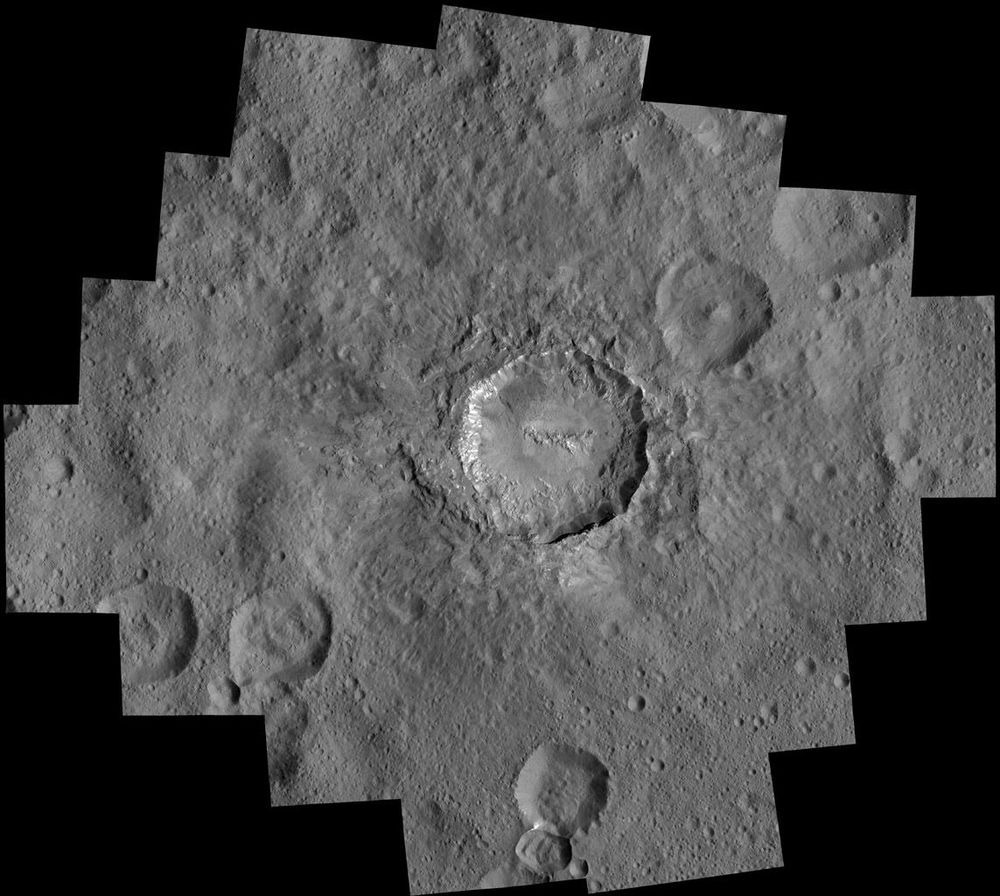 Evidence of a landslide, bright features and a “hidden treasure” are on brilliant display in new NASA photos of the dwarf planet Ceres. The new images were taken by NASA’s Dawn spacecraft from its lowest orbit around Ceres yet, about 240 miles above the world’s surface.

The photos show the aftermath of a possible landslide on the rim of Haulani Crater, which NASA said is likely a relatively new crater.

“Haulani perfectly displays the properties we would expect from a fresh impact into the surface of Ceres,” Martin Hoffmann, Dawn scientist, said in a statement.

“The crater floor is largely free of impacts, and it contrasts sharply in color from older parts of the surface.”

The edges of Haulani seem to be demarcated by straight lines, which occurs when a crater is formed over the top of already existing geological “stress patterns,” NASA said.

Those faults are further evidence of Ceres’ past tectonic activity.

The new images also reveal more about the “hidden treasure” of Oxo Crater, the second-brightest feature on the world’s surface, according to NASA.

The brightest feature on Ceres lies within Occator Crater, a large feature on the dwarf planet that plays host to a number of bright spots and even a mound covered in the bright material.

Scientists are still attempting to figure out the exact cause of the bright spots, but at the moment, the best guess is that they are made of reflective salts on the world’s surface.

Oxo’s bright bits aside, the small crater seems to have unique looking “slump” along its rim, according to NASA, meaning that some material has sloughed off and fallen to the surface.

The crater’s floor may also be different than anywhere else seen so far on Ceres, which may give scientists a new look at how the world evolved.

“Little Oxo may be poised to make a big contribution to understanding the upper crust of Ceres,” Chris Russell, principal investigator for Dawn, said in the statement.
Source link

When it comes to ransomware, you don't always get … END_OF_DOCUMENT_TOKEN_TO_BE_REPLACED

Peyton Carr is a financial advisor to founders, … END_OF_DOCUMENT_TOKEN_TO_BE_REPLACED