You are here: Home / Entertainment / Emilia Clarke Heats Things Up in the Last Episode of Game of Thrones 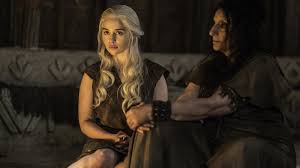 Daenerys Targaryen is one hot ruler. During episode 4 of Game of Thrones‘ sixth season, Khaleesi reminds us yet again why she is called the Unburnt — unfortunately, her clothing does not share that title.

Emilia Clarke spoke with Entertainment Weekly about doing yet another nude scene and confirms that the badass nude woman who emerges from the Temple of the Dosh Khaleen is actually her and not a body double.

I’d like to remind people the last time I took my clothes off was season 3. That was awhile ago. It’s now season 6. But this is all me, all proud, all strong. I’m just feeling genuinely happy I said ‘Yes.’ There ain’t no body double!”

(Clarke does have a body double who sometimes appears on the show.)

The showrunners and Clarke also discussed how the nude scene came together, saying they did shot that moment on a closed set in Belfast, while the other Dothraki scenes were shot in a desert in Spain — a big difference from when Clarke was asked to be naked in season 1 after birthing her dragons.

“Taking off my clothes is not the easiest thing, but with the magic of the effects, I don’t have to do a season 1 and go on a cliff and do it,” she notes. “I’m in control of it.”

I’ll vote for whichever candidate burns down a temple and walks naked through the flames and lives. #Election2016 #gameofthrones

Clarke has previously been vocal about the use of nudity on the HBO show, begging for an increase in male genitalia in Westeros. She also took to Instagram to shut down tabloids that claimed she had an issue doing sex scenes.

“Sometimes explicit scenes are required and make sense for the characters/story, as they do in Westeros,” she wrote. “If it’s gratuitous for gratuitous sake, then I will discuss with a director on how to make it more subtle. In either case, like a good Mother of Dragons, I’m always in control.”

I was followed into a party by a journalist who asked me a question about female empowerment and then quoted me entirely out of context for an outlet I didn’t agree to speak with. So I feel now, with the beauty of Instagram I should clarify my statements, if for nothing else than for posterity. In drama, if a nude scene forwards a story or is shot in a way that adds insight into characters, I’m perfectly fine with it. Sometimes explicit scenes are required and make sense for the characters/story, as they do in Westeros. If it’s gratuitous for gratuitous sake, then I will discuss with a director on how to make it more subtle. In either case, like a good Mother of Dragons, I’m always in control. #dracarys #bodiesmaybetemplesbutmindsarewhatmatter #MODforreal

Clarke may have been upfront about this scene after Lena Headey, whose character Cersei Lannister appeared nude last season, admitted to using a body double for the scenes and was later criticized by fans for doing so.

Naked or not, Clarke tells EW that Dany’s campaign for the thrown may get harder to resist after Sunday’s episode — a welcome change considering her somewhat boring and somewhat exhausting plot thus far.

“The Dothraki are the missing piece of her crew — she’s seemingly indestructible having Dothraki on her side.”

Dany first revealed her fireproof dragon’s blood in season 1, but it’s been largely ignored since then (most likely because George R.R. Martin didn’t pen a scene like that for her character in A Song of Ice and Fire). But Dan Weiss explained to EW why they chose to tap into her “superpower.”

“It’s almost like the revelation she had when Jorah and Daario come to the rescue. She’s like, ‘Wait, I can do something none of these people can do and now that these two people can help me, I can use that to my advantage.’ It’s a very simple solution, a plan where you can use three people to take out dozens in a very dramatic way by just lighting things on fire and standing there,” Weiss says.

When it comes to ransomware, you don't always get … END_OF_DOCUMENT_TOKEN_TO_BE_REPLACED

Peyton Carr is a financial advisor to founders, … END_OF_DOCUMENT_TOKEN_TO_BE_REPLACED