You are here: Home / Business / Emma Stone and Ryan Gosling left their hand and footprints at Hollywood 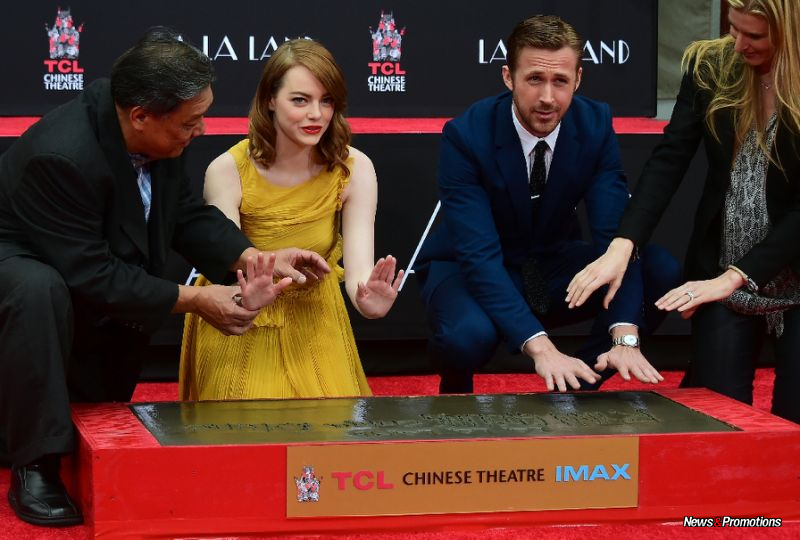 The actress Emma Stone and the actor Ryan Gosling were honored on Wednesday in Hollywood at a ceremony during which they left their hand and footprints in the cement nearby the famous Chinese Theater on the Hollywood Boulevard in Los Angeles, reports the Hollywood Reporter. The two stars have played together with three occasions in the movies: ‘Crazy, Stupid, Love’ in 2011, ‘Gangster Squad’ in 2013 and most recently, in the musical comedy ‘La La Land’, one of the favorites of the next Oscars. The movie has already been launched on Friday in Los Angeles and in New York. After they were introduced, Emma Stone and Ryan Gosling expressed their gratitude. ‘This is embarrassing – I thought this was maybe the kind of a thing where you come and put your hand prints in cement and then they take them away and put them up somewhere.

I was just told that they were going to stay here, so I cried a little bit inside. This is an incredible experience and making this movie was an incredible experience. What a place to get to commemorate that’, said Stone. ‘I’m still not completely convinced that we’re not going to be arrested for vandalism, but I’m going to take your word for it that we’re allowed to do this. We had an opportunity to shoot in most of Los Angeles’ iconic locations exceptions for this (the Chinese Theater) so I guess this is the final piece to the puzzle. It’s a beautiful way to end this experience’, said Gosling. Later, the two actors left their fingerprints and signatures into cement.

Emma Stone continued to joke: ‘I came with an extra pair of shoes that will be forever broken now. But guess who didn’t change his shoes: Ryan’, she said, quoted by the Hollywood Reporter.

When it comes to ransomware, you don't always get … END_OF_DOCUMENT_TOKEN_TO_BE_REPLACED

Peyton Carr is a financial advisor to founders, … END_OF_DOCUMENT_TOKEN_TO_BE_REPLACED