The Environmental Protection Agency (EPA) took a major step this week to protect the thousands of U.S. agricultural workers who are exposed to pesticides every year, many of whom suffer from chronic health effects years after they stop working in the fields.

The finalized revision of the WPS includes increased mandatory training sessions to inform farmworkers on the protections their employers are required to offer them; expanded training to teach workers how to reduce “take-home exposure;” new anti-retaliatory provisions to protect whistleblowers who raise concerns; and “no-entry” application-exclusion zones up to 100 feet surrounding pesticide application equipment to protect workers from pesticide overspray. And, for the first time ever, the revision bars minors under 18 from handling pesticides.

The regulation, which will be phased in over the next two years, will affect agricultural workers and pesticide handlers who work on farms and in forests, nurseries, and greenhouses. Livestock workers are not covered. Once fully implemented, the revised regulation is expected to “avoid or mitigate approximately 44 to 73 percent of annual reported acute WPS-related pesticide incidents,” according to the EPA.

Virginia Ruiz, Director of Occupational and Environmental Health at the advocacy group Farmworker Justice, told ThinkProgress that EPA could have “gone farther in certain areas,” but welcomed the revised regulation as “a step in the right direction.”

Children under 18 — their bodies are still developing and a lot of different systems are still maturing.

Setting a minimum age for pesticide applicators was especially well-received by farmworker organizations. “Children under 18 — their bodies are still developing and a lot of different systems are still maturing,” Ruiz noted. “Exposing them to risk could have lifelong health effects.”

“People are too immature at 16 years-old to be able to handle pesticides, though many people thought that 18 was too young,” Jeannie Economos, Pesticide Safety and Environmental Health Project Coordinator at the grassroots organization Farmworker Association of Florida, told ThinkProgress in a phone interview. “Younger people will think there’s no problem, they may not wear personal protective equipment, they might not think it’s necessary, or realize what they’re doing to their health or other people.”

Ruiz agreed that 16 and 17 year-olds don’t have “the emotional maturity” to work with pesticides because they may not know how to interact with their bosses when they have health-related questions or concerns. “They might not feel comfortable challenging their supervisors or employers about the potential harm,” she said. 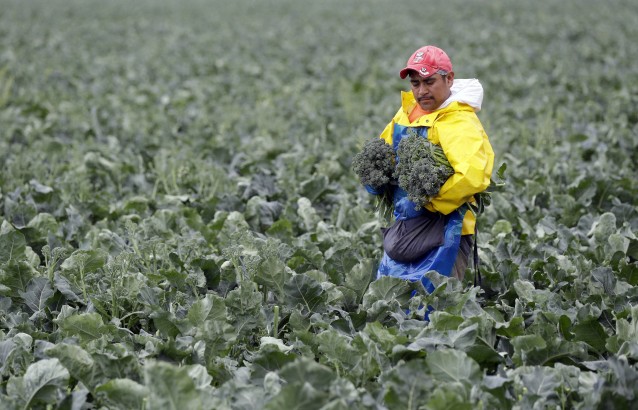 A farmworker picks broccolini in the rain on Wednesday, Feb. 26, 2014, in King City, Calif.

An estimated 5.1 billion pounds of pesticides are used in the United States annually. There are anywhere between 1,800 and 3,000 occupational incidents involving pesticides every year, though the number is likely even higher due to widespread underreporting.

Mily Treviño-Sauceda recalled the time a plane flew over the citrus farm where she worked and doused her and other workers with pesticides. “Everyone just started suffocating,” Treviño-Sauceda told Earth Justice. “I tried to run away but couldn’t see or breathe. Everyone was covered with white dust and their eyes were itchy and watering.” Another farmworker Jovita Alfau, a U.S. legal resident and Mexican native, became dizzy, weak, and vomited after she was sent back to tend hibiscus plants 24 hours they were sprayed down. And yet another farmworker Yolanda Gomez told the Center for Public Integrity, “When you go to the field you go clean, and when you come out of the field you can see your eyes are very red.”

Studies have shown a correlation between pesticide usage and Non-Hodgkins lymphoma, prostate cancer, Parkinson’s disease, lung cancer, chronic bronchitis, and asthma, among other problems that could affect workers on an organic and cellular level.

That’s an environmental justice issue. Why are farmworkers still exposed to this pesticide?

“Chlorpyrifos — it’s an organic phosphate pesticide — was banned for residential use because of its impacts on children,” Economos said. “But it’s still used in agriculture. Why is that? That’s an environmental justice issue. Why are farmworkers still exposed to this pesticide?”

It’s not just direct exposure that can make people sick — without proper training to remove clothing that’s been exposed to pesticides, farmworkers can also take home the residue with them to family members who then get sick. “At most agricultural work sites, there aren’t facilities on-site for workers to change out of their work clothes or bathe,” Ruiz said, explaining that her organization teaches workers to reduce pesticide exposure after their work shifts end. “Often workers will go home in the same clothes that they were wearing at work. If they have contact with their family members, for example, hugging their kids or touching other family members who haven’t been working in the fields, they can be exposed to pesticide residue.” 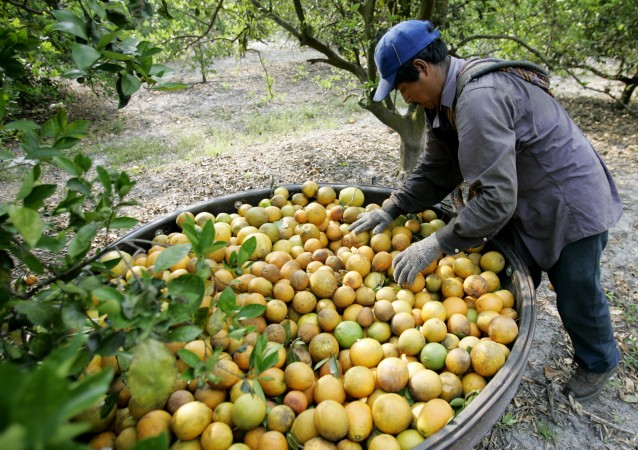 According to the U.S. Department of Labor’s National Agricultural Workers Survey, at least 53 percent of U.S. farmworkers are undocumented. And while California has moved on expanding health care options for undocumented farmworkers, many other states have not followed suit.

Farmworkers may have the option of going to community health centers where they can pay based on a sliding scale, but they could run into issues like misdiagnosis. Economos said that health providers are not trained to look for symptoms of pesticide exposure and farmworkers may not feel comfortable talking about their health history.

“The most common symptom of pesticide exposure are rashes,” Economos explained. “A farmworker will go in for a rash, but the doctor will just say, ‘you have contact dermatitis, here’s some cream, go home.’ If the doctor doesn’t ask what the occupation is or if the farmworker doesn’t tell them either because they don’t think to tell them or they’re afraid to tell them, then the doctor never diagnoses it as contact dermatitis related to pesticide exposure, which means that the treatment will only last as long as the next exposure.”

At least some farmworkers are likely too scared to stop working with pesticides because they need their jobs. A survey of New Mexico farm workers found that managers told workers they would lose their jobs if they refused to work in direct contact with pesticides. What’s more, workers are often not warned about the chemicals they are working with, and do not know they have been poisoned until they start vomiting or have trouble breathing.

“It’s hard to exercise your rights if you don’t know of their existence,” Department of Labor Thomas Perez said on a conference call. “Our goal is to bring them out of the shadows and into the sunshine.”

Still, agribusinesses and farm groups are reluctant to embrace the new changes. Paul Schlegel, director of environment and energy policy at the American Farm Bureau Federation, released a statement indicating that the EPA “is piling regulatory costs on farmers and ranchers that bear little if any relation to actual safety issues.” The EPA indicated in its revision standards that the average expenditure of each farmworker would be about $30 per year. Meanwhile, the Pesticide Policy Coalition stated in its letter that there was “a lack of evidence of elevated levels of chronic illnesses among farmworkers.”

When it comes to ransomware, you don't always get … END_OF_DOCUMENT_TOKEN_TO_BE_REPLACED

Peyton Carr is a financial advisor to founders, … END_OF_DOCUMENT_TOKEN_TO_BE_REPLACED