You are here: Home / World / Escalating Violence in Israel Not Pulling Back 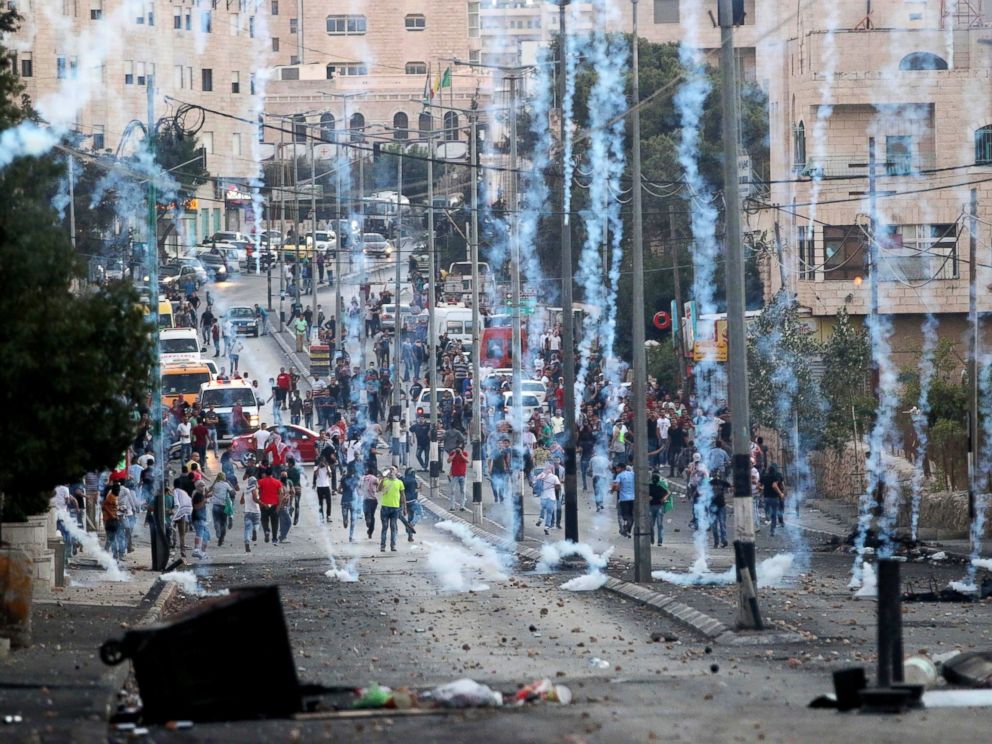 Nearly three weeks of deadly attacks and clashes throughout Israel and the Occupied Palestinian Territories have stoked fears this conflict may escalate. Over the weekend the death toll climbed higher, and neither side is pulling back.

Here is an explanation of why the violence started, and how it is spreading.

What Happened This Weekend?

On Sunday, a Bedouin man who was an Israeli citizen allegedly opened fire inside the central bus station in the southern Israeli city of Beersheba.

The alleged attacker, identified today as Muhanad Al-Aqabi, 21, was armed with a gun and a knife when he fatally shot an Israeli soldier at the station, officials said. He allegedly proceeded to take the soldier’s M-16 but was quickly shot dead by Israeli security forces on scene.

In addition to the alleged gunman and the soldier, identified as 19 year-old Sgt. Omri Levy, six other Israelis were also injured as an Eritrean was shot by an Israeli security guard who reportedly believed the African was a second assailant.

In cellphone videos from the bus station, a lynch mob descends on the Eritrean after he was shot, lying on the ground. Bystanders kick him, throw a bench at him and pin him to the ground with a chair as he bleeds profusely.

The mob blocked paramedics from evacuating the Eritrean, according to eyewitnesses, chanting “Death to Arabs,” “Arabs out!” and “Am Israel Hai” (“The people of Israel still live”).

A hospital spokeswoman confirmed to The Associated Press that the Eritrean man, identified as Habtom Zarhum, 29, was an asylum seeker who died from his injuries, bringing the total number of fatalities from the incident to three people.

Apart from the Beersheba attack, Israeli police say three Israelis were wounded in six stabbing attacks over the weekend. All six alleged Palestinian assailants were shot dead, including two in Jerusalem.

On Friday, a Palestinian man, wearing a “press” T-shirt and purportedly posing as a photographer, allegedly stabbed and wounded an Israeli soldier near the West Bank city of Hebron.

What Happened in the Other Recent Clashes?

There have been daily clashes in the Occupied Palestinian Territories, across the West Bank and on the Gaza border in recent days, with tires being burned, rocks thrown and Israeli forces responding with tear gas, rubber bullets and live ammunition.

The Palestinian Red Crescent says nearly 2,000 Palestinians have been injured since the beginning of the month.

How Did This Spate of Violence Start?

Palestinians point to the settler arson attack back in July that killed three people, including a toddler. And Israelis contend it escalated when Palestinians shot dead two settlers at close range in front of their children Oct. 1.

But Palestinians say Israeli settlement construction continues in the Occupied Palestinian Territories, and frustration among the younger generation of Palestinians has reached a breaking point.

The existing frustration has been fueled by ongoing and intensifying confrontations around the al-Aqsa mosque and the Temple Mount. A key national symbol for Palestinians, it is Islam’s third holiest shrine and the most sacred site in Judaism. Palestinians fear increasing visits by Jewish groups, and continued restrictions on Muslim access, will erode Muslim religious control there. But Israel has adamantly denied the allegations, saying there are no plans to change the status quo and accuses the Palestinians of incitement by spreading the rumors.

Since the beginning of the month, at least nine Israelis have been killed,along with 41 Palestinians, 20 of whom Israeli authorities have identified as attackers. The remaining 21 Palestinians died in clashes with Israeli troops. The final fatality was the Eritrean man who died during the bus station attack.

Is This The Third Intifada?

The violence in Israel has been dominated by Palestinian teenagers stabbing Israelis in so-called “lone wolf” attacks and without the political and organizational support that existed during the first and second intifadas.

Israeli Prime Minister Netanyahu said today, “we are in an extended struggle that we will surely win.”

Palestinian leader Mahmoud Abbas condemned a recent arson attack on Joseph’s Tomb, revered by some Jews. For their part, Hamas and Islamic Jihad have welcomed the attacks, saying Sunday’s attack in Beersheba was the “natural response to the cold-blooded executions of Palestinians by the IDF and the settlers.”

What Is Being Done to Stop the Violence?

Israeli Police Superintendent Micky Rosenfeld has bolstered the city’s police force, and the cabinet approved an additional 300 soldiers to be placed under police command. Rosenfeld told ABC News there are security officers every 20, 40 and 60 yards throughout the Old City of Jerusalem; a noticeable increase in an already heavily policed city.

A makeshift wall has been erected in the East Jerusalem Palestinian neighborhood of Jabel Mukaber, adding to the roadblocks that already ring it. The six concrete sections stand as a damaging, controversial symbol and a de facto division in the heart of Jerusalem.

What’s the US Doing About It?

Secretary of State John Kerry is about to get more involved. A senior State Department official confirmed to ABC News that Kerry will meet with Israeli Prime Minister Netanyahu Thursday in Germany and Palestinian President Abbas Saturday in Jordan. As of today, however, Israeli officials worried Netanyahu may have to cancel his trip to Germany for the second time in as many weeks.

A senior official in the Netanyahu government says the Israeli prime minister will not offer any concessions to the Palestinians during his scheduled meeting in Berlin later this week with Kerry.

When it comes to ransomware, you don't always get … END_OF_DOCUMENT_TOKEN_TO_BE_REPLACED

Peyton Carr is a financial advisor to founders, … END_OF_DOCUMENT_TOKEN_TO_BE_REPLACED