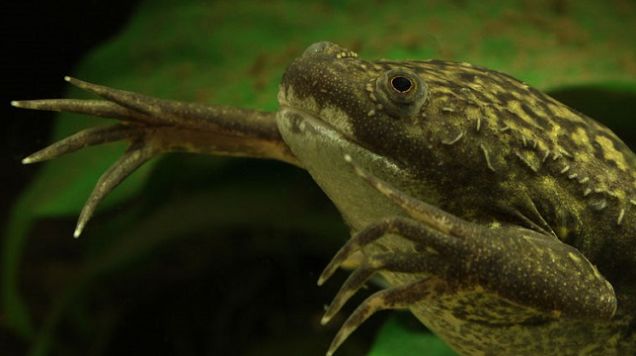 Very occasionally, African clawed frog tadpoles never stop being tadpoles and into frogs. They increase in size, and they reach a form of sexual maturity, but they look eternally young. And then things get grotesque.

In laboratories, scientists use the Xenopus Laevis, the African clawed frog, as a model to study how a body develops from a few cells into a fully-formed and functioning adult. So they must have been intrigued when they discovered that some tadpoles in laboratories retain a version of youth for their whole lives.

An animal occasionally retaining a juvenile form isn’t entirely unique. Most of the time, retaining the characteristics of youth, a trait called neoteny, means a lack of sexual development. “Grown up” clawed frog tadpoles, when dissected, had gonads while their younger counterparts had undifferentiated tissue. The fact that these animals keep their youthful traits while sexually developing make them the closest thing we know to being “truly neotenic.”

So why aren’t we trying to replicate the success of these eternally young tadpoles, so we can all stay young forever? Well, there are problems. Some are obvious. The tadpoles develop a hunched back as they start to take on the shape of a frog without losing their tails. They also have large, unwieldy fat deposits that drag on them.

Other problems take a little time to figure out. The grown tadpoles, scientists noticed, were “negatively bouyant,” meaning they literally sank down in the water whenever they didn’t hustle to keep themselves afloat. The reason for their sudden inability to swim became obvious when scientists dissected one. Inside each tadpole were the tiny, solidified lungs that never developed.

So scientists stopped trying to find out how the tadpoles stayed young, and started looking for what would make them grow up. A thyroid hormone seemed to do the trick. The limbs sprouted. The head, as a separate structure from the body, emerged. And when the tail started to reabsorb into the body, the tadpole died — every time.

Perhaps there is a way to help the tadpoles develop into normal frogs, but we haven’t found it yet. In the meantime, eternal youth isn’t looking as good as it once did.

When it comes to ransomware, you don't always get … END_OF_DOCUMENT_TOKEN_TO_BE_REPLACED

Peyton Carr is a financial advisor to founders, … END_OF_DOCUMENT_TOKEN_TO_BE_REPLACED