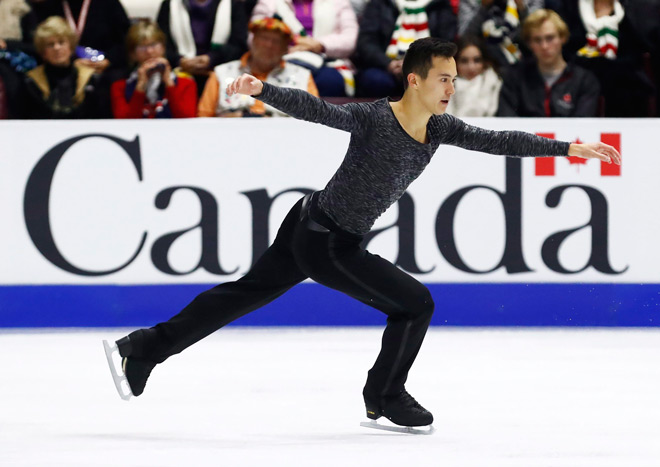 The young Russian skater Evghenia Medvedeva (16 years old) won the Skate Canada contest, from the Grand Prize of the International Artistic Skating Federation, that took place this weekend in Mississauga-Ontario, while the male victory belongs to the Canadian Patrick Chan. At her first appearance in the current edition of the Grand Prix, Medvedeva left a powerful impression and she continued her incredible series of victories. After she dominated the short program with a new personal record (76,24 points), the en titre World and European Champion conquered the Canadian public with her free program, specifies the AFP. The Russian girl was credited with 144,41 points, imposing herself with a total of 220,65 points, in front of the Canadian Kaetlyn Osmond, the surprise of this contest, after her career seemed compromised by a double fracture suffered on a foot, in 2014. Osmond accumulated 206,45 points, getting to the second place on the podium, while the third position belongs to the Japanese Satoko Mizhara, with 192,08 points.

In the male contest, Patrick Chan won his sixth victory in the Skate Canada. The triple world champion and Olympic vice-champion in 2014, the Canadian won the second place in the free program, after he managed to dominate the short program. Chan has imposed with a total of 266,95 points in front of the Japanese Yuzaru Hanyu (263,06 points), who made the best free program, but who compromised his chances at victory after he was ranked the fourth in the short program. The third place was conquered by another Canadian skater, Kevin Reynold, with a total of 245,06 points. Canada dominated, without surprise, the pairs contest, with the double world champions Meagan Duhamel and Eric Radford, as well as the dance competition, where the victory belongs to Tessa Virtue and Scott Moir, Olympic champions in 2010.

When it comes to ransomware, you don't always get … END_OF_DOCUMENT_TOKEN_TO_BE_REPLACED

Peyton Carr is a financial advisor to founders, … END_OF_DOCUMENT_TOKEN_TO_BE_REPLACED