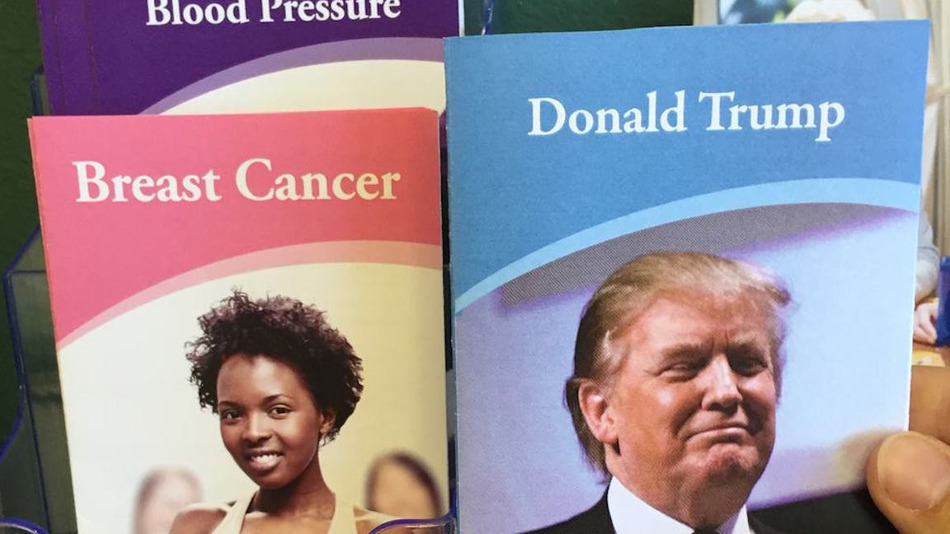 Are you suffering from the rare “Donald Trump” condition? Read on to find out! Professional photoshop troll Pleated Jeans is at it again, this time with a phony-yet-incredibly-realistic health brochure about the symptoms and treatments for the dangerous cognitive condition known as Donald Trump.

Pleated Jeans mastermind Jeff Wysaski created the brochure and then placed it in his local doctor’s office, alongside the back pain and blood pressure pamphlets.

According to the brochure, common symptoms of Donald Trump include (but are not limited to) greed, excessive bragging, lack of empathy and compulsive use of the word “losers.” Physical manifestations include a hair nest on top of the head.

Treatment options are: ignoring him, not replying to his tweets, feeding him pudding, and “giving him bits of string or bird food that he may pass along to the animal friends living in his hair.”

There is also a lengthy list of subjects to avoid in order to negate any adverse side effects of the condition.

Read the entire brochure carefully to determine if you are indeed suffering from this terrible ailment.

And if you are, YOU’RE FIRED.

When it comes to ransomware, you don't always get … END_OF_DOCUMENT_TOKEN_TO_BE_REPLACED

Peyton Carr is a financial advisor to founders, … END_OF_DOCUMENT_TOKEN_TO_BE_REPLACED