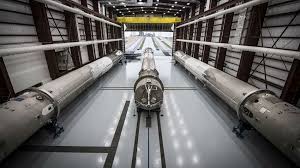 Three rockets in a hangar aren’t a big deal. Three rockets that went to space, and you successfully landed them back on Earth — one on land, two on a drone ship at sea — well, that’s worth bragging about.

SpaceX has posted a series of photos showing all three landed Falcon 9 rockets in a hangar at the Kennedy Space Center at Cape Canaveral, Florida.

SpaceX successfully landed the latest Falcon 9 earlier this month, beating the odds as the rocket’s re-entry into the atmosphere was much hotter than on any of the previous attempts.

The landings are important as they open the possibility of reusing the Falcon 9’s first stage, significantly reducing the costs of future launches.

SpaceX founder and CEO Elon Musk recently joked that, at this rate, the company would soon run out of space at its Florida hangar. He wasn’t really kidding — the company currently leases a part of the Launch Complex 39 facility at Cape Canaveral for NASA, which includes the hangar 39A that currently stores the rockets. According to The Verge, the hangar can store a total of five first stage Falcon 9 rockets.

For an even better view of the shape the recently landed Falcon 9 rocket is in, see SpaceX’s Instagram post below. According to Elon Musk, due to its high entry velocity, that rocket took more damage than the two other landed rockets.

When it comes to ransomware, you don't always get … END_OF_DOCUMENT_TOKEN_TO_BE_REPLACED

Peyton Carr is a financial advisor to founders, … END_OF_DOCUMENT_TOKEN_TO_BE_REPLACED