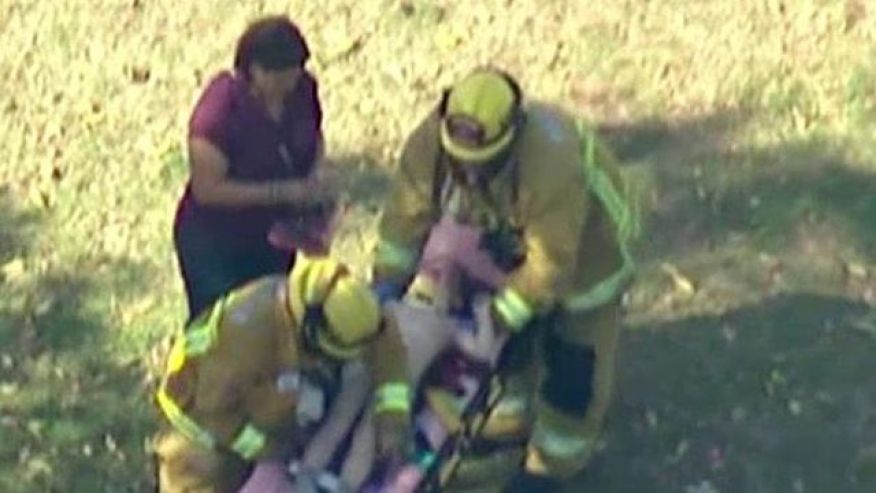 The tree is located in Brookside Park, just outside the museum grounds near the Rose Bowl.

Museum CEO Michael Shanklin told KTTV that the kids were waiting to be picked up by their parents after the day’s activities.

“The summer camp was at the end of the day during pickup,” Shanklin said. “Some parents had been there to pick up their children, others were on the way. When I received word that there was a tree that fell over and some of the Kidspace children … were affected by the tree falling, we got staff on site immediately to clear the scene, get children out of harm’s way. And at that point we got a headcount and ensured that we did have accountability for all children, and that’s really when the first responders, who did a fabulous job, arrived on scene.”

Museum marketing manager Tim Scheidler said Aal of the 33 day campers were all accounted for and the museum planned to reopen as scheduled on Wednesday.

“I heard a tree crack and then I turned around and I saw little kids running and then I saw the tree fall on top of the little kids, maybe about five or seven of them,” Greg Prodigalidad told KABC-TV.

Prodigalidad said he and some parents rushed over and began pulling children free of the branches.

The Fire Department dispatched its urban search-and-rescue team to use power tools to cut apart the tree to ensure no one was trapped underneath.

Derderian said six of the injured children were treated at the scene for cuts, bumps and bruises. The two listed in critical condtion were taken to a hospital, although their status could change after doctors evaluate them.

All the children were alert and able to talk, she said.

Hanna Lin of Altadena, who volunteers at the museum, said her daughters, ages 6 and 7, attended the camp. They were crying and shaken up but escaped injury, she told KABC-TV.

“I myself saw two children carried out on stretchers and they were pretty bloody. That brought tears to my eyes,” she said. “Apparently they were doing arts and crafts directly under the tree when it fell on them.”

It was unclear what made the pine topple on a warm, clear summer day with minimal winds.

California is in the midst of a severe drought that has persisted for several years. But it wasn’t immediately known if that could have played any role.

“We are bringing out an independent arborist to investigate what could have caused this,” Derderian said.

When it comes to ransomware, you don't always get … END_OF_DOCUMENT_TOKEN_TO_BE_REPLACED

Peyton Carr is a financial advisor to founders, … END_OF_DOCUMENT_TOKEN_TO_BE_REPLACED