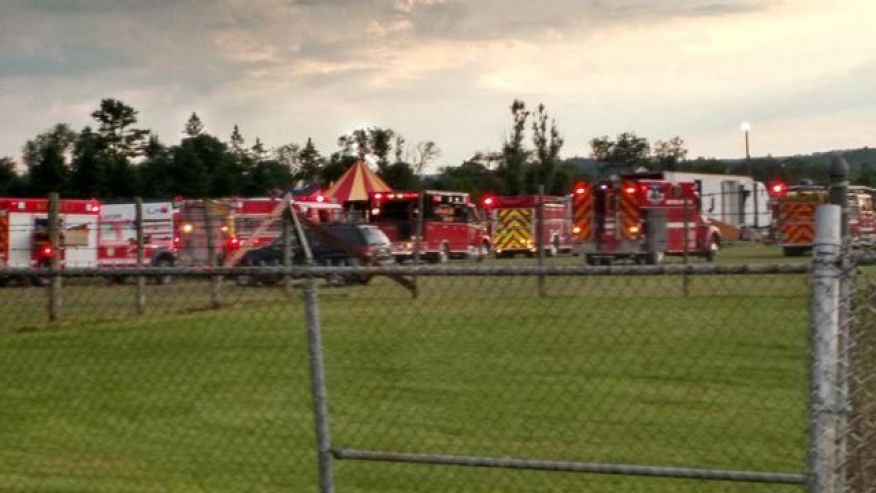 Officials said a father and his daughter were killed, and at least 22 others were injured, after a circus tent collapsed when a severe storm raked a New Hampshire fairground Monday night. The accident happened at around 5:30 p.m. ET as the first of two scheduled circus shows was getting underway.

Sarasota, Fla.-based Walker International Events was scheduled to do the performances Monday before moving on to Vermont on Tuesday. The company did not have an immediate comment. The Union Leader reported that the second show was scheduled to begin at around 7:30 p.m.

New Hampshire Gov. Maggie Hassan announced that the state’s Emergency Operations Center had been activated and a disaster response team was heading to the area.

“We all this morning have heavy hearts,” Hassan told WMUR-TV early Tuesday. “We lost two lives — a father and a daughter — at an event that was supposed to be fun.”

Lancaster has a population of around 3,500 people and is located 90 miles north of New Hampshire’s capital, Concord. Degnan said that around 100 people were in the tent when it collapsed.

Degnan said the injured were taken to four regional hospitals. Emergency officials said 15 people were transported by ambulance, while other injured victims were able to drive themselves. Conditions of the injured were not immediately known.

“There were a lot of casualties,” Lancaster Selectman Leo Enos told the Union Leader. “Some of them were able to go to the hospital themselves without the use of an ambulance.”

The collapse comes a day after one man died and more than a dozen were injured when a tent where people had sought shelter during a brief storm blew off its moorings and fell on some of the crowd at a festival in a Chicago suburb. The annual celebration known as the Prairie Fest had attracted about 5,000 people when the tent collapsed.

The popular Lollapalooza music festival in Chicago’s Grant Park briefly shut down Sunday afternoon due to the weather, then resumed less than an hour later. Organizers ended the final day of the festival 30 minutes early Sunday night when another storm hit the area.

When it comes to ransomware, you don't always get … END_OF_DOCUMENT_TOKEN_TO_BE_REPLACED

Peyton Carr is a financial advisor to founders, … END_OF_DOCUMENT_TOKEN_TO_BE_REPLACED