You are here: Home / Featured / Firefighters Gaining Ground Against California’s Deadliest Ever Blazes 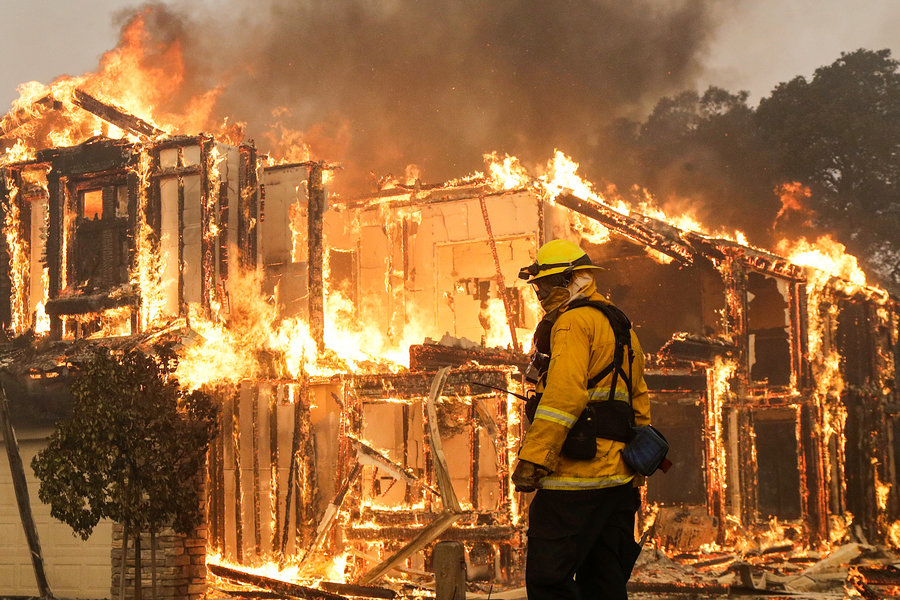 Firefighters began gaining ground on wildfires that killed at least 40 people in the past week, the deadliest blazes in California’s history, as winds eased and searchers combed charred ruins for more victims with hundreds still missing.

Two of the three most destructive Northern California fires were more than half contained early on Monday, and some residents who fled the flames in hard-hit Sonoma County could be allowed to return home later in the day, officials said.

More than 5,700 structures were destroyed by more than a dozen wildfires that ignited a week ago and consumed an area larger than New York City. Entire neighborhoods in the city of Santa Rosa were reduced to ashes.

“Overall, things are feeling optimistic. We’re very cautious about that,” said Brad Gouvea, California Department of Forestry and Fire Protection incident commander. “You’d never know it’s the middle of October in Sonoma County and have fire behavior like this.”

Warm and very dry weather is forecast to continue through Monday, the National Weather Service said. Rain could arrive on Thursday after a cooling trend, it said. 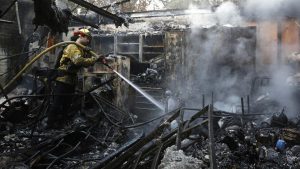 y from populated areas. Better weather and additional equipment and manpower made available as other fires died down had also helped.

“Before we were kind of chasing the fire,” he said.

About 11,000 firefighters supported by air tankers and helicopters are battling blazes that have consumed more than 217,000 acres (88,000 hectares).

“Once it’s safe to go through, we’ll search every structure,” she said.

Twenty-two people were killed in Sonoma County and 174 were still listed as missing there, although the number has dropped from 235 on Saturday as more people checked in with authorities.

Evacuation orders were lifted for the picturesque Napa Valley resort town of Calistoga, whose 5,000 residents were ordered out by authorities four days ago with fire just miles from downtown.

RETURNING TO THE UNKNOWN

Some evacuees being housed at a Sonoma raceway hoped to return home.

Retiree Stephen Garner, 68, of Sonoma, has been camped with his wife in the couple’s recreational vehicle.

“As far as we know our house is OK, but that’s the hard part, you don’t know,” he said.

In Redwood Valley, a scorched Mendocino County town of about 1,700 people, Jami Flores and her family sifted through the ruins of their two-story rental home, which was reduced to rubble.

Flores, her husband and daughter fled Monday morning after being awoken by the smell of smoke, not uncommon in the area. Seeing a red haze, they rushed to leave amid falling ash and arriving firefighters.

“The mountain was on fire,” Flores said. Now she wonders, “Where do we all go next?”

The fast-moving fires north of San Francisco remained a danger, with thousands ordered to leave their homes at the weekend.

Firefighters gained control of two of the deadliest fires in wine country’s Napa and Sonoma counties: The Tubbs fire was 60 percent contained and the Atlas fire 65 percent contained, Cal Fire said. Nearly half of the Redwood Valley fire, which alone is responsible for eight deaths in Mendocino County, was extinguished by late Sunday.

The 40 confirmed fatalities make the fires California’s deadliest since record-keeping began, surpassing the 29 deaths from the Griffith Park fire of 1933 in Los Angeles.

At least a dozen Napa Valley and Sonoma County wineries were damaged or destroyed, throwing the state’s wine industry and related tourism into disarray.

Firefighters from Oregon, Washington, Arizona, Colorado, Nevada, Utah and New York are helping battle the blazes. Cal Fire estimated the fires would be contained by Friday.

The year’s wildfire season is one of the worst in U.S. history, with nearly 8.6 million acres (3.4 million hectares) burned by Oct. 13, according to the National Interagency Fire Center. The worst on record for the same period in a year was 9.3 million acres in 2015.

When it comes to ransomware, you don't always get … END_OF_DOCUMENT_TOKEN_TO_BE_REPLACED

Peyton Carr is a financial advisor to founders, … END_OF_DOCUMENT_TOKEN_TO_BE_REPLACED