You are here: Home / World / First Draft: Today in Politics: Jeb Bush Is Set to Make Official What Was Widely Known 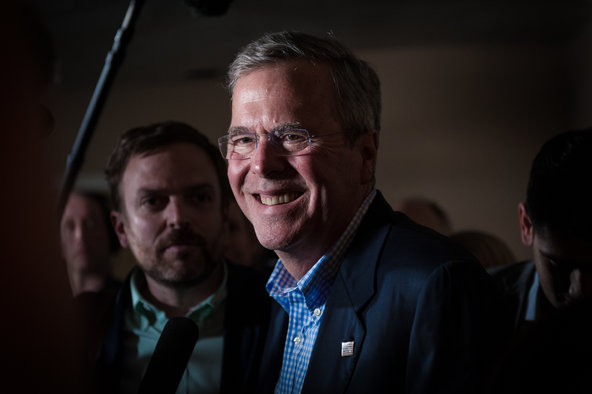 Good Monday morning from Washington, where, yet again, there is work to be done and drama to watch over the trade bill. But after this week, nearly every hopeful will be formally accounted for on the campaign trail, as Hillary Rodham Clinton held her official kickoff rally on Saturday and Jeb Bush tells us he is, indeed, running for president.

After a six-month period of proto-candidacy, Mr. Bush on Monday will declare at a rally in Miami his plan to seek the office once held by his father and his brother. Mr. Bush, the former Florida governor, is the second candidate to announce his plans in Miami; Senator Marco Rubio, his former protégé, held his rally at the city’s Freedom Tower in April.

The speech, according to his aides, will focus on three themes: his accomplishments as governor, his “heart” to help people facing obstacles in their lives and his desire to earn every vote without compromising his views. To that end, the crowd at Miami Dade College is expected to be heavily Hispanic, a group Mr. Bush’s allies believe he will appeal to in a general election.

His campaign slogan — Jeb! — was unveiled to some mockery on Twitter on Sunday, but it is virtually identical to the one he used in his races for governor, which, his aides argued, shows consistency.

Though speeches are not typically Mr. Bush’s strong suit — he tends to fare better in question-and-answer forums — the event represents something of a reset after a rocky period of seeming unsure how to address his lineage or how to frame an economic message. It is a chance to remind the party’s donors and elites why he was once thought to be Republicans’ best hope of regaining the White House. Since January, his poll numbers have stalled, and his struggle to articulate a clear answer on whether he would have invaded Iraq in 2003 mystified many party leaders.

Mr. Bush’s speech will also be compared with Mrs. Clinton‘s event in New York City on Saturday, a string of policy points that appealed to her party’s base.

What We’re Watching This Week

Donald Trump, who received a 27 percent favorability rating from voters in a Des Moines Register poll while 58 percent said they would never vote for him, will announce his presidential intentions on Tuesday, “a big day for our country.”

There will be two large gatherings of candidates this week. From Wednesday to Friday, the National Association of Latino Elected and Appointed Officials, or Naleo, will hold its annual conference in Las Vegas, including a Republican candidate forum on Wednesday featuring Ben Carson, a retired neurosurgeon; and a Democratic forum on Thursday featuring Mrs. Clinton and Senator Bernie Sanders of Vermont.And on Wednesday through Saturday, nearly the entire Republican field will participate in the Faith & Freedom Coalition’s Road to Majority Conference in Washington.

With only a few hopefuls yet to become official candidates, there are no wasted trips to the early states as strategies are honed and territories are charted. When not gathered at the Road to Majority event this week, Carly Fiorina, the former Hewlett-Packard executive, will speak to the Conservative Party of New York; Senator Rand Paul of Kentucky will be in South Carolina; Senator Ted Cruz of Texas will be in Iowa; and Gov. Chris Christie of New Jersey, who has not declared but has shown increasing signs that he will do so soon, will hold a town-hall-style meeting in New Hampshire.And Mr. Sanders will travel to Los Angeles on Friday for an appearance on “Real Time With Bill Maher.”

Obama and Congress Consider the ‘What Now?’ on Trade

House Republican leaders will confer on Monday on how to move forward after Friday’s stinging trade defeat, with congressional free-trade advocates looking for President Obama to deliver more Democratic votes over assistance for displaced workers.

Speaker John A. Boehner and Representative Kevin McCarthy, the California Republican and majority leader, will have to decide if it makes sense to try again on worker aid or whether there is another way around what Robby Mook, Mrs. Clinton’s campaign manager, described on Sunday on CBS’s “Face the Nation” as “parliamentary this and that.”

This and that though it may be, House Democrats managed to derail the push toward a trade deal by opposing the worker aid, which they have historically supported.

House Republicans could try to persuade more of their members to back the trade assistance in order to reach the broader goal of giving Mr. Obama expedited trade negotiating power — a tough sell. Or the White House could press more Democrats to back the president, though there appeared to be little movement on that front over the weekend.

With the House and the Senate passing new trade powers in separate votes, Republicans could also try to get the measure to the president’s desk without the worker assistance. Finding the solution, if there is one, will not be easy.

Mrs. Clinton taking on Mr. Obama in Iowa over free trade? Mrs. Clinton offered a mini-tutorial to Mr. Obama there on Sunday on how to negotiate the Trans-Pacific Partnership pact — like a flashback to their fight for the 2008 Democratic nomination.

Mrs. Clinton’s decision to chime in on important Washington business reflects the new phase of the campaign that she began on Saturday in her first major public rally. Through April and May, campaign advisers compared the initial period of her candidacy with the preseason in the National Football League. Starting with her Iowa trip on Saturday night and Sunday, the events on her schedule now carry particular heft, as Mrs. Clinton will be under increased pressure to opine on topics like trade and field questions from reporters.

It is no surprise that she will engage most directly with voters in a place she feels most comfortable: New Hampshire. On Monday, she will discuss early childhood education with residents of the state that handed her an unlikely primary victory in 2008. She will also host a kickoff party at an orchard near Concord and attend a dinner with Democratic officials in Manchester.

From there, she will continue on to South Carolina and finish the blitz of events with her speech to Naleo. She has already said she would try to go further than Mr. Obama to give immigrants living in the country illegally a path to citizenship, a position that will most likely make her more popular than some of the Republicans who will also address the group.

Our Favorites From Today’s Times

After saying very little on the trade deal since she declared her candidacy, and despite repeated calls to do so from her Democratic rivals, Mrs. Clinton in her speech on Sunday said that Mr. Obama should “listen to” Representative Nancy Pelosi, the House minority leader, about Democratic concerns on the deal.

Mr. Obama‘s failed effort to corral Democrats on trade, Maureen Dowd argues, has shown that “at this pivotal moment for his legacy at home and abroad, his future reputation is mortgaged to past neglect.”

The Upshot looks at Mr. Bush‘s “surprising struggle with moderates.”

Mr. Bush‘s expected announcement is a primary focus across publications, as Bloomberg says that “nearly three-quarters of Florida voters have never seen” the former governor on a ballot; and The Wall Street Journal takes a close look at his obstacles as he “navigates” his family legacy.

And for more on Bush world, Politico examines its money machine, finding that Mr. Bush rarely takes more than a day or two away from fund-raising.

Mrs. Clinton‘s speech has also been the talk of the trail. The Des Moines Register says she is hearing an “eagerness for talk” of a female presidency; and Gail Sheehy, writing in Politico, said that by embracing her “60s surge,” Mrs. Clinton “finally appears to be beyond carefully constructing her identities or letting her advisers to design the persona she presents.”

And the move by Fox News to limit its Republican debate to 10 candidates has been criticized, not surprisingly, by those most at risk of falling outside the chosen. But the two most recent winners of the Republican nomination, Time writes, have also questioned the move.

When it comes to ransomware, you don't always get … END_OF_DOCUMENT_TOKEN_TO_BE_REPLACED

Peyton Carr is a financial advisor to founders, … END_OF_DOCUMENT_TOKEN_TO_BE_REPLACED