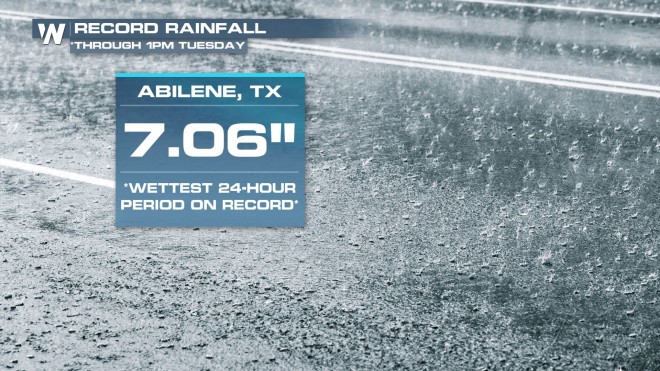 Flooding rainfall from Indiana to Texas set records and washed out roads for a nearly thousand-mile stretch on Tuesday, and more rain is possible for some of the hardest-hit areas.

Perhaps worst-hit were the Ozarks of far southern Missouri, where extensive flooding was reported in Cassville, Missouri and nearby Branson also saw several reports of washed-out roads as well.

In Paducah, Kentucky, over five inches of rain was reported on Tuesday morning, leading to flooding in the area. The Oak Crest apartment complex was hit with damage, according to WPSD in Paducah, and power was out in parts of Paducah after storms moved through just before sunrise on Tuesday morning.

Abilene, Texas broke its all-time 24-hour rainfall record on Tuesday, with at least 7.15″ of rainfall as of 1:40pm CDT. Thirty-four water rescues were reported in the city on Tuesday morning, according to local TV station KTXS, and local officials are urging residents to stay off local roadways until the water subsides.

The reason for the widespread flooding rainfall? A potent cold front has slowed down considerably as it runs into a strong area of high pressure anchored over the southeastern U.S., forcing the front to stall out and dump heavy rains over the same areas.

Stay with WeatherNation for the latest on the flood potential through the afternoon and evening.

When it comes to ransomware, you don't always get … END_OF_DOCUMENT_TOKEN_TO_BE_REPLACED

Peyton Carr is a financial advisor to founders, … END_OF_DOCUMENT_TOKEN_TO_BE_REPLACED