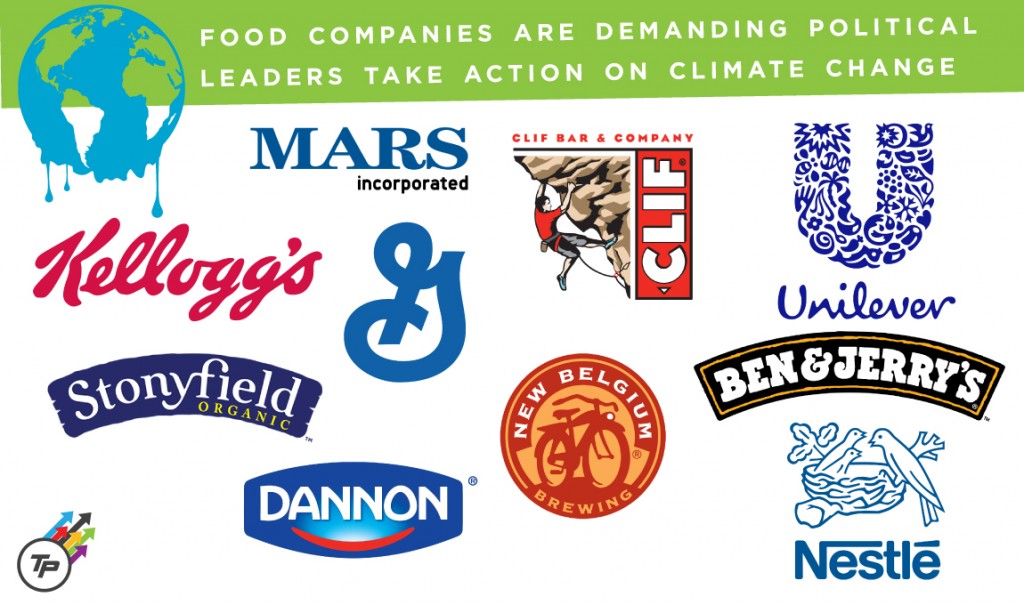 On Thursday, ten leaders from some of the world’s biggest food companies urged Congress to support a strong global agreement on climate action, in advance of the U.N. climate talks happening in Paris this December.

“The challenge presented by climate change will require all of us — government, civil society and business — to do more with less. For companies like ours, that means producing more food on less land using fewer natural resources. If we don’t take action now, we risk not only today’s livelihoods, but those of future generations,” the letter reads. “We are asking you to embrace the opportunity presented to you in Paris, and to come back with a sound agreement, properly financed, that can affect real change.”

The letter comes at a time when corporations are ramping up their own sustainability goals — just last week, Nike, Walmart, Goldman Sachs, Johnson & Johnson, Proctor & Gamble, Salesforce, Starbucks, Steelcase, and Voya Financial all committed to transitioning to 100 percent renewable energy. But at a roundtable discussion on Capitol Hill Thursday, sustainability representatives from many of the food companies represented in the letter urged their industry to go farther than just internal sustainability commitments.

“The reality is, Unilever can hit all its goals and it won’t make a difference, alone, in and of itself,” Tom Langan, external affairs director at Unilever, said during the roundtable. “We need to work together. We need governments to be involved.”

The roundtable was sponsored by Sen. Sheldon Whitehouse (D-RI) and Sen. Chris Gibson (R-NY). In his opening remarks, Whitehouse commented on the “historic” nature of the event, noting that it was the first time in a very long time that a Democratic elected official and a Republican elected official had sat side-by-side and spoken publicly about the challenges of climate change. He also noted that the food companies’ willingness to push for climate action outside of their own operations marked a change in how businesses are reacting to climate change.

“For a long time the corporate community has seen it as their role to reduce their carbon footprint, but quietly — don’t talk about it and whatever you do, don’t lobby on it. I see that changing,” Whitehouse said, adding that he hoped that Paris’ December negotiations would result in “a signed international agreement among major corporations.”

As the representatives from food corporations spoke, each reiterated their company’s commitment to sustainability. Kim Nelson, who works in external relations for General Mills, spoke of the company’s recent announcement to cut its greenhouse gas emissions throughout its entire supply chain 28 percent by 2030. Some spoke of how climate change has already impacted their business, while others spoke of unique steps their companies have taken to move towards a more resilient, sustainable business model. According to Lagan, disruptions due to climate change are expected to cost Unilever $335 million a year. Paul Bakus, president of corporate affairs at Nestle, talked about declines in the company’s pumpkin harvests, a drop he “firmly” believes is because of climate change.

At the end of their statements, each representative underscored the need for government action in the face of climate change.

“Government stepping forward is pro-planet, pro-business, and pro-people,” Barry Parkin, the chief sustainability officer at Mars, said. “There is no conflict here.”

When it comes to ransomware, you don't always get … END_OF_DOCUMENT_TOKEN_TO_BE_REPLACED

Peyton Carr is a financial advisor to founders, … END_OF_DOCUMENT_TOKEN_TO_BE_REPLACED