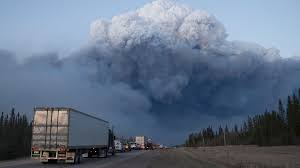 Amid record heat, dry air and strong winds, the destructive wildfire in Fort McMurray, Alberta has grown nine times larger during the course of this week. As of Friday morning, it had burned an area larger than the city of Chicago, and was still burning out of control.

The city of Chicago is 234 square miles.

On Friday, a convoy of evacuees began the long drive out of oil industry work camps north of the fire-ravaged Fort McMurray area Friday morning. They were destined for areas south of the city, and had to pass through the fire-ravaged parts of the city in order to make the transit.

This process of southbound convoys is expected to take four days, according to local authorities in Canada.

Meanwhile, a mass airlift of evacuees was expected to resume, a day after 8,000 people were flown out.

Together, we will see this through, as we do with all challenges: https://t.co/hosytdeTeC #ymmfire #fortmacfire pic.twitter.com/wi0NJHzWbI

About 25,000 evacuees moved north in the hours after Tuesday’s mandatory evacuation, where oil sands work camps that usually house employees were used to house evacuees.

But the bulk of the evacuees fled south to Edmonton and elsewhere, and officials are moving everyone south where they can get better support services.

In all, more than 80,000 people have left Fort McMurray, in the heart of Canada’s oil sands, and officials say no deaths or injuries related to the fire have been reported.

The Alberta provincial government, which declared a state of emergency, said more than 1,100 firefighters, 145 helicopters, 138 pieces of heavy equipment and 22 air tankers were fighting the fire, but Chad Morrison, Alberta’s manager of wildfire prevention, said rain is needed.

“Let me be clear: air tankers are not going to stop this fire,” Morrison said.

“It is going to continue to push through these dry conditions until we actually get some significant rain.”

Environment Canada forecast a 40 percent chance of showers in the area on Sunday and Monday, along with cooler temperatures thereafter.

However, until then, the region will still have to endure unusually mild conditions, relatively strong winds and dry air. The forecast high temperature on Saturday of 27 degrees Celsius, or 80 degrees Fahrenheit, is about 30 degrees Fahrenheit above average for this time of year.

The heat has come courtesy of a wavy flow in the jet stream known as an Omega block, so-named due to the jet stream’s resemblance to the Greek letter Omega.

The flow of air at upper levels of the atmosphere has allowed mild air to surge northward into northern Alberta, and locked in the hot and dry conditions for an entire week.

An El Niño event in the tropical Pacific Ocean contributed to a milder- and drier-than-average winter in Alberta, which has led to an anemic snow cover throughout northwest Canada. The snow that did fall vanished from the ground unusually early this spring, though this has been a trend seen throughout the high latitudes during the past few decades.

In addition, long-term trends associated with human-caused global warming include earlier spring snow melt and later starts to the winter season, which is lengthening wildfire seasons from Alaska to Alberta, and south to New Mexico.

For example, the area burned by wildfires in Alberta has more than doubled since 1970.

A study published in the Proceedings of the National Academy of Sciences in 2013 found that boreal forests, which form a ring around the world just below the Arctic Circle, have been burning at rates that are unprecedented in 10,000 years. That study tied such burn rates to warming temperatures and increased evaporation.

Global warming is also leading to more extreme fire weather days such as what occurred on Tuesday and Wednesday, with dry soils, record temperatures and strong winds.

Additional reporting by the Associated Press.

When it comes to ransomware, you don't always get … END_OF_DOCUMENT_TOKEN_TO_BE_REPLACED

Peyton Carr is a financial advisor to founders, … END_OF_DOCUMENT_TOKEN_TO_BE_REPLACED